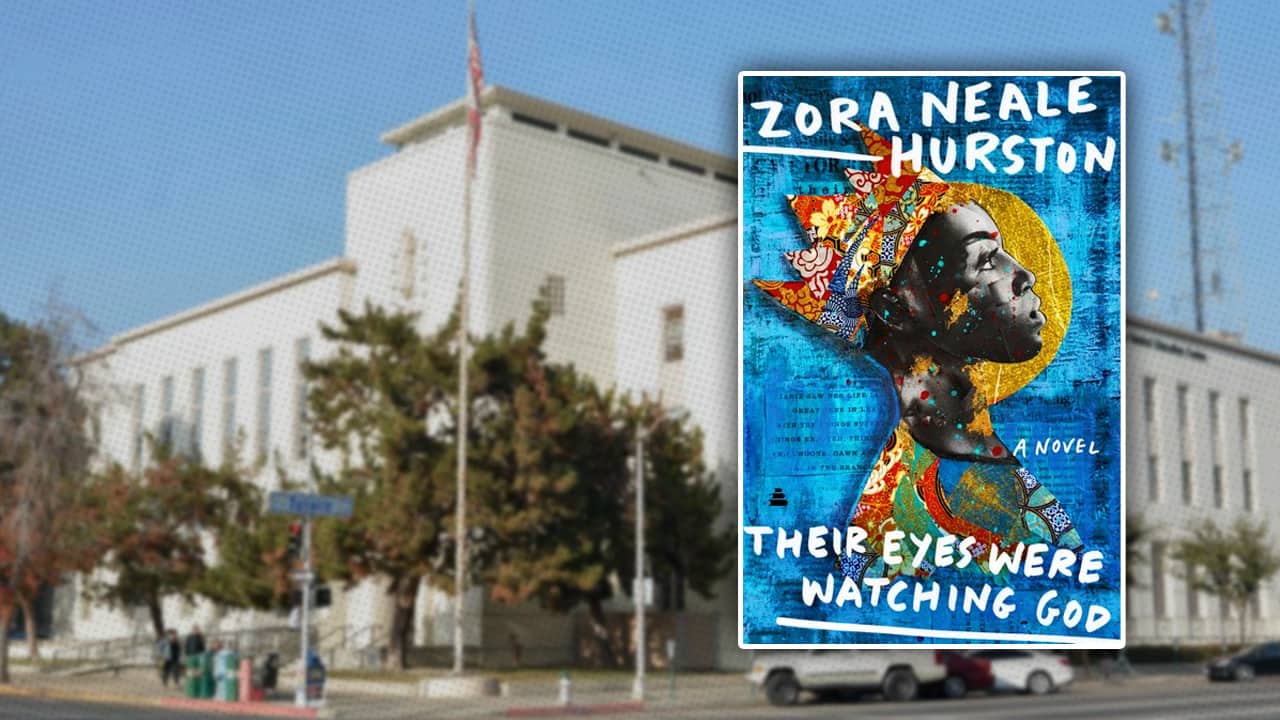 A classroom assignment connected with a novel by acclaimed author Zora Neale Hurston has embroiled Fresno Unified School District in another race-related controversy. This time the district is in the crosshairs of both the teachers union and members of the black community.
Black activists say the assignment, given by a Roosevelt High School teacher to her 11th-grade English students reading Hurston’s 1937 classic “Their Eyes Were Watching God,” is the latest example of racial insensitivity in Fresno Unified.

Listen to this article:
Meanwhile, the Fresno teachers union issued a statement late Tuesday defending the curriculum and the Roosevelt teacher. The Fresno Teachers Association’s executive board expressed outrage that the district failed to back the teacher when it issued a public apology to those who were offended by the class assignment. The assignment directed students to convert sentences from the first chapter of Hurston’s book into standard English.
To assist students with the translation, the teacher provided a copy of a worksheet developed by the Los Angeles Unified School District Academic English Mastery Program titled “African-American Language (AAVE) Common Rules List.” AAVE is the acronym for African American Vernacular English.

The controversy erupted last Thursday morning after a Roosevelt student became upset about the assignment and worksheet and sent photos to her mother, who posted them on Facebook. The post was quickly shared, with many people expressing outrage over the assignment and what they see as a lack of sensitivity on the part of the teacher and the school district.
Some commenters did note that they found the book somewhat difficult to understand because of its regional dialect.
The key issue for many critics was the worksheet’s headline, which identifies the dialect as “African-American Language,” said Elisha Henderson, chairwoman of Bullard’s African American Parents Committee. Henderson’s share of the original post expanded its audience last week.
She said the Roosevelt student, who is black, told her mother that other students started to tease her about the dialect outlined in the class assignment.
“They were talking to her like she spoke that way,” Henderson said. “We don’t talk like that.”

Debbie Darden, a west Fresno activist who helped spearhead the drive to build Gaston Middle School, said she found the assignment “very offensive” and believes the black community is being targeted by such material.
“It sets us back,” she said.
The district apparently doesn’t also teach literature in other ethnic vernaculars, Darden said. So it’s hurtful to black students when they and their classmates are exposed only to literature in black dialect, especially when other students tell them, “This is how you talk.”
“What do you gain from this assignment?” asked Darden, spokeswoman for the Black Education Coalition Organizing Network, which is holding a news conference this afternoon at the Fresno Unified headquarters downtown to talk about the district’s choice of curriculum. She said she expects it will also be a topic for discussion at tonight’s board meeting, which starts at 5:30 p.m.

In response to the social media postings, the district on Thursday issued a media statement that reported the worksheet was not part of the district’s adopted curriculum and contained sentences from Hurston’s book that “were perceived as insensitive and culturally inappropriate.”
“We deeply apologize to our students, parents and community members that have been negatively impacted by this situation,” the district statement said. “Our team immediately started an investigation, and the investigation is ongoing.”
That statement, and subsequent news media coverage, resulted in an undeserved and public shaming of the Roosevelt teacher, the Fresno Teachers Association executive board said Tuesday in its statement.

In a lengthy blog post, the union questions why the district — and the people who posted their outrage on social media — did not take time to find out more about the assignment.
As for the district’s contention that the material was not board-approved, the union said the Springboard curriculum, which includes lessons on Hurston, is board-approved.
In fact, the union said, the teacher’s lesson is an example of Culturally Responsive Teaching, which district leaders have advocated for.
“The fallout from this situation has exposed how FUSD leadership, though well-intentioned, might be misguided as they pursue implementation of educational practices like Culturally Responsive Teaching, without knowledge of what it looks like in the classroom,” the union’s blog post says.
The union noted that the Los Angeles Unified rules list was drawn from a book by educator Sharroky Hollie, “Culturally and Linguistically Responsive Teaching and Learning.” In the video below, Hollie talks about students who speak “black English” or “African-American Language” as a home language.

Racial bias and disparity does exist in Fresno Unified, and needs to be addressed by all stakeholders, the union blog post said. “The pain associated with those concerns is real, and we need to heal that pain by developing collaborative solutions. … In this specific situation, there’s also pain when community members and district leadership rush to judgment because they hurt the cause, the allies, and the students whom they are advocating (for),” the union said.
The blog post closed by saying the community activists, district leadership, and the school board owe an apology to the Roosevelt teacher.
District spokeswoman Nikki Henry told GV Wire that the district continues to stand by its original statement. “FTA has the right to their own opinion, which we will not be commenting on,” she said. “As we gathered all of the information around this situation, we remain committed to continuing to lean into our cultural proficiency work across our entire district.”
The district was rocked last year after videos surfaced of a Bullard cheerleader in blackface and using inappropriate racial language. Although some people said the girl in the video should have been dismissed from the squad, she was allowed to remain after participating in restorative justice activities at the northwest Fresno school.

In October, the ACLU of Northern California in October filed a formal complaint on behalf of Henderson’s daughter and another Bullard student, alleging that the blackface incident was symbolic of the hostile environment black students face at Bullard.