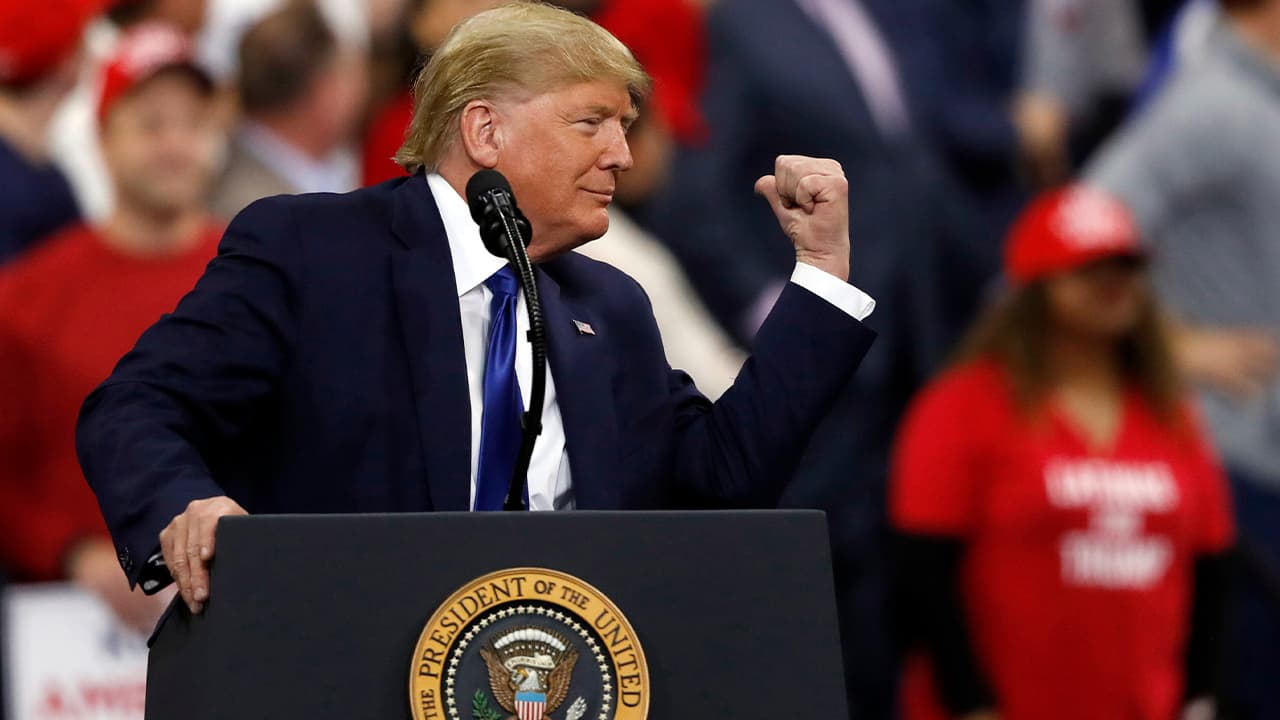 
“More than 300,000 people under Obama, 300,000 people, left the workforce. Under just three years of my administration, 3.5 million people have joined the workforce.” — President Donald Trump
Here’s a look at some statements from both stages, in Milwaukee and Des Moines, Iowa:
TRUMP: “More than 300,000 people under Obama, 300,000 people, left the workforce. Under just three years of my administration, 3.5 million people have joined the workforce.”
THE FACTS: Trump is wrong about Barack Obama’s record.
More than 5 million people joined the U.S. labor force during Obama’s presidency, according to Labor Department figures. These gains reflect the recovery from the Great Recession as well as population growth. But Trump does have reason to celebrate as well. More than 4.8 million people have joined the labor force in just three years of his presidency.
_____
TRUMP: “Mexico’s paying for the wall. … You know that. It’s all worked out.”
THE FACTS: Mexico isn’t paying for Trump’s long-promised border wall.
Trump has argued that the updated trade agreement with Canada and Mexico will pay for the wall because of economic benefits he predicts will come from the deal. Nothing in the trade agreement would cover or refund the construction cost or require a payment from Mexico.
Instead, he is assuming a wide variety of economic benefits that can’t be quantified or counted on. For example, he has said the deal will dissuade some U.S. companies from moving operations to Mexico and he credits that possibility as a payment by Mexico.
The agreement preserves the existing liberalized environment of low or no tariffs among the U.S., Mexico and Canada, with certain improvements for each country.
Although his 2016 campaign left open the possibility that Mexico might somehow contribute to the cost indirectly, Trump repeatedly roused his crowds with the straight-ahead promise: “I will have Mexico pay for that wall.”
___
JOE BIDEN: “I was a single parent too. When my wife and daughter were killed, my two boys I had to raise. I was a senator — a young senator — I just hadn’t been sworn in yet. I was making $42,000 a year. I commuted every single solitary day to Wilmington, Delaware — over 500 miles a day, excuse me, 250 miles a day — because I could not afford … child care. It was beyond my reach.”
THE FACTS: Child care costs are burdensome for most working U.S. parents, but the former vice president wasn’t quite as broke as claimed when suggesting he took the train back to Delaware because child care costs were too high.
A $42,000 salary might not sound like much today. In fact, Senate records show it was actually $42,500. But Biden joined the Senate after winning his seat in 1972. Adjusted for inflation, he was earning more than $256,000 in today’s dollars. That is more than four times the median household income.
___
BERNIE SANDERS: “Medicare for all … will cost substantially less than the status quo.”
THE FACTS: There’s no guarantee that “Medicare for All” will cost less.

“Medicare for all … will cost substantially less than the status quo.” — Sen. Bernie Sanders
The nonpartisan Congressional Budget Office said in a report last year that total spending under a single-payer system like Sanders is calling for “might be higher or lower than under the current system depending on the key features of the new system.”
Those features have to do with the design of the system, questions like payment rates for hospitals and doctors, and whether patients are required to pay part of the cost of their care. The Vermont senator says his plan would require no cost-sharing from patients, no copays and no deductibles. But completely free care could trigger a surge in demand for medical services, raising costs. Other countries that provide coverage for all do use cost-sharing to help keep spending in check.
A research report last year by the nonprofit Rand think tank estimated that Medicare for All would modestly raise total U.S. health spending.
The study modeled a hypothetical scenario with a plan similar to Sanders’ legislation. It found that total U.S. health care spending would be about $3.9 trillion under Medicare for All in 2019, compared with about $3.8 trillion under the status quo. BIDEN: “I was asked to bring 156,000 troops home from that war, which I did. I led that effort.”
THE FACTS: Biden is roughly right about bringing troops home, but he didn’t mention that the U.S. had to send some back.
President Barack Obama did designate Biden to take the lead in pulling U.S. forces out of Iraq and coordinating efforts to maintain stability in Baghdad. His results were mixed. Biden and Obama failed to win agreement from the Iraqi government to keep a limited number of U.S. troops there after December 2011. That was the deadline for a complete U.S. pullout under a deal negotiated by the Bush administration in late 2008. Biden was still vice president when Obama was compelled to return American troops to Iraq in 2014 after the rise of the Islamic State extremist group.
___
TRUMP: “Under the Trump economy, the lowest-paid earners are reaping the biggest, fastest and largest gains. … Earnings for the bottom 10% are rising faster than earnings for the top 10%, proportionally.”

“Under the Trump economy, the lowest-paid earners are reaping the biggest, fastest and largest gains. … Earnings for the bottom 10% are rising faster than earnings for the top 10%, proportionally.”  — President Donald Trump
THE FACTS: Trump’s claim that the biggest pay hikes are going to the poor is misleading. The top 10% of earners saw the biggest raises of any income bracket over the past year. Their usual weekly earnings jumped 8% — or $168 — from a year ago, according to the Labor Department.
The bottom 10% did fare reasonably well, likely reflecting some of the gains from minimum wage hikes. Their usual weekly incomes grew 7%, or $30. When the Labor Department looked at the gains by quartile, weekly earnings grew at faster rates at the top levels than the bottom 25%.
___
TRUMP: “We’ve created 7 million jobs since the election including more than 1 million manufacturing and construction jobs. Nobody thought that was possible.”
THE FACTS: Those numbers are less impressive than Trump claims.
Government figures do back the president’s statements. But the job gains under Trump over the past three years were lower than during the final three years of Barack Obama’s presidency. More than 8 million jobs were added during that period under Obama, including 1.2 million combined in manufacturing and construction. What these figures suggest is that much of the job growth under Trump reflects the momentum from a recovery that officially began in the middle of 2009.
___
TRUMP: “Our military has been totally rebuilt.”
THE FACTS: It hasn’t.
It’s true that his administration has accelerated a sharp buildup in defense spending, including a respite from what the U.S. military considered to be crippling spending limits under budget sequestration.
But a number of new Pentagon weapons programs, such as the F-35 fighter jet, were started years before the Trump administration. And it will take years for freshly ordered tanks, planes and other weapons to be built, delivered and put to use.

Sonoma County Prepares to Sue PG&E for Damages From Fire