NEW YORK — David Stern had basketball as a passion and law as a profession, one he figured he could return to if a job at the NBA didn’t work out.

“Without David Stern, the NBA would not be what it is today. He guided the league through turbulent times and grew the league into an international phenomenon, creating opportunities that few could have imagined before.” — Hall of Famer Michael Jordan

Instead he went to Europe, Asia and plenty of other places around the world, bringing with him a league that was previously an afterthought in the U.S. and turning it into a global powerhouse.

Stern, who spent 30 years as the NBA’s longest-serving commissioner and one of the best in sports history, died Wednesday. He was 77.

“Without David Stern, the NBA would not be what it is today,” Hall of Famer Michael Jordan said. “He guided the league through turbulent times and grew the league into an international phenomenon, creating opportunities that few could have imagined before.”

Stern suffered a brain hemorrhage on Dec. 12 and underwent emergency surgery. The league said he died with his wife, Dianne, and their family at his bedside.

“The entire basketball community is heartbroken,” the National Basketball Players Association said. “David Stern earned and deserved inclusion in our land of giants.”

He Had a Hand in Nearly Every Initiative

Stern had been involved with the NBA for nearly two decades before he became its fourth commissioner on Feb. 1, 1984. By the time he left his position in 2014 — he wouldn’t say or let league staffers say “retire,” because he never stopped working — a league that fought for a foothold before him had grown to a more than $5 billion a year industry and made NBA basketball perhaps the world’s most popular sport after soccer.

“Because of David, the NBA is a truly global brand — making him not only one of the greatest sports commissioners of all time, but also one of the most influential business leaders of his generation,” said Adam Silver, who followed Stern as commissioner. “Every member of the NBA family is the beneficiary of David’s vision, generosity and inspiration.”

“We lost a great visionary,” James said. “Him and Dr. James Naismith are the two most important people for the game of basketball. Dr. Naismith because he invented the game and David for his vision, his vision to make this game global.”

Thriving on good debate in the boardroom and good games in the arena, Stern would say one of his greatest achievements was guiding a league of mostly black players that was plagued by drug problems in the 1970s to popularity with mainstream America.

He had a hand in nearly every initiative to do that, from the drug testing program, to the implementation of the salary cap, to the creation of a dress code.

But for Stern, it was always about “the game,” and his morning often included reading about the previous night’s results in the newspaper — even after technological advances he embraced made reading NBA.com easier than ever. 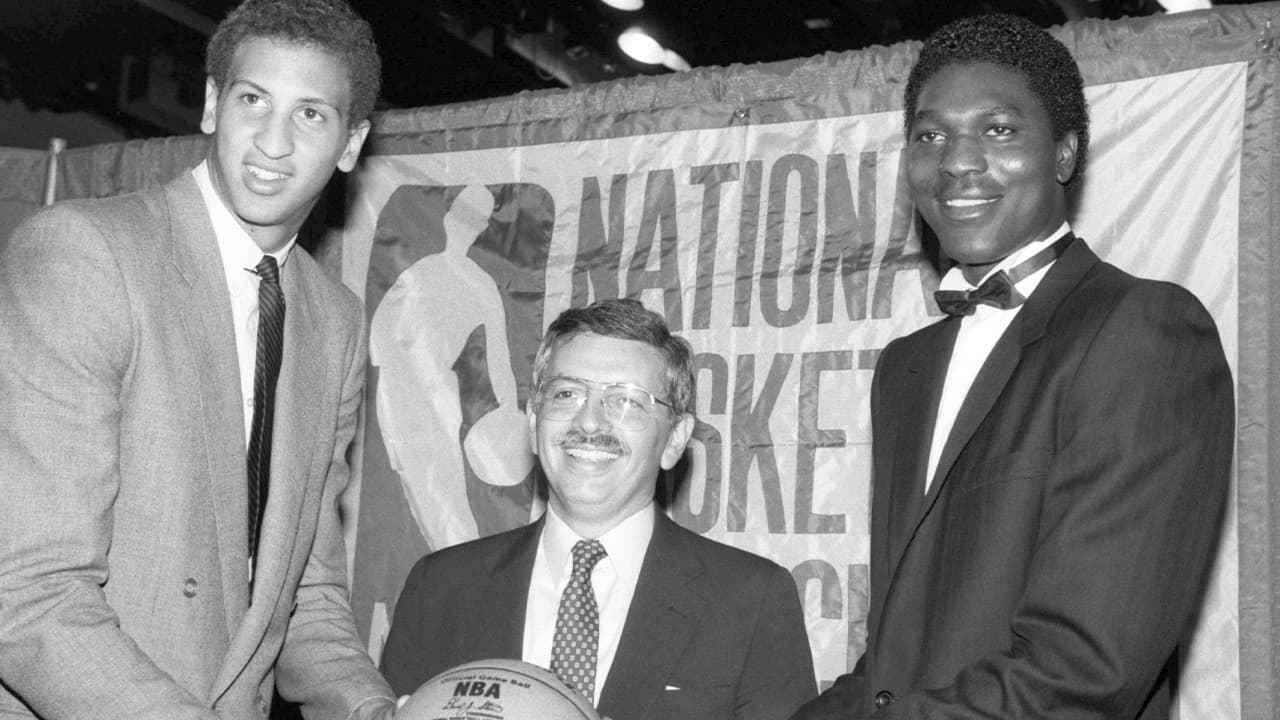 FILE – In this June 19, 1984 file photo, NBA commissioner David Stern, center, is flanked by Akeem Olajuwon, right, the No. 1 pick overall by the Houston Rockets, and Sam Bowie, the No. 2 pick overall by the Portland Trail Blazers at the NBA Draft in New York. David Stern, who spent 30 years as the NBA’s longest-serving commissioner and oversaw its growth into a global power, has died on New Year’s Day, Wednesday, Jan. 1, 2020. He was 77. (AP Photo/Marty Lederhandler, File)

“The game is what brought us here. It’s always about the game and everything else we do is about making the stage or the presentation of the game even stronger, and the game itself is in the best shape that it’s ever been in,” he said on the eve of the 2009-10 season, calling it “a new golden age for the NBA.”

“The game is what brought us here. It’s always about the game and everything else we do is about making the stage or the presentation of the game even stronger, and the game itself is in the best shape that it’s ever been in.” — David Stern

One that was largely created by Stern during a three-decade run that turned countless ballplayers into celebrities who were known around the globe by one name: Magic, Michael, Kobe, LeBron, just to name a few.

Stern oversaw the birth of seven new franchises and the creation of the WNBA and NBA Development League, now the G League, providing countless opportunities to pursue careers playing basketball in the United States that previously weren’t available.

Not bad for a guy who once thought his job might be a temporary one.

Stern had been the league’s outside counsel from 1966 to ’78 and spent two years as the NBA’s general counsel, figuring he could always go back to his legal career if he found things weren’t working out after a couple of years.

Instead, after serving as the NBA’s executive vice president of business and legal affairs from 1980-84, he replaced Larry O’Brien as commissioner.

Overlooked and ignored only a few years earlier, when it couldn’t even get its championship round on live network TV, the NBA saw its popularity quickly surge thanks to the rebirth of the Lakers-Celtics rivalry behind Magic Johnson and Larry Bird, followed by the entrance of Jordan just a few months after Stern became commissioner. 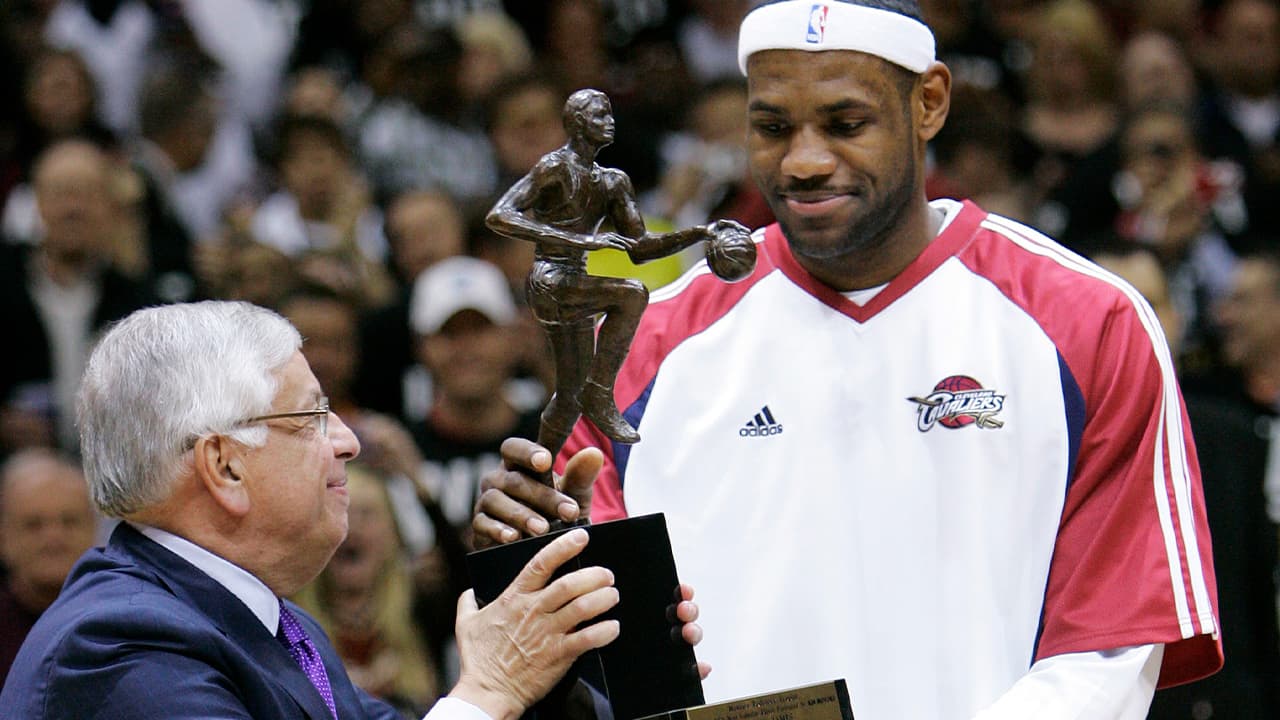 FILE – In this Tuesday, May 5, 2009 file photo, NBA commissioner David Stern, left, presents Cleveland Cavaliers’ LeBron James with the 2008-2009 NBA Most Valuable Player trophy before the Cavaliers’ Eastern Conference basketball semifinals game against the Atlanta Hawks in Cleveland. David Stern, who spent 30 years as the NBA’s longest-serving commissioner and oversaw its growth into a global power, has died on New Year’s Day, Wednesday, Jan. 1, 2020. He was 77. (AP Photo/Mark Duncan, File)

He Was Fiercely Protective of His Players and Referees

“There are no words that can really describe the far-reaching impact of Commissioner Stern’s brilliance, vision, fairness and hard work over so many years,” Bird said. “When you think of all that he accomplished worldwide on behalf of thousands of players, so many fans, all of the jobs he created for team and arena employees and all of the people that benefitted from the many layers of growth in the sport and industry that David spearheaded and then passed on to others, there is no doubt Commissioner Stern lifted the NBA to new heights and he will be greatly missed by all of us.”

Under Stern, the NBA would play nearly 150 international games and be televised in more than 200 countries and territories, and in more than 40 languages, and the NBA Finals and All-Star weekend would grow into international spectacles. The 2010 All-Star game drew more than 108,000 fans to Dallas Cowboys Stadium, a record to watch a basketball game.

“It was David Stern being a marketing genius who turned the league around. That’s why our brand is so strong,” said Johnson, who announced he was retiring because of HIV in 1991 but returned the following year at the All-Star Game with Stern’s backing.

“It was David Stern who took this league worldwide.”

He was fiercely protective of his players and referees when he felt they were unfairly criticized, such as when members of the Indiana Pacers brawled with Detroit fans in 2004, or when an FBI investigation in 2007 found that Tim Donaghy had bet on games he officiated, throwing the entire referee operations department into turmoil. With his voice rising and spit flying, Stern would publicly rebuke media outlets, even individual writers, if he felt they had taken cheap shots.

It Was Stern Who Faced the Greatest Criticism

But he was also a relentless negotiator against those same employees in collective bargaining, and his loyalty to his owners and commitment to getting them favorable deals led to his greatest failures, lockouts in 1998 and 2011 that were the only times the NBA lost games to work stoppages. Though he had already passed off the heavy lifting to Silver by the latter one, it was Stern who faced the greatest criticism, as well as the damage to a legacy that had otherwise rarely been tarnished.

“As tough an adversary as he was across the table, he never failed to recognize the value of our players, and had the vision and courage to make them the focus of our league’s marketing efforts — building the NBA into the empire it is today.” — NBPA

“As tough an adversary as he was across the table, he never failed to recognize the value of our players, and had the vision and courage to make them the focus of our league’s marketing efforts — building the NBA into the empire it is today,” the NBPA said.

David Joel Stern was born Sept. 22, 1942, in New York, where he grew up a Knicks fan and worked in his fathers’ deli. A graduate of Rutgers University and Columbia Law School, he was dedicated to public service, launching the NBA Cares program in 2005 that donated more than $100 million to charity in five years.

He would begin looking internationally soon after becoming commissioner and the globalization of the game got an enormous boost in 1992, when Jordan, Johnson and Bird played on the U.S. Olympic Dream Team that would bring the sport a new burst of popularity while storming to the gold medal in Barcelona.

Stern capitalized on that by sending NBA teams to play preseason games against other NBA or international clubs, and opened offices in other countries. The league staged regular-season games in Japan in 1991 and devoted significant resources to China, and Stern’s work there would pay off in 2008 when basketball was perhaps the most popular sport in the Beijing Olympics.

Growth slowed near the end of his tenure. The worldwide economic downturn in the late 2000s all but wrecked his longtime hopes of expanding overseas and led to the second lockout, with owners wanting massive changes to the salary structure after losing hundreds of millions of dollars a year on their basketball teams, on top of losses in their personal businesses.

He helped get them, and the league was thriving again by the time he left office. Stern said he felt the time was right, confident that he had groomed a worthy successor in Silver.

Silver, who worked for Stern for 22 years, is praised for his achievements since becoming commissioner. NHL Commissioner Gary Bettman also worked under Stern at the NBA, former NFL Commissioner Paul Tagliabue called him a great friend and ally on important issues, and many other executives in and out of sports have said they learned from the way Stern did business.

Stern stayed busy after leaving the league office, taking trips overseas on the NBA’s behalf, doing public speaking and consulting various companies. He was inducted to the Naismith Memorial Basketball Hall of Fame in 2014.

Stern and his wife had two sons, Andrew and Eric.