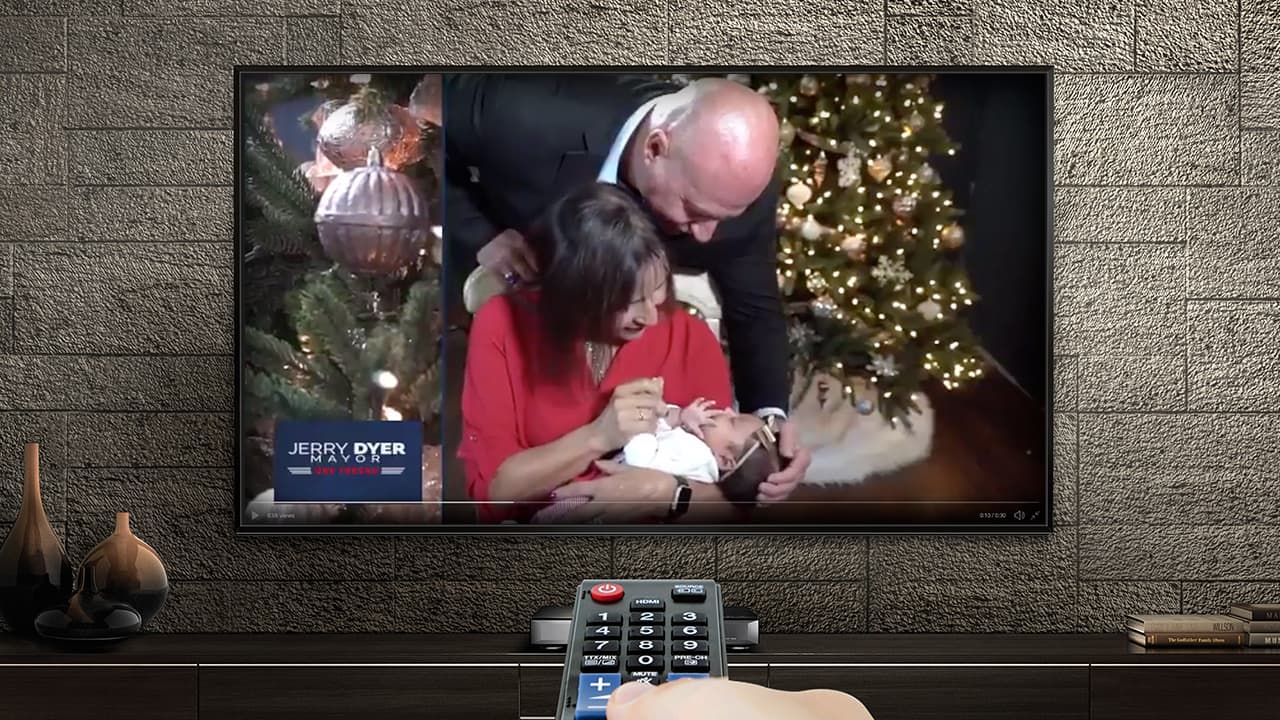 Have you seen Jerry Dyer’s granddaughter Charlotte? She is the star of Dyer’s $37,690 TV ad buy in his campaign for Fresno mayor.
Dyer’s holiday theme ad also features his wife, Diane.

“Charlotte reminds us what’s most important about the holiday season. Every one of us has a reason for the season,” Dyer says, as he and his wife coo over the newborn.
Dyer then transitions to a slightly political message.
“Let’s give the gift of a brighter future to our children and grandchildren,” he says.
Diane concludes with “Merry Christmas.”
Dyer has never been shy about talking about the importance of religion in his life.

This season, let’s give the gift of a brighter future for our children and grandchildren.

The Christmas/political spots are the first TV ads for Dyer. He’s already run radio messages on KMJ and posted billboards throughout the city (and Politics 101 even spotted one in Clovis).
Dyer’s ads can be seen on KSEE 24, CBS 47, and ABC 30, mostly during the news. This batch of 85 spots started Dec. 19 and will run through Jan. 3, according to Federal Communications Commission records.
And, if you miss him during the local news, Dyer will pop up one more time during NFL football. His spot during last Sunday night’s Chiefs-Bears game on KSEE cost $2,200 for the 30 seconds. It also appeared during the NFL on CBS coverage this past Sunday, as will again this coming Sunday. Those cost $1,500 each.
For comparison sake, the cost to air a 30-second political ad on the 5 p.m. local news: ABC 30, $800; CBS 47, $400; KSEE 24, $300.

Baby on the Way in the Janz House

According to campaign finance and FCC filings, the other top challenger in the mayor’s race — Fresno County prosecutor Andrew Janz — has not bought any media time.
But, he is keeping up with Dyer in the baby department.
He and his wife, Heather, are expecting their first child soon. Congratulations and good luck.

We are grateful to share many blessings with our friends and community! We wish you and your family well this season! #JanzForMayor pic.twitter.com/75U4vqk4Su

Speaking of congratulations, Terance Frazier popped the question to Fresno City Councilwoman Esmeralda Soria.
And, according to Frazier’s Facebook post, she said yes!
Frazier, a real estate developer, and Soria — who is running for Congress — have been dating for several years. Which meant, politically speaking, she had to recuse herself on any votes involving Frazier’s dealings with the city that came up for a council vote. And will have to going forward.
No wedding date has been set.

And, from Politics 101: Merry Hanukkah and Happy Christmas.

Gender Gap Opens Among Hispanics Who Could Be Key in 2020