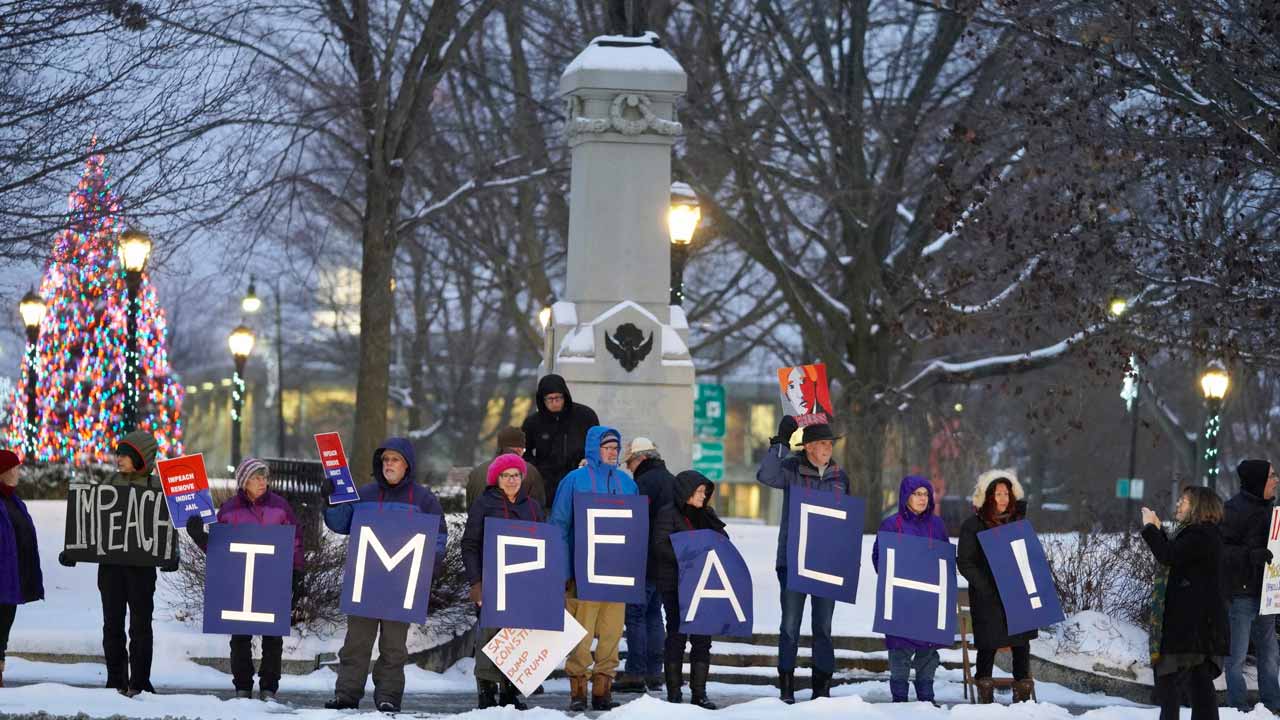 Listen to this article:
House Minority Leader Kevin McCarthy (Bakersfield) and fellow Republicans Tom McClintock (Roseville) and Devin Nunes (Tulare) opposed the president’s impeachment.
View the roll call of Count 1 (abuse of power) and Count 2 (obstruction of Congress).
Trump was impeached by the U.S. House of Representatives Wednesday night. He is only the third American chief executive to be formally charged under the Constitution’s ultimate remedy for high crimes and misdemeanors.

Cox, in an email, said voters sent him to Washington for issues like drug prices, water, and agriculture.
“They also sent me to Washington to defend the Constitution, because that’s what protects all of our rights and freedoms,” Cox wrote. “Here are the facts: Our president abused his power and used your taxpayer money to advance his own personal interest, and when Congress fulfilled its duty to investigate, the president acted as if he were above the law, obstructing the investigation by withholding witnesses and subpoenaed documents.
“Both of those actions violate our sacred Constitution, which only identifies one remedy for Congress to hold the president accountable. In obeying that solemn duty to my constituents and the Constitution, it is my responsibility to cast votes in favor of both articles of impeachment, for abuse of power and for obstruction of Congress.”
Harder simply tweeted, “Today I honored my oath to protect the constitution.”

McCarthy called the votes disgusting.
“Democrats just signed their own pink slips by voting to undo the results of the 2016 election and impeach the duly-elected President of the United States. Let’s not let them forget what they have done,” McCarthy said.
On the floor, Nunes accused Democrats of colluding with Russians for what he called the “phony” Steele dossier that was used to start the investigation into Trump leading to the Mueller Report.
“The only thing President Trump is guilty of is beating Hillary Clinton. The Democrats refuse to accept that loss, and now they’re indicating they’ll continue their impeachment efforts, even after this one fails in the U.S. Senate,” Nunes said. “The Democrats need a long period of rehabilitation.”

.@RepDevinNunes (@DevinNunes): “The only thing President Trump is guilty of is beating Hillary Clinton. The Democrats refuse to accept that loss… The Democrats need a long period of rehabilitation.”

The U.S. Senate will hold a trial on the impeachment charges and vote whether to remove Trump from office. A two-thirds supermajority is required, or 67 votes of the full 100-member Senate for the president’s removal.
If Trump is voted out of office, the Senate would hold a second vote to decide whether he is disqualified from running for future office.
Both California senators, Dianne Feinstein and Kamala Harris, are Democrats.

Now we know just how reckless is the Democrats’ chant of “Resist by ANY means necessary.” This is a stunning abuse of power and a shameless travesty of justice…https://t.co/HB08bknTRf pic.twitter.com/SWntXLuWmA

According to C-SPAN’s archive, neither Cox nor Harder made floor speeches.