A three-month investigation into the criminal activities of Bakersfield’s Country Boys Crips street gang has resulted in 35 arrests.

“Today’s operation was the latest example of our strategic and surgical approach towards impacting gang violence,” Bakersfield Police Chief Martin said in a news release. “By partnering with our local, state and federal law enforcement agencies we are able to better serve our community and carry out the true mission of law enforcement.” 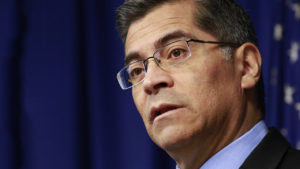 Thanks to a collaborative effort with the Bakersfield Police Department, we have taken down a dangerous gang that has terrorized the Bakersfield community.” — State AG Xavier Becerra

Operation Deep South targeted criminal activities by the Country Boy Crips, which claims parts of south Bakersfield as its territory. According to the website unitedgangs.com, the “gang’s traditional territory stretched from Cottonwood Road to Union Avenue, between East White Lane and East Belle Terrace.”

“Gang activity has proven to be the primary cause of our County’s elevated homicide rate,” Zimmer said. “Today’s operation strikes back by targeting gang crimes and using intelligence-driven policing to suppress and reduce violent crime.”

“At the California Department of Justice, protecting public safety in our neighborhoods and communities is our top priority. Thanks to a collaborative effort with the Bakersfield Police Department, we have taken down a dangerous gang that has terrorized the Bakersfield community,” Becerra said. “We will continue to work with our law enforcement partners to bring criminal street gangs to justice.”