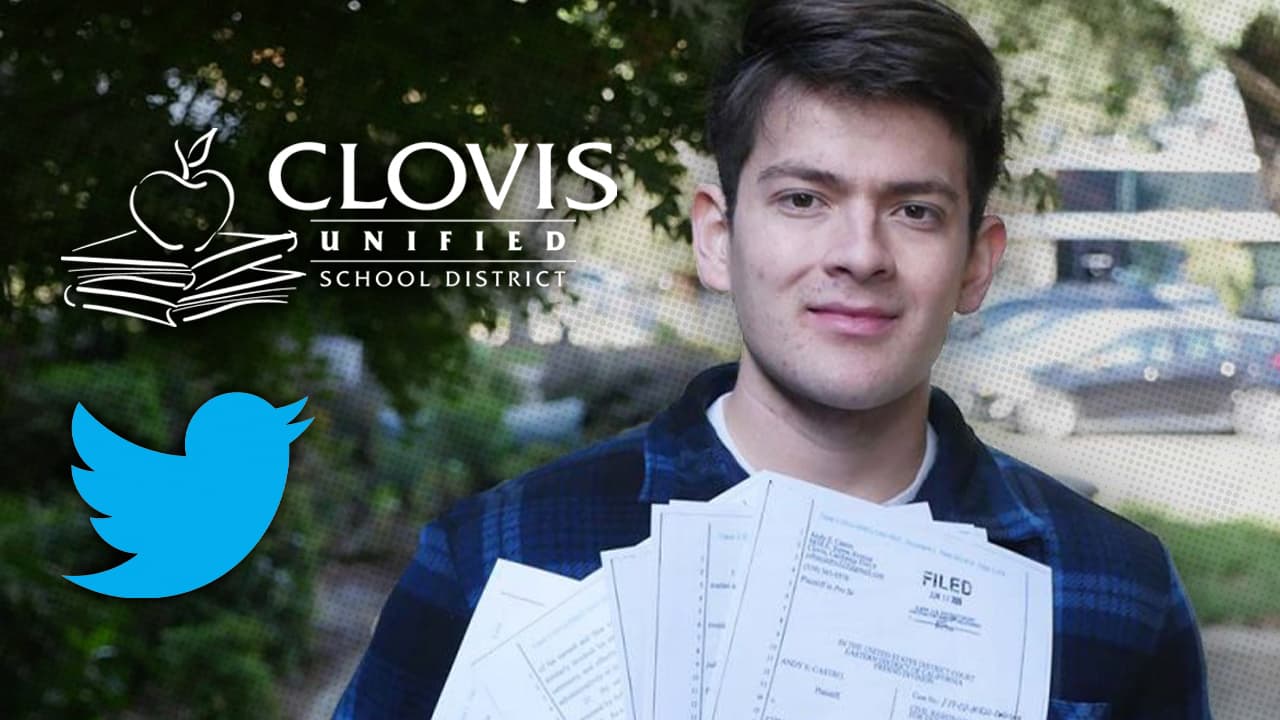 Andy Castro, who has engaged Clovis Unified in a First Amendment lawsuit, appears to have learned a valuable legal lesson: Listen to the judge.
Heeding the advice of federal judge Dale Drozd, Castro — a former Clovis High School student — hired professional counsel when filing his amended suit against the school district and administrators for an incident last May during graduation.

Castro, in his suit, alleged that the district violated his constitutional rights by not letting him participate in the graduation ceremony as punishment for using the N-word in a tweet. The revised suit states the punishment came only three hours before Castro was scheduled to walk, and he had no opportunity to defend himself.
Drozd dismissed parts of the original suit, mainly on technical grounds such as citing the wrong law or legal argument. He gave Castro a month to refile but advised him to hire a lawyer.
Castro did, employing the services of Fresno attorney John William Hastrup.
The new complaint cites the correct laws, particularly the alleged lack of due process as a violation of the 14th Amendment, not the Fifth, as originally stated. The narrative of Castro’s account remains largely unchanged.
Also, instead of asking for $10 million in damages, the revised complaint asks for an unspecified amount, as well as attorney fees.
Despite being denied the ceremonial aspect of graduation, Castro received his diploma and is attending Clovis Community College.
There is no date set for a hearing.

Congressman Devin Nunes held an event in Visalia last Friday, charging $5 a head for a discussion about the conspiracy against President Donald Trump. The event also featured author Lee Smith, discussing his new book “The Plot Against the President.”
The SJV Sun reported 1,200 were in attendance — a full house.
While some felt that Twitter trolls revealed the “secret” location at the Fox Theatre hours ahead of time, moderator and KMJ 580/105.9 host Ray Appleton spilled the beans a week before on the radio when he previewed the event with Nunes.
Trump tweeted about the event, reposting a video showing Nunes springing into action to prevent a Trump sign on stage from toppling over.

Last Thursday, the Fresno City Council adopted regulations for cannabis retail businesses, including a social equity component. The official vote was 4-3, but not without shenanigans. The debate was shorter than when the item first came to the council on Nov. 14.
During the brief discussion last week, council vice president Miguel Arias presided as president Paul Caprioglio stepped away from the dais. Arias immediately called for the vote, which he said passed without opposition. That took place without vociferous opponent Garry Bredefeld, who had also stepped away because he recused himself on a prior vote.
Bredefeld and Caprioglio were able to register “no” votes in time, as did Mike Karbassi.
Now, Mayor Lee Brand has 10 days  to veto the bill, as Bredefeld requested that he do.
Brand’s spokesman says the mayor has yet to decide.

As my colleague Nancy Price explored, State Center Community College District will choose its board leadership tonight. Under traditional circumstances, that would mean trustee Eric Payne would be elevated from vice president to president.
But, questions about his use of district funds, from car rentals to credit cards, may make that decision anything but automatic. Plus, Payne has yet to pay a $54,000 fine for campaign finance violations.
In response to my question on whether it would support Payne, the union representing teachers in the district sent this cryptic reply:
“We encourage the board to elect a member who has a record of supporting the faculty issues that ultimately impact our students. We look forward to working with the board president in the coming year,” said Nelson Esparza, chairman of the State Center Federation of Teachers PAC.
Esparza spoke in his union capacity. In addition to being an instructor, he is also a Fresno city councilman and previously served as a trustee for the Fresno County Office of Education.
Michael Evans, chairman of the Fresno County Democratic Party, offered no official statement. Payne is a Democrat.


Related Story: Will State Center Board Promote or Pass Over Trustee Payne?

Payne, meanwhile, is concerned that the Trump administration may roll back a law designed to encourage banks to invest in low-income communities.
Payne, and the California Reinvestment Coalition, oppose changes to the Community Reinvestment Act. The group says that altering the “one-ratio approach” — described as a way that federal regulators look at banks based on their volume of lending and investments compared to deposits — will lead to less lending to communities in need.
“The one-ratio change and encouragement for banks to invest more broadly will drastically curtail reinvestments for Fresno and other rural counties across California where banks already have, but are failing, their reinvestment obligations,” Payne said in a news release.

Teresi Gets a Partner

Philip Teresi has a co-pilot for his appropriately named “Drive Time” radio show on KMJ (580/105.9). Skip Echeverria joined Teresi on Monday for the 2-6 p.m. radio program.
Echeverria, better known as “Skippy,” for the last nine years has been the host of “The Morning After” on New Rock 104.1.
Her given first name is Frances, which she mentioned on her first show with Teresi.
Perhaps fitting for a radio jock in this day and age, Echeverria also has another gig, as a licensed marriage and family therapist.
As someone who worked in radio for 13 years, I know that therapy is practically a job requirement.