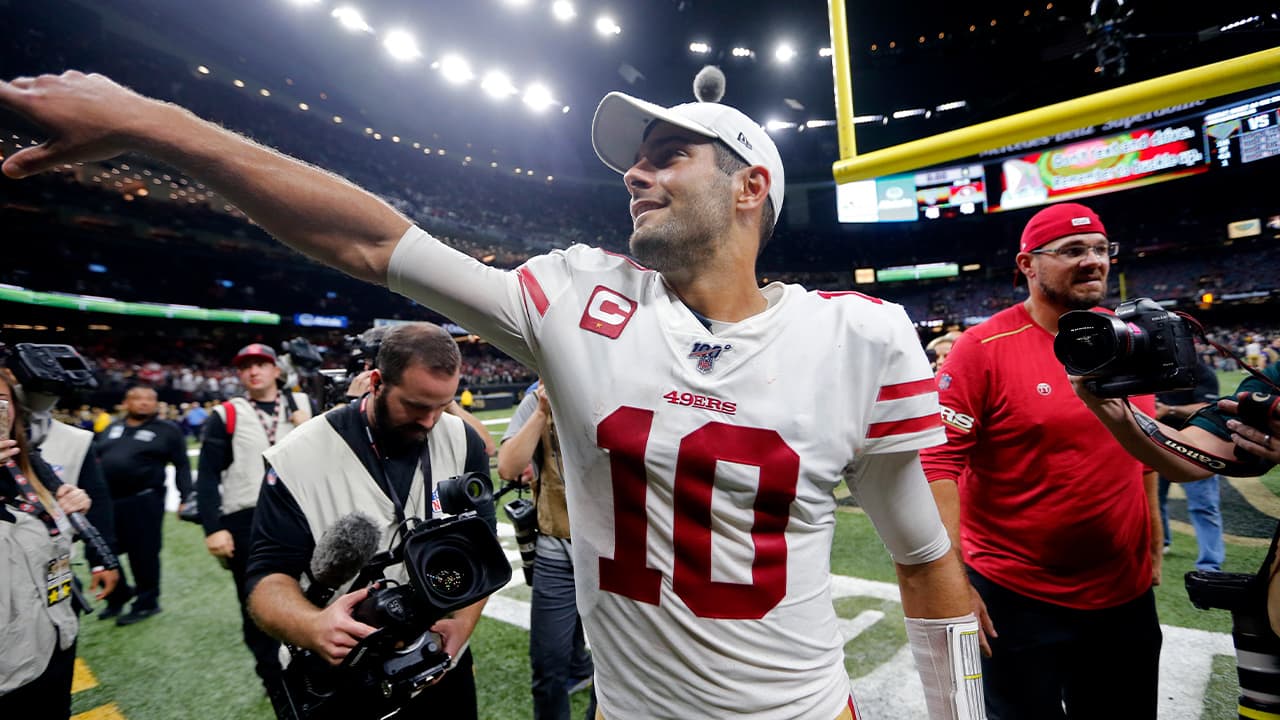 Jimmy G. seems to be heating up just as Tom Terrific appears to be slowing down. And it capped a tremendous all-around game, maybe the season’s most captivating, between a couple of top teams. San Francisco is 11-2, its best start in 22 years; New Orleans is 10-3 and already has clinched the NFC South title.

The 42-year-old Brady’s latest sub-par outing (19 of 36 for a paltry 169 yards, one TD, one INT, one heavily wrapped right arm postgame) and New England’s latest lame showing by its offense contributed to a second consecutive loss, this one by 23-16 to the Kansas City Chiefs, who became the first visiting team to win in Foxborough since October 2017 and secured the AFC West title. Also contributing: some abysmal officiating by Jerome Boger’s crew. There were three egregious calls in the second half that went against Bill Belichick and Co.: a play blown dead, because of the “down by contact” rule, when Stephon Gilmore was returning KC tight end Travis Kelce’s fumble (it was ruled a turnover on review); a TD by N’Keal Harry wiped out with a phantom out-of-bounds decision at the 3 (TV replays showed he clearly stayed in, but Belichick was out of challenges by then); a defensive pass interference ignored even though Kendall Fuller was all over receiver Phillip Dorsett. “I was 99 percent confident that I was interfered with,” Dorsett said, “but there wasn’t a call.” New England Patriots quarterback Tom Brady wears a wrap on his right elbow as he arrives to speak to the media following an NFL football game against the Kansas City Chiefs, Sunday, Dec. 8, 2019, in Foxborough, Mass. (AP Photo/Charles Krupa)

NFL players’ misgivings about the medical care they receive is nothing new — in a survey of 100 players, released by the AP in 2016, fewer than half thought clubs, coaches and team doctors had the athletes’ best interests at heart — but those worries have been aired publicly with increasing frequently of late. Another example came Sunday, when Cleveland Browns quarterback Baker Mayfield opined to reporters that an injury to teammate Odell Beckham Jr. “wasn’t handled the right way in our training room” and “could have been addressed earlier on.” Later, Mayfield tried to backtrack on social media.

Somehow, without the injured Ben Roethlisberger, JuJu Smith-Schuster or James Conner — not to mention former superstars Antonio Brown and Le’Veon Bell — and with a third-string, undrafted rookie QB who goes by the nickname Duck, coach Mike Tomlin has the Pittsburgh Steelers at 8-5 and with a real shot at a playoff berth. Quarterback Devlin “Duck” Hodges improved to 3-0 as a starter, thanks in large part to a defense that is dominant, with a 23-17 win at Arizona. No one has more takeaways than Pittsburgh’s 33, a total boosted Sunday by two interceptions by Joe Haden and one by T.J. Watt.