Titans, Raiders Headed Into Opposite Directions 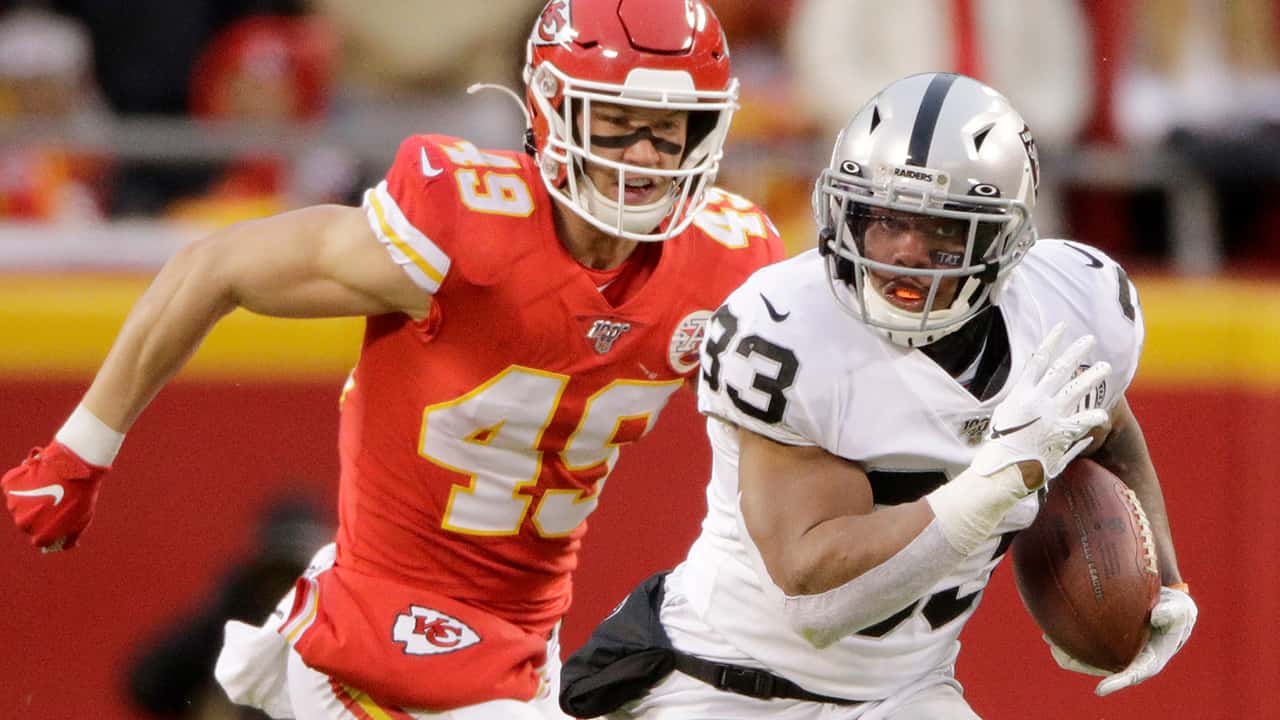 OAKLAND — The Tennessee Titans and Oakland Raiders are moving in opposite directions heading into a stretch run.
The Titans (7-5) have won five of six games since switching to Ryan Tannehill at quarterback, turning a mediocre season into a promising one headed into Sunday’s game against the struggling Oakland Raiders (6-6), who are one game behind Tennessee in the race for the final wild-card spot.

Both teams rely heavily on the running game led by a pair of backs who played college ball at Alabama. Tennessee’s Derrick Henry leads the NFL with 1,725 yards rushing over his past 16 games. He has 11 TD runs this season and leads all running backs with 31 runs of at least 10 yards. His counterpart in Oakland and successor at Alabama, Josh Jacobs, has been almost as effective his rookie season, ranking fourth in the NFL with 1,061 yards rushing so far.
“He’s been doing that all these years I’ve been playing with him at ‘Bama,” said Titans linebacker Rashaan Evans, a teammate of Jacobs’ at Alabama in 2016-17. “It’s going to be like another reunion and have a guy I been practicing against for three years and being able to now play against him is going to be definitely fun.”

The Raiders’ once efficient offense has stalled of late. Starting with a victory in Indianapolis in Week 4 and continuing through a home win against the Chargers in Week 10, the Raiders led the NFL in yards per play (6.34) and ranked sixth in points per drive (2.35). Over the past three weeks, the Raiders rank 18th in the league in yards per play (5.14) and last in points per drive (0.85).

The Titans started the season holding their first seven opponents to 20 points or less. Now they’ve gotten back on track the past two weeks, making nine games this season that Tennessee has held a team to 20 points or below. The Titans rank seventh in the NFL in scoring defense, giving up 19.5 points a game.

After back-to-back road games in cold weather, the Raiders will be happy to come home for the final scheduled homestand at the Coliseum. The Raiders previously endured a seven-week stretch away from Oakland and will finish the season with road games against the Chargers and Broncos following next week’s home finale against Jacksonville. The Raiders are set to move to Las Vegas next season.
“We do like playing at home like everybody else,” Gruden said. “We’ve been on the road more than anybody in the history of the world now. You know 45,000 miles of travel is a joke, and it’s taken a toll on our team. I believe that. But it’s good to be home, sleep in your own bed, play a home game, especially with the kind of fans that we have.”
Gruden did exaggerate slightly as the Raiders are traveling about 32,000 miles this season, most in the NFL.

The Titans have been leaning more and more on Henry since Tannehill took over as the starting quarterback. Even though the Titans aren’t asking Tannehill to throw much, he’s been very effective. Tannehill is second in the NFL with a 113.9 passer rating, second to Drew Brees completing 72.7 percent of his passes, and he’s leading the NFL averaging 9.1 yards per pass attempt.
Since Tannehill moved into the lineup, the Titans are scoring 29.7 points a game, second in the NFL behind only the Ravens (37) in that span.
“For him to come off the bench, that’s a real hard thing to do — and earn the trust and respect of his whole team,” Gruden said. “He’s been money at crunch time.”