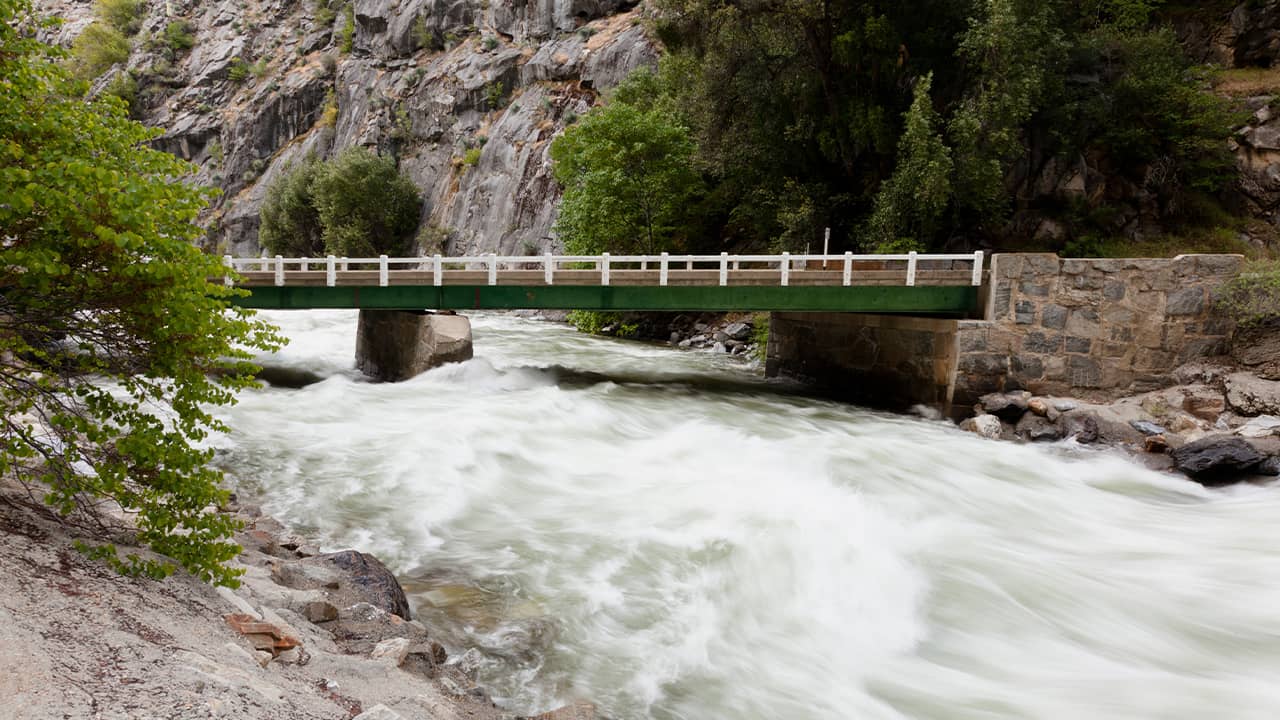 Just as they did more than two generations ago, Kern County farmers are looking to another Central Valley river to the north to refill their groundwater shortfall.
But this time around, natives in the Kings River watershed are “sharpening their knives” to fight off what they say is a desperate water grab.

The sprawling Semitropic Water Storage District, in the northwest corner of Kern County, has filed an application with the State Water Resources Control Board claiming the Kings River Water Association has forfeited two of its floodwater licenses by not using that water.
It has applied for 1.6 million acre-feet of water from the Kings River, about a year’s supply for million and a half homes.

To some, the action is unsettlingly familiar to what happened on the San Joaquin River more than 80 years ago.
Farmers on the east side of the San Joaquin Valley petitioned the federal government to build Friant Dam and the Friant-Kern Canal in order to take most of the San Joaquin River’s water south to replenish groundwater.
“Here we are again, talking about potentially exporting our river water to the south,” said Mike Carbajal, Fresno’s director of public utilities in an interview earlier this month.
Fresno, which has spent millions to increase its capacity to treat river and canal water for customers in order to wean itself off groundwater, strongly opposes Semitropic’s application for Kings River water.
The river is very much needed in its home watershed, Carbajal said.
“We’re already talking about having to fallow significant amounts of farmland here and Fresno must plan for its own growth,” he said. “Losing Kings River water would have a detrimental effect on the local economy.” Mackenzie Faulkner and her children Mathias and Marley Torres, wade in the Kings River in October 2018. (sjvwater.org/Lois Henry)

‘The Art of What Can be Done’

“No, no. This isn’t a water grab,” insisted Jason Gianquinto, Semitropic’s general manager.
This project would only involve Kings River floodwater — water that is currently wasted by being shunted north to the Sacramento-San Joaquin Delta and out to the ocean, he said.


To some, the action is unsettlingly familiar to what happened on the San Joaquin River more than 80 years ago.
“I don’t think anyone can say there isn’t Kings River floodwater that’s not leaving the basin,” Gianquinto said.
Semitropic would move that water into the California Aqueduct and send it about 70 miles south into Kern County. The new supply would ease Semitropic’s 125,000-220,000-annual-acre-foot groundwater overdraft.
“We understand that everyone is very parochial about their water rights,” Gianquinto said. “But at the end of the day, it’s about the art of what can be done.”
But should it be done, asked Gary Serrato, former general manager of the Fresno Irrigation District and currently executive director of the North Kings Groundwater Sustainability Agency (GSA).

You can read more of Lois Henry’s reporting on Valley water issues at sjvwater.org.

Serrato said that, yes, when the Kings River has a huge year, floodwater escapes the valley, as it did last year. But he and other Semitropic opponents noted the amount is dropping as water districts, cities and rural communities create more flood capture projects designed to recharge their groundwater basins.
The Kings River Water Association (which includes the Fresno, Alta and Consolidated districts) is home to more than 600,000 residents of “disadvantaged communities,” defined as having a median household income of 80 percent lower than the state average.
Under the state’s new Sustainable Groundwater Management Act (SGMA), local GSAs must find ways to keep the water table at levels that don’t harm the availability and quality of water for those communities.
“What’s Semitropic going to do with that water?” Serrato wanted to know. “Give it to a few big farmers?”
Or, perhaps sell it to southern California.
“We did not preclude that option,” Gianquinto acknowledged. “But the driver is to keep it here for farming.”
“Well,” Serrato said. “That tells you everything you need to know.”

Use It or Lose It

Semitropic’s idea to move Kings River flood water south isn’t new.
It was actually conceived decades ago by Kings River water interests as a way to keep flood waters from returning to their natural home, the old Tulare Lake bottom, now intensively farmed by J.G. Boswell.
The concept was similar: Divert floodwater into the California Aqueduct and hold it in Kern County for farming or eventual sales.
The project never came to fruition. Instead, Kings River floodwater has been routed north into the San Joaquin River channel and on to the delta.
So, an argument can be made to the state water board that the Kings River Water Association has, indeed, violated one of the first rules of California water rights: “Use it or lose it.”
But that same state board is also tasked under California’s new groundwater law with ensuring GSAs are adequately addressing groundwater shortfalls and protecting disadvantaged communities.
The fate of Kings River floodwater could depend on which lens board members view the case through.
“This is a huge issue for the State Water Board,” said Kings River Watermaster Steve Haugen. “It will be precedent-setting for all the other rivers in the state. Prior to SGMA, this would look different. Post-SGMA opens this case to an entirely different set of paradigms to evaluate this with.”
The state water board closed the public comment period on the applications late last spring and is now “processing the filings,” according to Ailene Voison, a spokesperson with the water board. Water rights cases can take years to process.

‘Pirates at the Door’

Both sides believe the other is on weak ground.
In particular, the Kings water association points to the original 1967 State Water Board decision granting it the licenses that Semitropic wants, as having foreseen this floodwater issue.
That decision notes that the association will strive to use all Kings River flows in the basin but acknowledges there are some “extreme flood years” when that won’t be possible, according to Watermaster Haugen.
KRWA members have been slowly implementing more projects to use the flood water to replenish groundwater, said Phil Desatoff, general manager of Consolidated Irrigation District, one of 28 member districts of the KRWA.
With the advent of SGMA, which mandates overdrafted basins be in balance by 2040 and has provided millions in state grant funding, those efforts have ramped way up, Desatoff said.
“We were already working to capture that flood water, then along comes SGMA. So, we’re working even harder to use all that water and, then, BOOM, now we’ve got pirates at the door trying to steal our water,” Desatoff said in reference to Semitropic.
The two sides had been trying to negotiate an amicable deal for the floodwaters since Semitropic’s plans were first revealed in a 2015 article in The Bakersfield Californian.
After two years of haggling, however, negotiations broke down.
“They basically said there was no water for our project,” Gianquinto said.
That’s when Fresno, Alta and Consolidated irrigation districts filed a preemptive action with the state water board seeking to block Semitropic’s plans.
The May 2017 filing said there is no excess water on the Kings River but if the board decides there is, it should be given to the irrigation districts. The petition also seeks to expand the allowable place the water may be used to include all of Fresno, Kings and Tulare counties. A semi-truck crosses over the Kings River on Highway 99 in October 2019. (sjvwater.org/Lois Henry)

Both sides are gearing up for battle.
“If it takes 50 years, my board is prepared to tie it up for 50 years,” Desatoff said. “We are sharpening our knives.”
Meanwhile, Gianquinto said Semitropic has reduced the size and nature of its project. It originally envisioned taking up to 2,200 CFS (cubic feet per second) of flood water off the south fork of the Kings River. The district planned to store it in a large reservoir near the western Kings County community of Kettleman City before moving it slowly down the Aqueduct to Kern County.
It has since downsized to 1,200 CFS with a small water pond just for water management. Gianquinto said the new environmental impact report on the smaller project should be out in April.
He noted that, at 1,200 CFS, the project wouldn’t come anywhere near taking all the Kings River flood flows, which he said were between 4,000 and 6,000 CFS. Kings River Watermaster Haugen countered that the average flood flows are about 2,450 CFS.
Either way, Desatoff, Serrato, and Haugen said even that amount will drop as Kings River interests continue building recharge projects and working with NASA on the Airborne Snow Observatory to better gauge snowpack in order to reduce flood releases from Pine Flat Dam.
There just isn’t any excess Kings River water for Kern, they said.

Amanda Monaco, an advocate for residents of low-income communities hard hit by dropping groundwater levels, agreed.
“(Kings floodwater) definitely shouldn’t go to Kern County for someone to profit off of,” she said.
Monaco has been working with residents of disadvantaged communities to help them engage with GSAs and develop plans that protect their water. She is the water policy coordinator for the Leadership Counsel for Justice and Accountability.
“The overwhelming majority of people we work with are on groundwater, whether from an individual domestic well or a small system,” she said.
Thousands of those wells went dry in the last drought, leaving whole communities without. More projects to capture and recharge Kings floodwater “would benefit the people in this watershed,” Monaco said.
“Sorry, Kern. If you’re farming that much in an area without water, maybe you should think about that.” About the Author
Lois Henry is the CEO and editor of SJV Water. She has 30 years’ experience covering water and other issues in the San Joaquin Valley. Henry lives with her husband, five dogs, one orange cat, and a cranky rescue mustang horse in Bakersfield.
Related Topics:Californiadisadvantaged communitiesfarmersflood waterGary SerratoKern CountyKings RiverSemitropic Water Storage DistrictSGMAwater grab
Up Next