Editor’s note: U.S. Secretary of State Mike Pompeo on Nov. 18 said that Israel’s settlements in the West Bank do not violate international law. That pleased Israeli Jews who see the territory as rightfully theirs and infuriated the Palestinians who live there and claim it as their land.

Here, a professor of Israel studies and the author of a new primer on the Israeli-Palestinian conflict explains the history of the West Bank settlements – and why they’re so controversial.

1. Why Is Ownership of the West Bank so Contested?

In May 1967, not a single Israeli lived in the West Bank, a hilly region about the size of Delaware. It was home to roughly a million Palestinians, who had been living under contested Jordanian control for two decades.

Israel conquered the West Bank during the Six-Day War in June 1967. Soon afterward, Israeli civilians began moving to the region, initially to areas like Kfar Etzion that had been home to Jewish communities before Israel’s founding in 1948.

In 1968, a rabbi named Moshe Levinger and a small group of followers who embraced a messianic version of religious Zionism moved into the ancient city of Hebron, in the heartland of the West Bank. Hebron is a holy city for Jews because it is believed to be the burial place of the Jewish patriarchs and matriarchs Abraham, Isaac, Jacob, Sarah, Rebecca and Leah.

The population of Israelis living in the West Bank has mushroomed over the years. An estimated 430,000 Israeli Jews now live in 132 officially recognized “settlements” and in 121 unofficial “outposts” that require, but haven’t yet received, government approval. Constituting about 15% of the West Bank’s total population, these “settlers” live in their own communities, separate from the area’s approximately 3 million Palestinian residents. 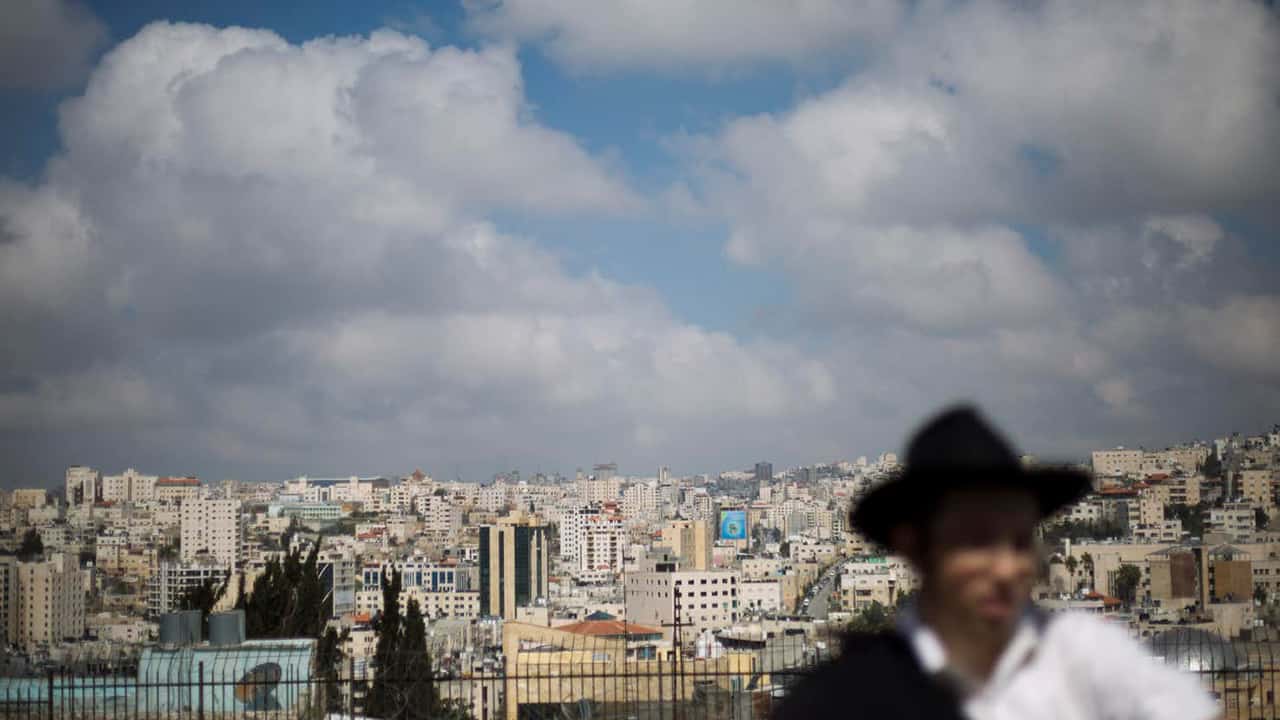 The West Bank city of Hebron was one of the first places Israeli settlers moved after Israel won the West Bank from Lebanon in the 1967 war. (AP Photo/Ariel Schalit)

2. Why Do Palestinians Object to the Israeli Settler Movement?

Though they are neighbors and sometimes co-workers, relations between Jews and Palestinians on the West Bank are seldom friendly. West Bank Palestinians, who are majority Muslim, see themselves as the area’s indigenous inhabitants; many of their ancestors have lived and farmed in the West Bank for many centuries.

Palestinians contend that Israeli settlements in the West Bank are built on stolen land and that the settlers’ use of water – a scarce resource – is likewise illegal.

Palestinians contend that Israeli settlements in the West Bank are built on stolen land and that the settlers’ use of water – a scarce resource – is likewise illegal.

Palestinians frequently experience harassment from extremist Israeli settlers, sometimes as Israeli soldiers look on. There are hundreds of reports of extremist settlers, many of them armed, violently attacking Palestinians, burning their fields and uprooting their olive trees.

Additionally, Israel has appropriated West Bank land to build a network of roads connecting settlements to Israel and to each other. These roads are generally off-limits to Palestinian drivers, hampering their freedom of movement and making travel within the West Bank more difficult and time-consuming.

The Israeli army security checkpoints that dot the West Bank, which are meant to protect Israelis from terror attacks, also restrict and complicate the ability of Palestinian people to move around. 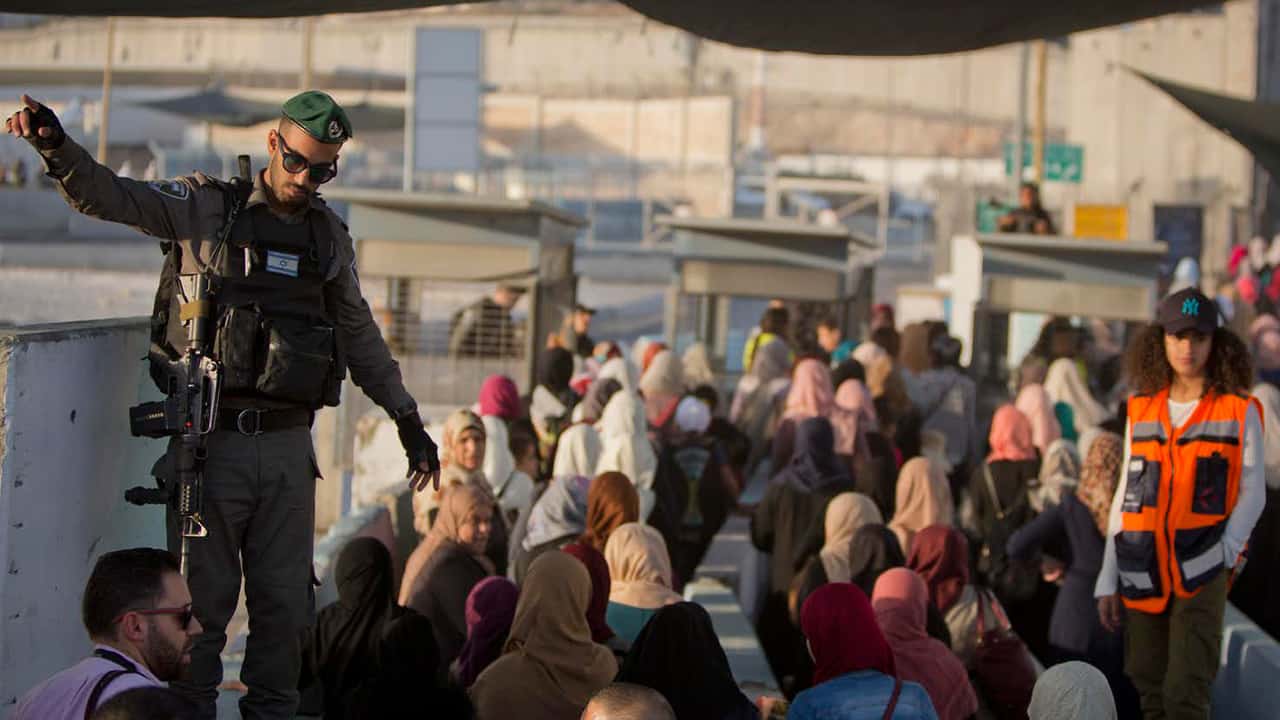 Palestinians on their way to Friday prayers during Ramadan pass an Israeli checkpoint between the West Bank city of Ramallah and Jerusalem, June 8, 2018. (AP Photo/Majdi Mohammed)

3. Why Do Israelis Want to Live in the West Bank?

Israelis choose to live in the West Bank for many reasons.

The popular stereotype of Jewish settlers as religious fanatics determined to reclaim the entire ancient homeland they believe was given to Jews by God is not quite accurate. It’s estimated that only about a quarter of West Bank settlers live there out of ideological conviction.

Still, these fervent settlers are a vocal and highly visible minority. They generally live in smaller settlements, located deep inside the West Bank.

They see their presence as a means of ensuring permanent Jewish control over the area, which they call by the biblical names “Judea and Samaria.” These settlers believe that by living in the West Bank they are serving God’s will and helping to bring about the long-awaited coming of the Messiah.

Most Jewish settlers in the West Bank, however, live there for economic reasons. Israeli government investment and incentives aimed at encouraging Jews to settle there make the cost of living lower than inside Israel.

Many Jews in the West Bank are secular, particularly those who emigrated from the former Soviet Union since the early 1990s.

Others, like the growing number of ultra-Orthodox Jews living in the West Bank, may believe that God gave the West Bank to Israel — but they move there primarily because they can find affordable housing and a better quality of life.

4. Are Israel’s West Bank Settlements Legal or Not?

Most legal experts and the United Nations agree that Israeli settlements in the West Bank violate international law.

The 1949 Geneva Convention, which Israel signed, prohibits an occupying state from moving its own civilians into the territory it occupies. According to the International Court of Justice, the UN’s main judicial body, the West Bank is considered occupied territory because it was not part of Israel before the Israeli army conquered it in 1967. Territorial conquest is also forbidden by international law.

The Israeli government says that the Geneva Convention is not applicable to the West Bank because it only refers to a state occupying another state’s land. Israel considers the West Bank “disputed territory,” not occupied territory.

Further, Israel’s government has argued, even if the Geneva Convention did apply, it would only prohibit forcible population transfers, like the mass deportations carried out by Nazi Germany – not the voluntarily movement of people into occupied territories.