Despite near-record high temperatures over the past few days, Fresno could be in for its first rainfall of the season by midweek. Meantime, mountain communities are bracing for the possibility of heavy snow.

The National Weather Service is predicting an increasing chance of rain from Tuesday night through Wednesday afternoon.

An area of low pressure aloft will be in the vicinity of Southern California Wednesday into Thursday. This atmospheric disturbance will likely be responsible for the first precipitation event of the late starting 2019-2020 wet season. #CAwx pic.twitter.com/XZHET2V2bT

Oct. 1 Was Start of Rain Season

Fresno has received no precipitation so far in the current rain season, which began Oct. 1. Last year, the city recorded a tenth of an inch by Nov. 17. The normal rainfall total for this time of the year is 1.21 inches, according to NWS records.

The rainfall prediction comes as the Valley is experiencing a heatwave, of sorts. High temperatures on Sunday were about 10 degrees above normal for this time of year across Central California, forecasters said.  On Monday afternoon, Fresno experienced a high of 77 degrees. That’s just 3 notches lower than the record high of 80 degrees for the day set in 2008. 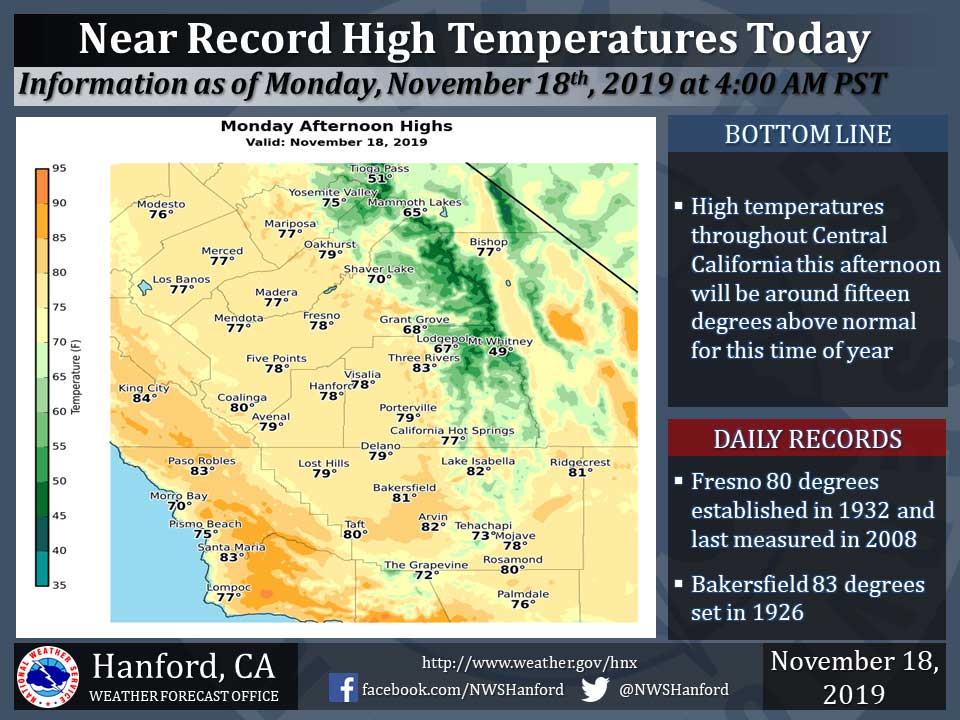 Up to a Foot of Snow Possible at Upper Elevation

At upper elevations, a winter storm watch is in effect from late Tuesday night through Thursday afternoon. Forecasters say as much as 9 inches of snow could fall in areas above 6,000 feet, including in Yosemite and Sequoia and Kings Canyon National Parks. A foot or more of snow could fall at levels above 9,000 feet.

The Tehachapi mountains could see snowfall as low as 5,000 feet.

The NWS says those planning to travel into higher elevations this week should be prepared for winter driving conditions. The Yosemite park website urges drivers to carry chains at all times, even for vehicles with four-wheel drive. “Chains may become mandatory at any time,” the website states.

Should rain and snow materialize this week, weather watchers who enjoy tracking storms as they move through the area will have one less tool at their disposal. The Hanford NWS office, which provides radar data and animations, announced on Twitter that their radar dome is undergoing maintenance this week and is temporarily out of service.

The NWS Hanford radar will get a cleaning and fresh paint this week. A crew is here to clean the dome today and will paint Tuesday. The radar will be out of service during this time. #cawx pic.twitter.com/GoQHw7wmU5