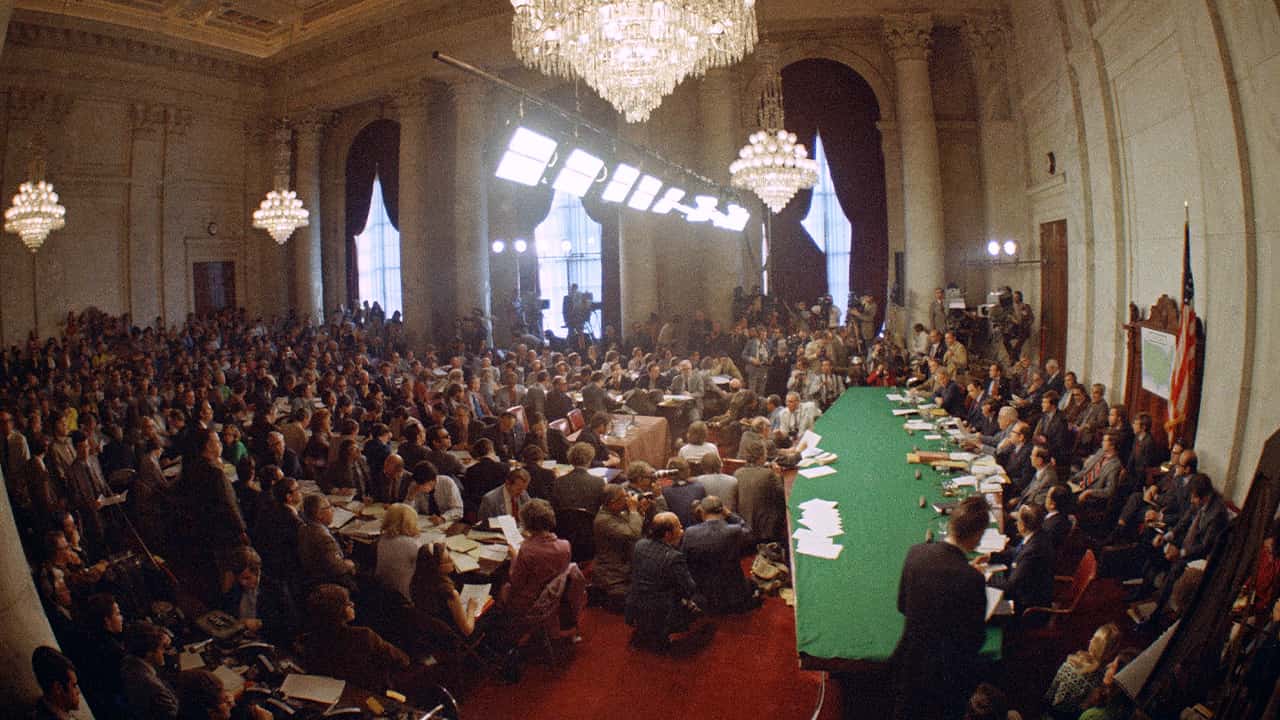 Back in 1973, tens of millions of Americans tuned in to what Variety called “the hottest daytime soap opera” — the Senate Watergate hearings that eventually led to President Richard Nixon’s resignation.
It was a communal experience, and by some estimates, more than 80% of Americans tuned in to at least part of the Watergate telecasts. They were offered by ABC, CBS and NBC, as well as PBS, which won acclaim and viewers by showing not only the live hearings but also the full-length replays in prime time.
Seeing the witnesses lay out the case against the president moved public opinion decidedly in favor of impeachment.
But this time may be different.
When the House impeachment inquiry of President Donald Trump begins its public phase on Wednesday, people will be watching on screens large and small. Many, in fact, are likely to be watching the proceedings on more than one screen, with real-time reinforcement of their preexisting views of Trump on social media platforms and other venues that did not exist in Nixon’s time.
In the Watergate era, there was no Fox News or nationally prominent conservative talk radio shows, which today are favored by many of Trump’s supporters. Nor was there the equivalent of MSNBC, which caters to left-of-center partisans.
“People now have a far greater variety of options as to how to consume this,” said professor Tobe Berkovitz, a former political media consultant who teaches communications at Boston University.

“Everyone might watch the same hearing, but then people are going to divide into camps in terms of how they want to engage with the analysis,” he said. “You’re going to pick who you want to interpret and propagandize.”


“Everyone might watch the same hearing, but then people are going to divide into camps in terms of how they want to engage with the analysis. You’re going to pick who you want to interpret and propagandize.” — Professor Tobe Berkovitz, a former political media consultant who teaches communications at Boston University
Two decades before Watergate, Americans had their first collective immersion in live telecasts of a high-stakes Washington hearing when Sen. Joseph McCarthy, R-Wis., polarized the country with his relentless pursuit of suspected communist sympathizers. Joseph Welch, a lawyer representing the Army, is remembered to this day for his question to McCarthy in 1954: “Have you no sense of decency, sir?”
The Watergate hearings produced a comparably memorable catchphrase, when Sen. Howard Baker, R-Tenn., summarized the gist of the complex inquiry into a politically motivated break-in: “What did the president know and when did he know it?” A damning answer eventually surfaced after the Select Committee on Presidential Campaign Activities, as the Senate’s Watergate Committee was officially called, obtained secret Oval Office tapes that implicated Nixon in a cover-up.
In the runup to President Bill Clinton’s impeachment by the House in December 1998 and acquittal by the Senate two months later, there was a similar dramatic twist when disclosure of Monica Lewinsky’s semen-stained blue dress undercut Clinton’s claim that he had never had sex with her.
Kathleen Hall Jamieson, director of the University of Pennsylvania’s Annenberg Public Policy Center, said Americans expecting an equally dramatic moment in the upcoming impeachment telecasts may be let down, given that so much important testimony already has been presented in closed-door sessions. Will the Upcoming Impeachment Telecasts Change Many Minds?

“If you’re expecting revelation as opposed to confirmation, you’re going to be disappointed,” Jamieson said. “It’s going to seem anticlimactic unless something new is discovered.”


“If you’re expecting revelation as opposed to confirmation, you’re going to be disappointed. It’s going to seem anticlimactic unless something new is discovered.” — Kathleen Hall Jamieson, director of the University of Pennsylvania’s Annenberg Public Policy Center
She noted another contrast between Watergate and the Trump inquiry. Nixon and his top aides struggled to communicate persuasively with the public as the investigation unfolded, whereas Trump and his advisers are making intensive use of advertising and social media “to make sure his base stays locked down.”
Will the upcoming impeachment telecasts change many minds?
Mark Meckler, an early leader in the tea party movement, predicts a lot of Americans won’t even watch the broadcasts because they’ve already reached conclusions.
Many Trump supporters won’t tune in “because they think it’s a sham process,” he said. “And I don’t think most people on the left will watch because they already know the conclusion in their minds. To them, the president has been impeachable since before he was elected.”
But Darrell West, a longtime political science professor who is now vice president of the Brookings Institution, said the telecasts will boost public interest.
“They will put human faces on the closed-door testimony,” he said in an email. “Viewers will be able to observe what people say and how they say it as well as the manner in which they answer questions.”

PBS Not Planning a Repeat of Prime-Time Impeachment Replays

West acknowledged that most people have made up their minds on Trump’s guilt or innocence.
“But the testimony doesn’t have to shift very many people to be politically influential,” he wrote. “If only 10% are affected negatively by the testimony, Trump’s removal number jumps from 50 to 60%. That would represent an enormous hit for him and could lead some Republican Senators to consider a vote to remove the President.”
Arthur Sanders, a professor of politics at Drake University in Des Moines, Iowa, recalled that public support for Nixon’s impeachment grew as the televised Watergate inquiry progressed, while most Americans remained opposed to Clinton’s ouster at every stage of his impeachment process.
“The Democrats hope this follows the Nixon model — Trump has always hoped it follows the Clinton model,” Sanders said.
Regardless of how the TV audience shapes up, Sanders knows of some Americans eager to follow the Trump impeachment drama.
“What’s going on now is horrible for the country, but it’s the best time to teach classes on American politics,” he said. “The students are so curious, trying to figure out what’s going on — what’s normal in American politics and what isn’t.”
As for PBS, it’s not planning a repeat of prime-time impeachment replays but says the daytime telecasts will be available on demand via all of PBS’ digital platforms.

US Held Record Number of Migrant Children in Custody in 2019