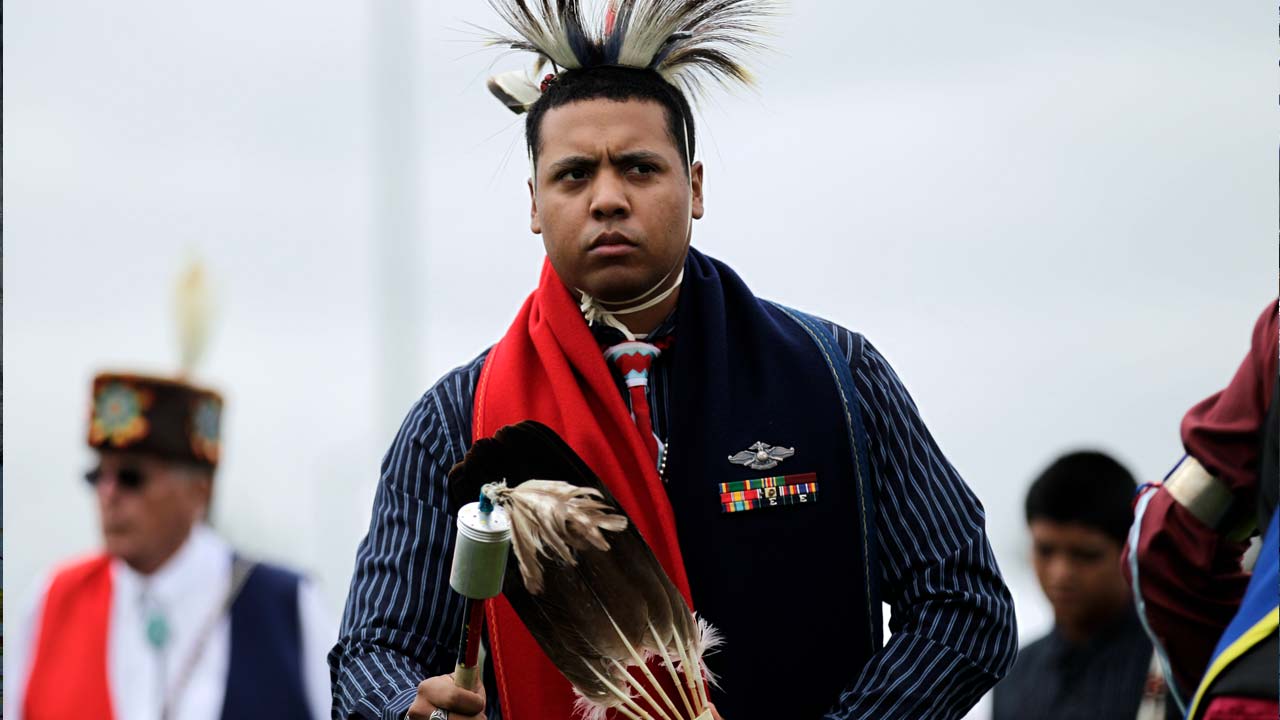 Before Chuck Boers joined the U.S. Army, the Lipan Apache member was given his family’s eagle feathers. The feathers had been carried by his great-great-great-grandfather on his rifle when he was an Apache scout.

They also were carried by relatives who fought in World War I, World War II, Korea and Vietnam. In 2004, Boers had the feathers with him during the Battle of Fallujah in Iraq. “I felt like I had my family with me to protect me,” he said.
“The Warrior Tradition,” a new film airing on ValleyPBS tonight examines the complex history of Native Americans in the U.S. military since World War I and how their service transformed the lives for Native Americans from various tribes. Through interviews with veterans and using archival footage, the documentary probes the complicated relationship Native Americans had with military service and how they used it to press for civil rights.
The documentary exhibits the mixed feelings some Native Americans felt toward the U.S. military and how tribal members embraced those who served as “warriors.” In this 2012, file photo, Blas Preciado, left, a Vietnam War veteran of the Kiowa tribe, talks with Marine Cpl. Frank Tartsah, right, also of the Kiowa tribe, during a Native American blessing for veteran and active-duty servicemen at Camp Pendleton. “The Warrior Tradition,” will air on ValleyPBS (Ch. 18) Monday night (Nov. 11) at 10 p.m. It examines the history of Native Americans in the U.S. military since World War I. (AP Photo/Gregory Bull, File)

Native Americans Joined the U.S. Military to Honor Their ‘End of the Treaty’

“From just about the beginning of the United States itself, the government has fought various wars against Native nations. And that’s the irony,” Patty Loew, director of the Center for Native American and Indigenous Research at Northwestern University, said in the film.
But Native Americans, from tribes in Oklahoma to nations in Washington, joined the U.S. military to honor their “end of the treaty” that the U.S. government previously broke, Loew said.
At the onset of World War I, the first generation of Native Americans after the so-called Indian Wars began joining the U.S. Army even though they weren’t considered citizens or allowed to vote. Returning veterans, and also those from World War II, earned accolades for their service. For example, Comanche and Navajo Code Talkers in World War II were credited with passing secrets amid hostile fighting.
The returning veterans began demanding the right to vote and fought against discrimination. For example, Miguel Trujillo Sr., a Marine sergeant in World War II and a member of Isleta Pueblo in New Mexico, returned and waged a legal battle to overturn that state’s law that barred American Indians living on reservations from participating in elections. FILE – In this June 15, 2012, file photo, Jerry Best, a Vietnam War veteran of the Cheyenne tribe, dances on during a Native American blessing for veteran and active-duty servicemen in Camp Pendleton, Calif. “The Warrior Tradition,” a new film set to air on most PBS stations Monday, Nov. 11, 2019, examines the history of Native Americans in the U.S. military since World War I. (AP Photo/Gregory Bull, File)

Director Larry Hott said the veterans in the film believed military service was part of their family history and wasn’t just about a way to escape poverty. It’s part of a legacy that goes back generations, he said.

Myanmar Accused at UN Court of Genocide Against Rohingya