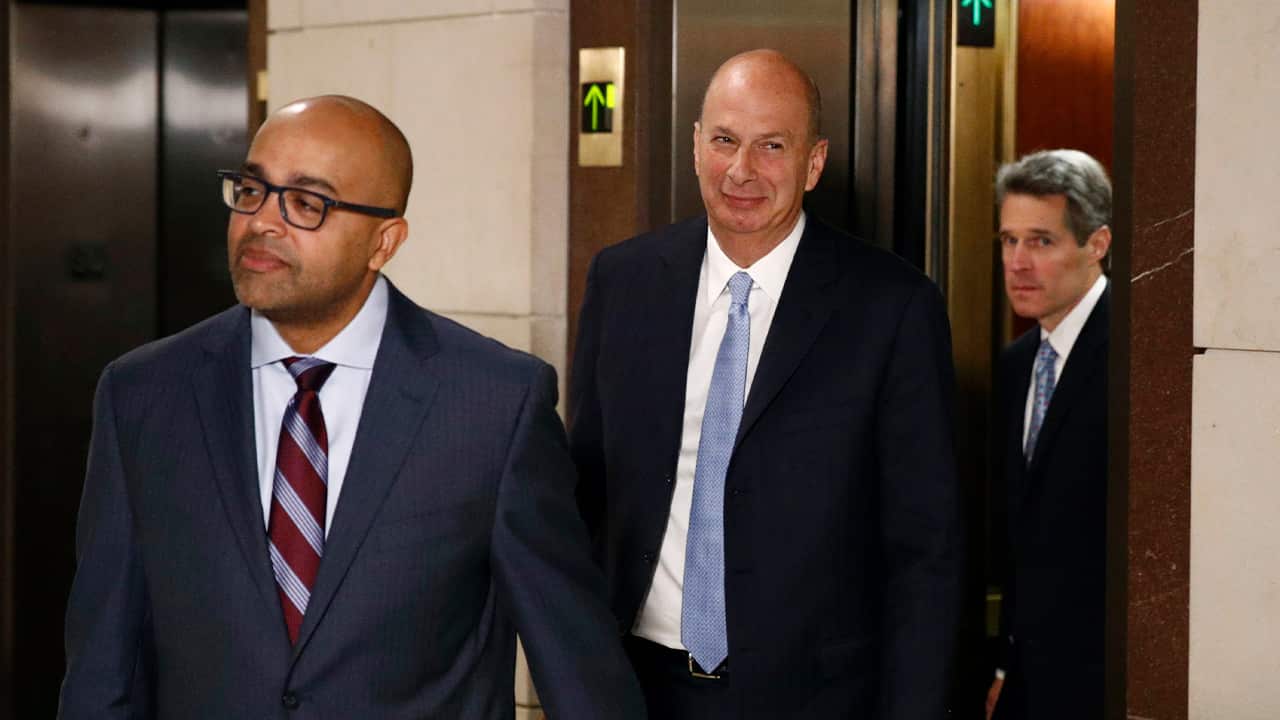 Trump has denied any quid pro quo, but Democrats say there is a singular narrative developing since the president’s July 25 call with Ukrainian President Volodymyr Zelenskiy when he first asked for “a favor.” That request, which sparked the impeachment inquiry, included a public investigation into Ukrainian activities by Democratic former Vice President Joe Biden and his son and Trump’s allegations of Ukrainian interference in the 2016 U.S. election.


Related Story: Do We Need to Worry About a Government Shutdown During Impeachment?

On Wednesday, the State Department’s third-ranking official is expected to tell Congress that political considerations were behind the agency’s refusal to deliver a robust defense of the former U.S. ambassador to Ukraine.
People familiar with the matter say David Hale plans to tell congressional impeachment investigators on Wednesday that Secretary of State Mike Pompeo and other senior officials determined that defending Ambassador Marie Yovanovitch would hurt the effort to free up U.S. military assistance to Ukraine. The people familiar with the matter were not authorized to discuss Hale’s appearance publicly and spoke on condition of anonymity.
Rep. Adam Schiff, D-Calif., the chairman of the Intelligence Committee, said the House panels conducting the inquiry are releasing the word-by-word transcripts of the past weeks’ closed-door hearings so the American public can decide for themselves.
“This is about more than just one call,” Schiff wrote Tuesday in an op-ed in USA Today. “We now know that the call was just one piece of a larger operation to redirect our foreign policy to benefit Donald Trump’s personal and political interests, not the national interest.”
Pushing back, White House press secretary Stephanie Grisham issued a statement saying the transcripts “show there is even less evidence for this illegitimate impeachment sham than previously thought.” FILE – In this Oct. 3, 2019 file photo, Kurt Volker, a former special envoy to Ukraine, is leaving after a closed-door interview with House investigators, at the Capitol in Washington. House investigators are releasing more transcripts Tuesday in the impeachment inquiry of President Donald Trump with hundreds of pages of testimony from two top diplomats dealing with Ukraine. Kurt Volker, the former special envoy to Ukraine, and Gordan Sondland, the U.S. Ambassador to the European Union, both testified about Trump’s interest in pursuing investigations of Joe Biden and Democrats as the White House withheld military aide to the East European ally. (AP Photo/Jose Luis Magana)

In the transcripts and accompanying cache of text messages, U.S. diplomats are shown trying to navigate the demands of Trump and his personal lawyer, Rudy Giuliani, who they soon learn is running a back-channel U.S. foreign policy on Ukraine.
“It kept getting more insidious,” Sondland told investigators, as the “timeline went on.”
Sondland testified that he spoke with Secretary of State Mike Pompeo about Giuliani, “and Pompeo rolled his eyes and said: ‘Yes, it’s something we have to deal with.'”
In his revised testimony, Sondland, a wealthy businessman who donated $1 million to Trump’s inauguration, says his memory was refreshed by the opening statements of two other inquiry witnesses, the top U.S. diplomat in Ukraine, William Taylor, and Tim Morrison, a European expert at the National Security Council.
The ambassador initially testified on Oct. 17 that he did not “recall taking part in any effort to encourage an investigation into the Bidens.” He told investigators he didn’t know that the Ukraine firm Burisma, that Trump wanted Ukraine to investigate, was linked to Joe Biden’s son Hunter.
But in the weeks since a May visit to Kyiv for Zelenskiy’s inauguration, Sondland and the other diplomats had been heavily involved in Ukraine policy and in text messages about what Trump wanted as they came to realize the military assistance was being withheld.
Volker and Sondland both testified they were disappointed after briefing Trump at the White House about the new leader of the young democracy who was vowing to fight corruption.

Trump Told the Diplomats to Work With Giuliani on Ukraine Issues

At a pivotal May 23 meeting, Trump “went on and on and on about how Ukraine is a disaster and they’re bad people,” Sondland testified. Trump Says the Probe Is Illegitimate

Questions swirled after a government whistleblower’s August complaint about Trump’s phone call with Zelenskiy.
By September, Sondland also told investigators, Trump was in a “bad mood” and nearly hung up on him when the ambassador asked what it was he wanted from Ukraine.
“I want nothing. I want no quid pro quo,” Trump said, according to Sondland. “I want Zelenskiy to do the right thing.”

As House investigators released more transcripts Tuesday, they also announced they want to hear from Trump’s acting chief of staff and a top aide to Pence, reaching to the highest levels of the White House.
Pence spokeswoman Katie Waldman said the vice president was unaware of the “brief pull-aside conversation” that Sondland reported having with Yermak. She also said Pence was unaware of the ongoing back-and-forth over the statement, and that it never came up during his meeting with Zelenskiy.
At a closed-door lunch Tuesday, Pence told Senate Republicans the funds were being withheld over concerns that the Europeans weren’t contributing enough aid and issues of corruption in Ukraine, according to a person familiar with the meeting but unauthorized to discuss it and granted anonymity.
Trump says the probe is illegitimate and the administration has resumed its efforts to block the inquiry as two more White House officials, an energy adviser and a budget official, declined to appear Tuesday before investigators, even after one received a subpoena.

Meanwhile, investigators said they wanted to hear on Friday from Trump’s acting chief of staff, Mick Mulvaney. They contend his news conference last month amounted to “nothing less than a televised confession” of Trump’s efforts to have Ukraine investigate Democrats and Biden as the White House was blocking military funding.

After Deadly Mexico Ambush, Stories of Bravery and Horror