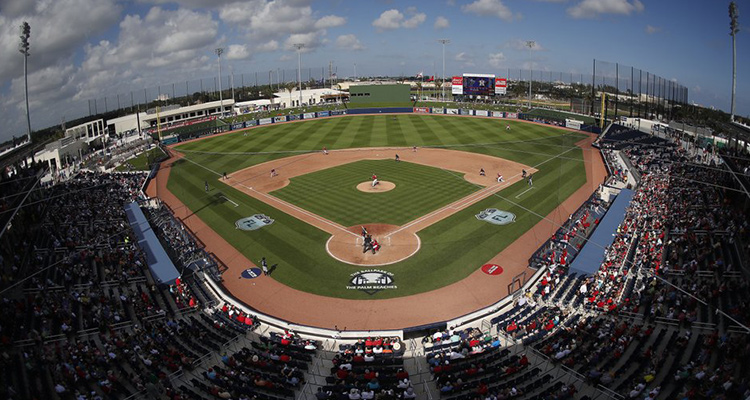 WEST PALM BEACH, Fla. — Asked how his Washington Nationals figured out Gerrit Cole in the World Series opener, Juan Soto didn’t have to look far for an answer.

“Pretty crazy, I never even thought about it. Must be something in West Palm. West Palm is good for us.” — Ryan Zimmerman

“I’m glad I face him in spring training,” Soto said.

In fact, all of the Houston Astros and Nationals see a lot of each other starting every February — they share the complex at the Ballpark of the Palm Beaches.

More than 200 days after breaking camp, they’ve ended the year on the same field with much more at stake.

“Pretty crazy, I never even thought about it,” said Ryan Zimmerman, who also homered off Cole in a 5-4 win Tuesday night. “Must be something in West Palm. West Palm is good for us.”

Meanwhile, forgive local fans coming to a World Series watch party this week at the park for feeling a bit conflicted. Major League Baseball has given permission to let them onto the field for free Friday night to see Game 3 on the video board.

The Astros and Nationals Began the Year With Workouts as Neighbors

There’s even been some talk around the diamonds of splitting Houston and Washington jerseys down the middle, then sewing the opposing halves together to create a hybrid NatRos shirt for employees to wear while watching the game.

“We work 50/50 for each team so we root for both equally,” grounds crew chief Matt Eggerman said. “In my book, we’ve already reached our goal.”

The Astros and Nationals began the year with workouts as neighbors, and they met in the exhibition opener. Jake Marisnick was the first batter of the game and homered off Nationals ace Max Scherzer, the winning pitcher Tuesday night.

“We see them in spring training so much,” Astros star Alex Bregman said.

This World Series matchup is the first in the modern era to feature teams that share a common spring training site.

In 1942, the St. Louis Cardinals and New York Yankees met after playing their spring games in the same park in St. Petersburg, but they worked out at different sites. Moving Purposely From One Spot to Another

“I’ve never been part of a World Series, and now we’re going double barrel here one month in with both these clubs. The 2019 world champion will open spring training right here in 2020.” — Matt Slatus

That complex was one of Matt Slatus’ stops during an 18-year career in baseball that brought him a few weeks ago to the Ballpark of the Palm Beaches as its new general manager.

Moving purposely from one spot to another, Slatus paused to reassure a flustered new staffer that Monday wasn’t indicative of a normal offseason day.

Never before has a complex been guaranteed to be the spring home of baseball’s champion even before the World Series’ ceremonial first pitch, and that has the Ballpark buzzing with energy.

“It’s a cool time,” Slatus said. “It’s an exciting time. It’s a pinch-me time. It’s kind of, oh my goodness, how did this happen?”

“I’ve never been part of a World Series, and now we’re going double barrel here one month in with both these clubs,” Slatus said. “The 2019 world champion will open spring training right here in 2020.”

It’ll be the second time in three years the complex can make that claim. A graphic painted on the wall outside Houston’s administrative offices, easily visible beyond the stadium’s left field foul pole, reminds visitors the Astros won the 2017 World Series — the same year both teams opened the facility.

The Nationals’ side is impatiently awaiting its first piece of celebratory artwork.

An additional graphic will be visible inside the ark next Feb. 22 when the spring training schedule opens with a night game — naturally, it’s a World Series rematch.

“You couldn’t script it any better,” Slatus said.

This week, a few minor leaguers have been working out at the complex. There also was the 14-under Perfect Game Fall World Championship game, with teams from Texas and Florida competing on the same diamond that Soto, Bregman and other big leaguers used.

“Playing on the same field as they play on, it’s cool,” Florida infielder Anthony Espinoza said.