The Fresno Unified School District board voted 7-0 on Wednesday to approve a positive job evaluation for Superintendent Bob Nelson, now in his third year at the helm of California’s third-largest school district. 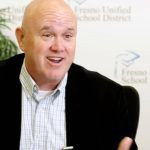 The board’s vote, which was taken in closed session, was announced early in the meeting’s open session and was met with applause from the audience. There were no public comments from trustees.
Nelson thanked the trustees for their continued support and said he was grateful for the opportunity to continue serving as superintendent.
“To have a 7-0 vote in what is a very complicated position is a really meaningful thing,” he said. “I want to offer my sincere gratitude for your trust and your support as we move forward.”

Nelson told GV Wire earlier this month that as he composed his 33-page self-evaluation, he looked for tangible signs of improvement, including support from the community. He found it in the August survey of voters on a potential bond measure that compared community opinions of the district in 2016 and 2019.
In 2016, 32% of the voters surveyed rated the district as excellent or good, compared with 45% in 2019. Meanwhile, 18% rated the district poor in the 2016 survey, compared with 11% in 2019.
“In the lead-up to my evaluation I was trying to conceptualize for the board how the culture of our district has changed, and I really didn’t have a quantitative measure to tell that story,” he said. “But a 13 percentage point change over three years when it was only 32 percent to start … it’s pretty substantive,” he said. “And I love the other one, that it went from 18 to 11 on the hater side. Because if you hate us, you’re in a fixed mindset and getting you out of that is really hard.”

Nelson’s self-evaluation points to a number of successes, including signing a new contract with the Fresno Teachers Association this year before the old pact had ended — the first time that had happened in the district’s history. But it also highlights the areas where improvement is needed, including suspensions, chronic absenteeism and student performance on math and English language arts assessments.
Nelson is in the third year of a four-year contract. His annual compensation of salary and benefits is $375,200, district spokeswoman Amy Idsvoog said Thursday.

Saturday Drama: Brexit Battle to be Decided in UK Parliament