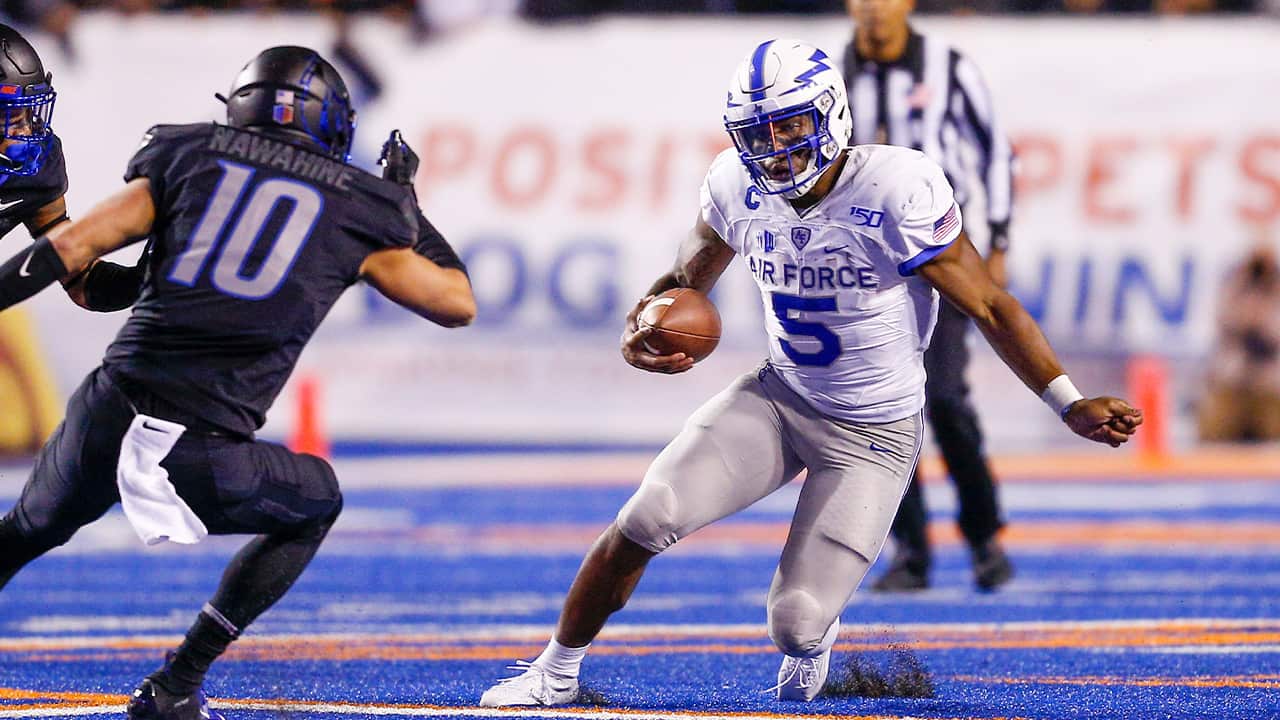 AIR FORCE ACADEMY, Colo. — Once Air Force got its ground game going, Fresno State had nowhere to go, run or pass.
Donald Hammond III ran for two touchdowns and threw for another, Kyle Johnson returned an interception for a score and Air Force pulled away in the second half to beat Fresno State 43-24 Saturday night.
“During the first half, we hung in there,” Fresno State coach Jeff Tedford said. “But the second half we couldn’t get off the field defensively …and we couldn’t sustain drives on offense.”
Air Force coach Troy Calhoun agreed with Tedford’s assessment.
“It was the tale of two halves,” said Calhoun, whose squad blanked the Bulldogs in the second half with an opportunistic defense and an offense that hung on to the ball with an effective running attack.

Air Force kept the Bulldogs bottled up on their side of the field throughout the second half.
Said Bulldogs linebacker Mykal Walker: “We need to look at ourselves before we start looking at anything else. It was embarrassing. The way we played tonight was not good and it is not the way that we play football here. Our goals are still ahead of us. We were all talking in the locker room, we know we need to keep our heads up and stay together. We are going to make a run for this thing.”
Bulldogs quarterback Jorge Reyna said afterward that Fresno State must direct all of its energy and focus to this Friday’s home game against  UNLV. The Rebels defeated Vanderbilt of the Power Five Southeastern Conference 34-10 Saturday.
“We aren’t worried about the next seven games, we are worried about the next one,” Reyna said. “Right when we get on the plane, our focus is on UNLV. We will watch tape, dissect them and be ready for Friday.”

Ben Waters caught a 53-yard touchdown pass from Hammond, who also ran for a 2-point conversion. Timothy Jackson ran 2 yards and Taven Birdow 3 yards for additional scores for Air Force (4-2, 2-1 Mountain West), which has won its last three meetings against the Bulldogs. Jackson led the Falcons’ rushing attack with 117 yards on 20 carries. Hammond ran for 37 yards and completed 2 of 3 passes for 81 yards.
Reyna had scoring passes of 4 yards to Derrion Grim and 7 yards to Emoryie Edwards, and Ronnie Rivers added a 26-yard touchdown run for Fresno State (2-3, 0-1). All of the Bulldogs’ scores came in an explosive first half, when neither team punted. Reyna finished 20 of 27 for 209 yards passing after completing his first 13 passes.
Trailing by two points at the half, the Falcons focused on their punishing run game to start the third quarter, chewing up ground and the clock in steady bursts. Hammond converted a fourth-and-1 play with a 3-yard off-tackle run to the 15 and, three plays later, Birdow finished off the drive with a 3-yard touchdown that put the Falcons up 29-24.
Air Force put together another time-consuming drive that Hammond ended with a 3-yard scoring run early in the fourth quarter and Johnson ended Fresno State’s ensuing possession with his interception, jumping in front of a receiver in traffic to swipe the ball on the run and race into the end zone untouched for the score. It was the second career pick-6 for Johnson, who also had a key sack in the first half.
(Associated Press contributed to this report.)