Eighteen-year-old Salman Khan is outside shooting hoops with a handful of friends, some of them his buddies since elementary school. Like Khan, the other players are Muslim young men; their basketball “court” is in a parking lot behind My Deen (it’s Arabic for “My Faith”), a nonprofit organization founded over a decade ago to give Muslim children and teens a place to gather in the Fresno area. 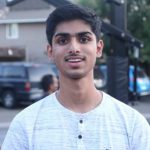 Khan, a Clovis North High School graduate who just started his freshman year at Cal Poly Pomona and plans to major in biomedical engineering, says he’s been coming to My Deen since he was a sixth-grader. It’s been an important part of his life.

“I definitely felt a sense of security, and more than that a sense of unity because going to public school, there isn’t a lot of Muslim youth that you can connect with,” says Khan, who previously served on the Muslim Youth Board. “But going here to meet all these Muslim youth being united and having one common goal, having the same values, is really, really neat and really helped me.”

My Deen was founded in 2007 as an organization for youth with a mission statement of “building character, fostering unity, and serving humanity.” Community outreach was important, as were the classes that taught Muslim youngsters about their faith and helped them develop their own community. Over time, My Deen has become more of a family-oriented organization, but it hasn’t lost sight of its original mission.

Organizations like My Deen are doing more than giving Muslim youngsters and their families a place where children can have fun and learn about their faith, says Reza Nekumanesh, executive director of the Islamic Cultural Center of Fresno. They are helping Muslims cement their self-identity as Americans, he said. 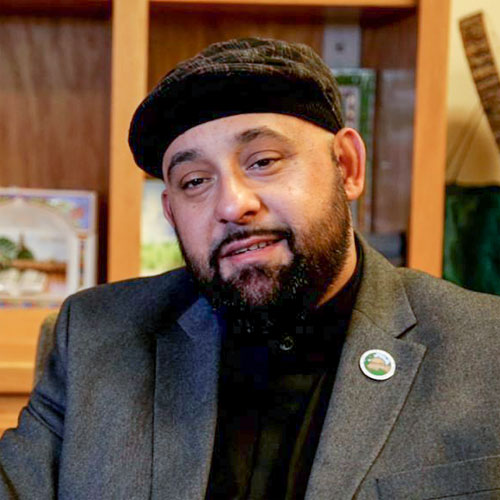 “What makes me more American is taking part in the infrastructure and the politics and the life. Your name is not what makes you an American.” — Reza Nekumanesh, executive director of Islamic Cultural Center of Fresno

A perceived lack of community connection has made it easier for other Americans to alienate and ostracize Muslims, who have not always been as involved in politics, the media, and other social structures as other immigrant groups, Nekumanesh says.

To try to fit in, Muslims did things like change their names from Mohammed to Mo, he says. But “the reality is what makes me more American is taking part in the infrastructure and the politics and the life. Your name is not what makes you an American.

“So My Deen is on that trend, is on that trajectory and that’s why they’re able to pull in from different parts of the community. Most of the mosques that exist in the United States are set up as places of prayer and service, but they’re not really thinking about two, three generations later, what does that look like for us. My Deen is.”

But Sheraz Gill and other My Deen founders weren’t thinking on such a macro level when they gathered to talk about the need to do something for the Muslim community, to unite people.

They saw that creating an organization for youth would benefit both kids and their mentors. My Deen’s early activities, which are part of its public service mission, linked it with the city and other agencies in a number of community service projects, such as helping with cleanups, feeding the poor, caring for the homeless. My Deen organized conferences and held sporting activities and educational programs.

“We wanted to create an opportunity where you have a safe place, you have programs that are creative, that are innovative, that are attractive,” Gill says. “It’s not just developing their faith or their morals and their character.”

Over time, My Deen widened its focus to be more family-oriented as Gill and others realized that the contact time with youth was limited to a few hours each week. Involving families would widen My Deen’s reach, with the goal of doing a better job of building up youth. New programs have sprung up, such as Mom and Me, My Deen Kids and My Deen Youth.

All that has led to a steady increase in attendance. Gill estimates that 300 families now are part of the organization. 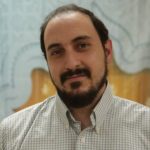 Program director Thabet Anani, a 31-year-old native of Jordan, says there are typically 50 to 100 elementary school-age children and 25 to 60 in the high school and college-age group, although that number expands especially for interfaith programs.

My Deen, which is in a former dialysis center on a side street near Saint Agnes Medical Center in northeast Fresno, looks like many youth centers — there are video games, ping pong, and pool tables, the basketball hoop outside.

The center also has a kitchen, offices, and classrooms where children and teens can learn about Islam while also learning Arabic, the language of the Quran.

There’s a large open room, half of which is carpeted for worship, the other half used for meetings, potluck meals, and other activities.

Not Your Typical Mosque

“We want to have an inviting environment for our youth as well because some of our youth are usually hesitant to go to mosques if they are not religious or if they have been far away from the community for a while,” Anani says. “My Deen … is a very open environment. Come as you want.

“You don’t have to be stressed about whether you’re going to be judged or how do you look or what you’re wearing because it is not a typical mosque.”

Anani came to Fresno, where several family members already were living, to earn his psychology degree. With his background in studying the Quran, his knowledge of Arabic, and his college education, the program director job was a good fit, he says.

“Even though many kids don’t learn Arabic in schools here, we try to give them a good foundation in Arabic through the Sunday school program,” Anani says.

My Deen will bring in motivational speakers who share their experiences and may help some youngsters learn about occupations or professions that they can see as achievable goals for themselves, he says. 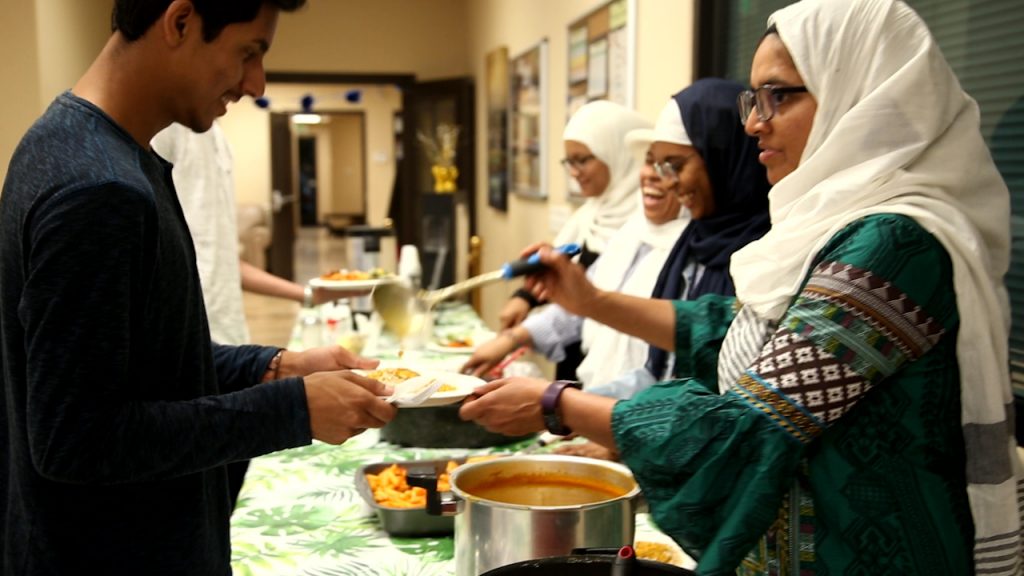 Friday nights are Family Night at My Deen. Saadia Rana, a Fresno dentist, is among the women serving up plates full of rice, tomato pasta, grilled chicken and salad.

My Deen has been important for the Rana family, she says: “We’re here every Friday. This feels like family. And we pretty much plan our Fridays around My Deen, that we’re going to go here and we’re going to spend the evening together with the other community members.”

Rana said that when her family moved to Fresno, she looked for a mosque where she could take her two sons and daughter. Other mosques in Fresno have programs for families, she said, but My Deen is “more family-oriented, more family-friendly.” 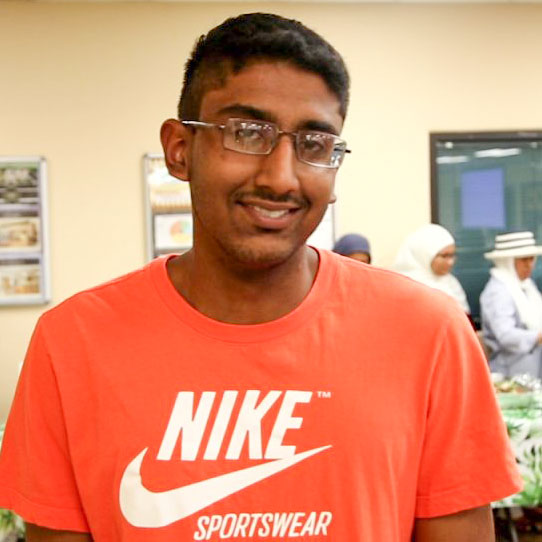 My Deen has helped connect Muslim youth who might otherwise not have known each other, says her son Talha Rana, 20, who is attending Fresno State. “Growing up in my school (Maple Creek Elementary in northeast Fresno), there wasn’t a lot of people that were like me, that were my faith. I couldn’t fit in with them. … So this gave me kind of a place where I could fit in and connect with other people that were going through the same issues.”

His 16-year-old sister Zainab says she tries to come on Friday nights as often as she can, but she’s also juggling school and sports. She’s been coming to My Deen since she was in kindergarten and has made a lot of friends there.

“I plan on attending the youth group,” Zainab says, then stops to giggle with a girlfriend standing next to her. “I’ve just been really busy with summer school and badminton, but I plan on doing that.”

The Friday night potluck dinner is followed by prayers. As is customary, men and women shed their footwear before stepping onto the carpeting that marks the area designated for worship. Men and young boys stand at the front, facing Mecca in a northeasterly direction. Women and young girls pray in the rear of the room, separated from the front by a screen.

Praying five times a day puts the Muslim faithful closer to the goal “to be always connected to God,” he says. The faithful follow a set of movements in salah, the act of worship, that include standing, bowing, kneeling and prostrating while repeating phrases like allahu akbar (God is the greatest).

The times of worship at My Deen are limited to its hours of operation, but that could change. A fundraising campaign is underway to build a new community center and mosque for My Deen, with $1.2 million already committed toward the $3 million goal. 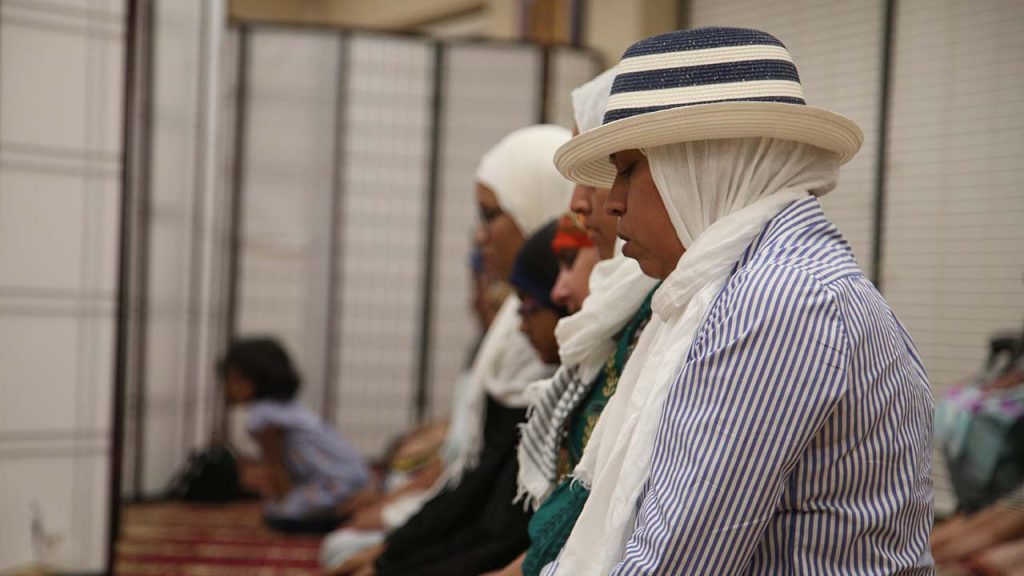 Women and men are separated by a screen during worship at My Deen. (GV Wire/Jahz Tello)

Gill says the design is still under review. He’s asked the board and the staff to gather together all their hopes and dreams for the new center, which will be weighed against the realities such as zoning restrictions and other factors. “So there’s some limitations,” he says. “We may not be able to do everything that we want to do there.”

“It’s really, really important for us Muslims to know what our identity really means, and to really be able to convey that to other people. I think that as the youth together, we’re able to figure that out really easily and help people see us as who we truly are.” — My Deen longtime member Salman Khan

He says he expects decisions on the project will be finalized in the next six to 12 months. In the meantime, My Deen will celebrate making its final payment on its current center, he says.

Having a center like My Deen might be more important now than ever, given the nation’s political climate, says Khan, the Clovis North grad.

“It’s really, really important for us Muslims to know what our identity really means, and to really be able to convey that to other people,” he says. “I think that as the youth together, we’re able to figure that out really easily and help people see us as who we truly are.”