Dominic Smith hit the final long ball of the season, a three-run drive in the 11th inning Sunday off Atlanta’s Grant Dayton that lifted the New York Mets over the NL East champion Braves 7-6.

Oakland’s Steven Piscotty started the barrage on March 20 in Tokyo against Seattle’s Marco Gonzales, the sixth batter of the season.

Minnesota hit three home runs Sunday to establish the big league team record with 307, one more than the Yankees. The previous mark of 267 was set last year by New York. This year’s Yankees became the first team with 14 players reaching double-digits in home runs.

“I don’t think anybody will ever forget the ‘Bomba Squad,'” first-year Twins manager Rocco Baldelli said.

Major League Baseball has asked for more scientific tests on baseballs, and Commissioner Rob Manfred expects to have results after the World Series.

The big league batting average rose four percentage points .252, a year after dropping to its lowest level since 1972, the season before the American League adopted the designated hitter.

“It’s such a huge accomplishment. To think where I was when I first came here to where it is now. I just came in and continued to work. It’s such an unbelievable moment for me.” — Tim Anderson

“It’s such a huge accomplishment,” said the 26-year-old Anderson, who hit .240 last year. “To think where I was when I first came here to where it is now. I just came in and continued to work. It’s such an unbelievable moment for me.”

Yelich wound up at .3292, just ahead of Arizona’s Ketel Marte’s .3286, as neither made it to the season’s final weekend. Yelich’s season ended when he broke his right kneecap by fouling a pitch of it on Sept. 10. Marte has not played since Sept. 17 due to lower back inflammation.

The New York Mets’ Pete Alonso became the first rookie since the modern era began in 1900 to lead the major leagues in home runs, hitting 53. Jorge Soler hit his 48th Sunday to become the Royals’ first home run champion. He finished three ahead of the Los Angeles Angels’ Mike Trout, who last played Sept. 7 because of a right foot injured that required surgery.

Washington’s Anthony Rendon led the major leagues with 126 RBIs and José Abreu of the White Sox topped the AL with 123. 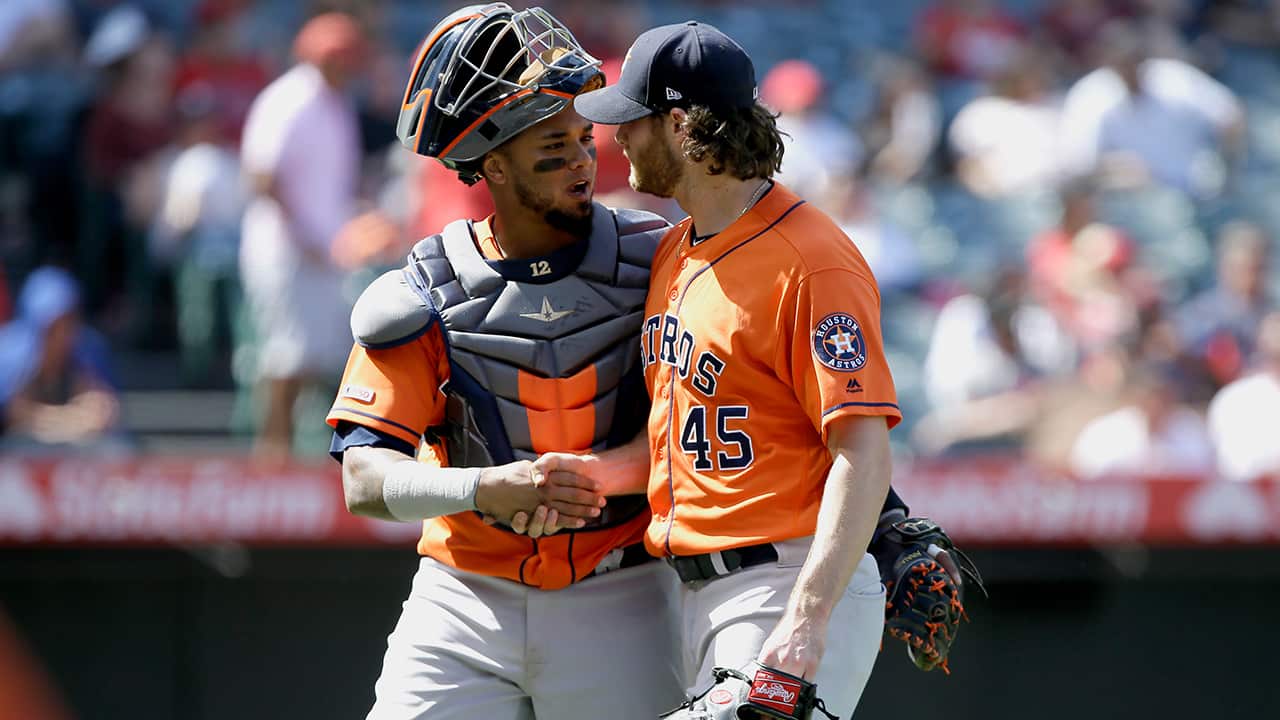 Houston’s Justin Verlander led the major leagues with 21 wins and teammate Gerrit Cole earned his 20th victory on the final day by winning his 16th straight decision. Boston’s Eduardo Rodríguez was in line for his 20th win before Matt Barnes blew an eighth-inning lead Sunday against Baltimore.

“I never really envisioned the numbers or anything. I envisioned getting better, and I did.” — Gerrit Cole

Cole led the major leagues with 326 strikeouts and Verlander had 300, the first teammates to reach the figure in the same season since Arizona’s Randy Johnson and Curt Schilling in 2002. Cole had 21 double-digit strikeout games, the most since Johnson in 2001, and became the first pitcher to strike out 300 with no complete games.

“I never really envisioned the numbers or anything,” Cole said. “I envisioned getting better, and I did.”

Jacob deGrom of the Mets led the NL for the first time with 255.

Atlanta’s Ronald Acuña Jr. had 37 stolen bases, the lowest total for an NL leader since Maury Wills’ 31 for the 1961 Los Angeles Dodgers. Seattle’s Mallex Smith led the AL with 46.