NEW YORK — Pete Alonso is slumping at the wrong time for the New York Mets.

And with little margin for error, their two most reliable relievers let a game get away Sunday night that might prove too much to overcome.

“Our depth is really good. A lot of guys that we can rely on in situations, and our depth was proven tonight.” — Jedd Gyorko

Jedd Gyorko got off the bench late and played a big role in rallying the Los Angeles Dodgers to a 3-2 victory that damaged the Mets’ dwindling playoff chances. They dropped four games behind the Cubs for the second NL wild card with 13 to go. Milwaukee trails Chicago by just one game.

New York visits also-rans Colorado and Cincinnati on its final road trip this week before hosting last-place Miami and NL East-leading Atlanta to finish the season.

“We’ve got a lot of fight on this team, so I wouldn’t count us out yet,” pitcher Zack Wheeler said.

Gyorko scored the tying run in the eighth inning on Chris Taylor’s double and hit an RBI single off Seth Lugo (6-4) with two outs in the ninth to put the NL West champions in front.

Los Angeles moved four games ahead of the Braves for the best record in the National League with 11 to play and closed within one game of the New York Yankees for the top mark in the majors.

“Our depth is really good,” Gyorko said. “A lot of guys that we can rely on in situations, and our depth was proven tonight.”

Brandon Nimmo laced an early two-run triple for the Mets, who managed only three hits and wasted an excellent performance from Wheeler.

‘The Needle’s Moved in the Right Direction’

Alonso, the rookie slugger tied for the major league lead with 47 homers, went 0 for 4 and is hitless in a career-worst 20 consecutive at-bats. He and teammates Jeff McNeil and Michael Conforto combined to go 0 for 25 in the three-game series.

“It’s been a tough go, but I feel fine,” Alonso said. “Just haven’t been necessarily capitalizing on some pitches and I need to do a better job at that.”

Scuffling closer Kenley Jansen (5-3) worked a perfect eighth. Kenta Maeda got two outs for his fifth career save and second this season.

Jansen said he’d been “dragging” his arm too much but has figured out the mechanical flaw that was troubling him.

“The needle’s moved in the right direction,” manager Dave Roberts said. “He’s peaking, I think, at the right time.”

Wheeler pitched seven outstanding innings for the Mets, and Justin Wilson was summoned to protect a 2-1 lead in the eighth. But the left-hander, who saved Saturday’s win with a perfect ninth and had a 1.40 ERA since coming off the injured list July 2, was out of sorts.

He issued a leadoff walk to Gyorko, who was pinch-hitting, and balked him to second when he caught a cleat on the mound. An up-and-in wild pitch that sent Max Muncy sprawling to the ground moved Gyorko to third, and he scored on Taylor’s one-out double off the right-center wall.

Mets nemesis Corey Seager shaved it to 2-1 with a two-out RBI single off Wheeler in the fourth. Muncy scored with a good slide on a close play at the plate. 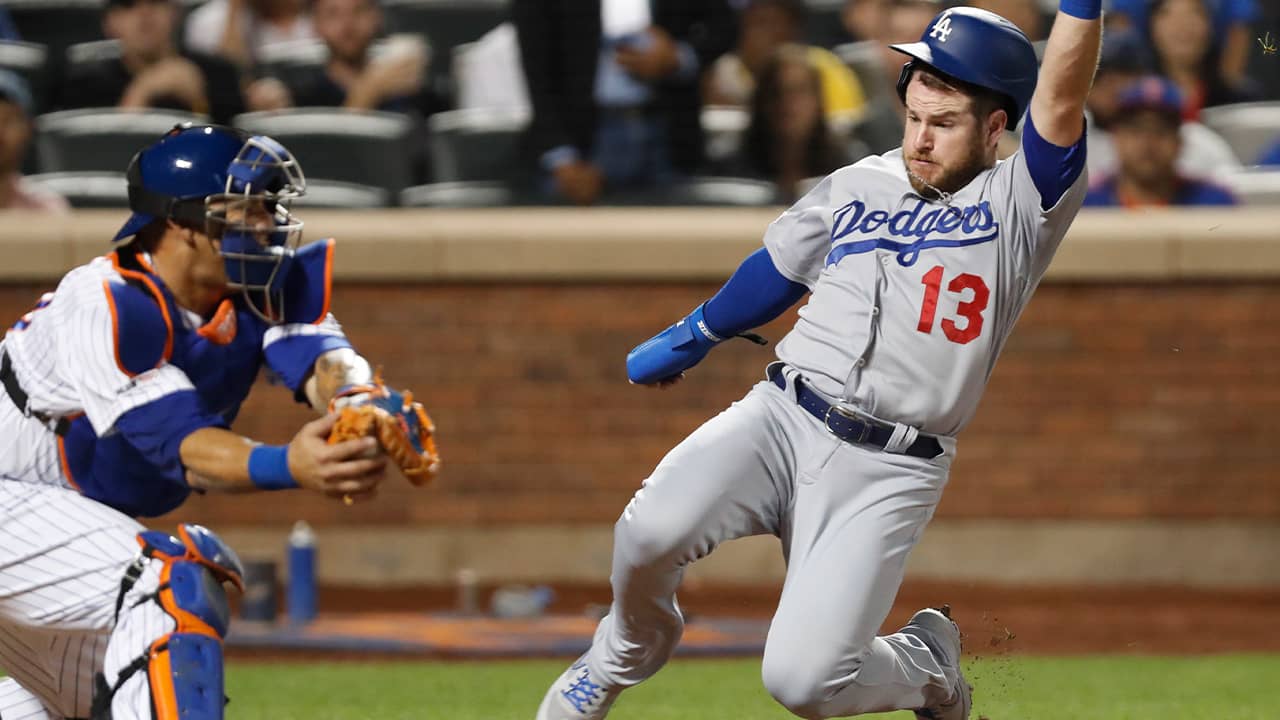 Kiké Hernández got the Dodgers going in the ninth with a one-out double that left a hole in the wall: Center fielder Juan Lagares knocked open a door panel when he crashed into the left-center fence trying to make a leaping catch at the 370 sign.

That’s One Way to Do It

Alonso got knocked backward at first base on a hard grounder by Gavin Lux in the ninth but sat up and threw him out from the seat of his pants.

Los Angeles took two of three from the Mets and has won 32 series this season, equaling the franchise record set in 2017. The Dodgers have won 10 of their last 11 games at Citi Field and are 19-6 in the ballpark since 2012 — the best mark in the majors during that span, according to STATS.

The Dodgers have won 10 of their last 11 games at Citi Field and are 19-6 in the ballpark since 2012 — the best mark in the majors during that span, according to STATS.

Dodgers: 3B Justin Turner might not be ready to return to the lineup Tuesday against Tampa Bay as originally planned. He hasn’t played since Sept. 7 due to a sprained left ankle. “If he’s not 100% where he needs to be, then I have no problem pushing it back,” Roberts said. “He’s still feeling it.” … Muncy’s leadoff single in the fourth was his first hit since Aug. 25, snapping an 0-for-14 skid. He returned Friday from a fractured right wrist that had sidelined him since Aug. 29. Muncy finished 1 for 5 with three strikeouts. … With two off days this week, the team’s top three starters — Clayton Kershaw, Hyun-Jin Ryu and Buehler — will all get extra rest before pitching next weekend against Colorado.

Mets: 3B Todd Frazier was available off the bench, manager Mickey Callaway said. Frazier was hit on the left hand by a pitch late in the game Saturday night. … LF J.D. Davis was hit in the left side by a 96 mph fastball from Dustin May in the seventh. Davis said he’s fine, just a little sore, and Callaway said X-rays were negative.