Robert Costa Returns to Fresno to Talk Trump, Congress, and 2020 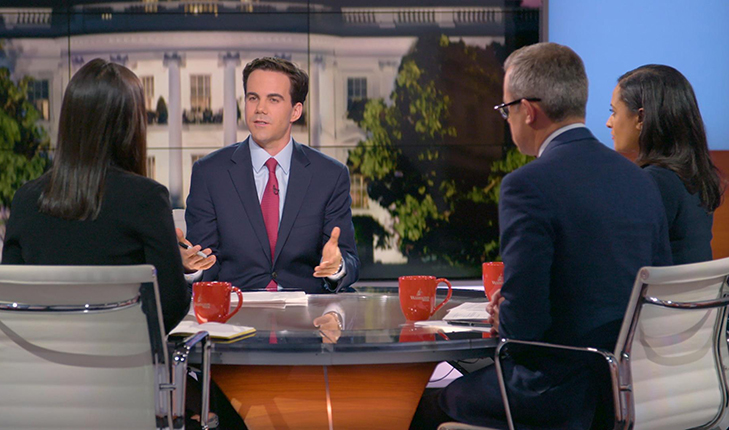 By Lisa Boyles
fresnostatenews.com
Robert Costa, a national political reporter with The Washington Post and moderator for PBS’s “Washington Week,” will return for the President’s Lecture Series at Fresno State, where he will offer insights on President Donald J. Trump, the U.S. Congress, and the 2020 presidential election.
The event is scheduled for 7 p.m. Tuesday, Oct. 1, at the Save Mart Center. Admission is free and the event is open to the public.

“I’m pleased to welcome back Mr. Costa, who has developed close ties with our journalism students and faculty since his first campus visit in 2017.” — Fresno State President Joseph Castro

Following his lecture, Costa will moderate a panel of Fresno State students and professors in a wide-ranging discussion of state and national issues. The panelists will be:

After the panel discussion, the evening will conclude with Costa answering questions from the audience.

The President’s Lecture Series, which began four years ago, features prominent national guests invited to campus by Fresno State President Joseph I. Castro.
“Community members who attend this event will learn fascinating and thought-provoking insights from Robert Costa, who has first-hand interactions with President Trump and members of Congress,” Castro said. “I’m pleased to welcome back Mr. Costa, who has developed close ties with our journalism students and faculty since his first campus visit in 2017.”
Other national figures who have participated are New York Times columnist David Brooks (2016), presidential historian Doris Kearns Goodwin (2016), New York Times foreign affairs columnist Thomas L. Friedman (2017), presidential historian Michael Beschloss (2018) and publishing executive Steve Forbes (2019). Costa was a featured guest in fall 2017 and 2018.
The President’s Lecture Series brings speakers to campus to further inform the community on matters that affect the vitality of the Central Valley. Last year, Costa provided insight on the challenging political climate for both parties.

Costa is also a political analyst for NBC News and MSNBC. His daily reporting includes in-depth coverage of both Congress and the White House. He has also recently interviewed President Trump, Vice President Michael R. Pence, House Speaker Nancy Pelosi, and several Democratic presidential candidates.
Costa holds a bachelor’s degree in American studies from the University of Notre Dame and a master’s degree from the University of Cambridge.
The appearance is co-sponsored by the Fresno State Institute for Media and Public Trust, The Fresno Bee, KSEE24, and Valley PBS.
Doors open at 5:30 p.m. to allow time for security measures as guests enter the arena. No backpacks are allowed. Parking at the Save Mart Center will be free.