LOS ANGELES — Marvel Comics is celebrating its 80th anniversary with a massive issue that pays tribute to its history and introduces a new object with implications for the superhero universe going forward.

The Marvel Comics 1000 issue, available Wednesday, pays homage to many of Marvel’s most recognizable characters, including Iron Man, the Hulk and Spider-Man, and also spotlights some lesser known ones. Each page is devoted to a year in Marvel’s history, with the first one recounting the creation of the Human Torch in Marvel Comics No. 1 in 1939.

A mix of serious and humorous stories follows, like the page devoted to 1944 in which Captain America explains why he fights, Dr. Strange’s struggle to keep his magic cape smelling fresh (1951), the introduction of Groot (1960) and a page devoted to Iron Man’s suit for 2008, the year Marvel’s blockbuster film franchise launched.

“I definitely wanted this to be a range of experiences and not have it be an 80-page chucklefest” nor “an 80-page downer,” said Tom Brevoot, the issue’s editor.

Brevoot said he gave the issue’s dozens of creators general guidance, but also the freedom to explore a character or story line in a single page. Many of the pages adopt what Brevoot called a “confessional” approach where a character is speaking to an interviewer. The page for 2017 features superheroes’ answers to “What do you regret,” or another in which Deadpool takes a little too long to answer one of the issue’s recurring questions, “Why do you do what you do?” 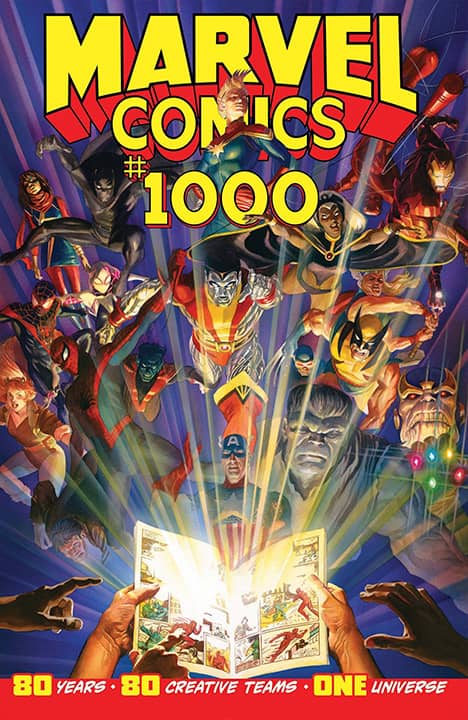 Styles Range From the Simpler Drawings to the Hyper-Detailed Style

Brevoot said: “Even if you don’t like very single page, there’s another page right after it that’s different.”

The artistic styles range from the simpler drawings of early comics to the hyper-detailed style of some contemporary titles. There are numerous guest writers, including authors Neil Gaiman and Brad Meltzer, basketball great Kareem Abdul-Jabar and film directors Phil Lord and Christopher Miller.

Brevoot said he enlisted people he knew were fans of Marvel comics with the aim of adding a “cool flavor” to some of the pages and “show the reach that Marvel has had over 80 years that you don’t really see.”

Controversy emerged Tuesday after The Hollywood Reporter posted a story noting that the text on Captain America’s page representing 1944 had been altered from an early version that pointed to inequalities in America and flaws in its systems. The revised text has Captain America talking about fighting injustice and how hatred, bigotry and exclusion are not patriotic values.

Marvel did not comment on the changes and interviews for this story were completed before the Reporter’s story was posted.

While many of the pages are one-offs, about a quarter of the issue is devoted to a story line that traces back to Marvel’s infancy about a trio of men trying to harness the power of a black mask that has been passed down for centuries. Whoever wears the mask gains powers that give them a fighting chance against even the strongest superheroes. 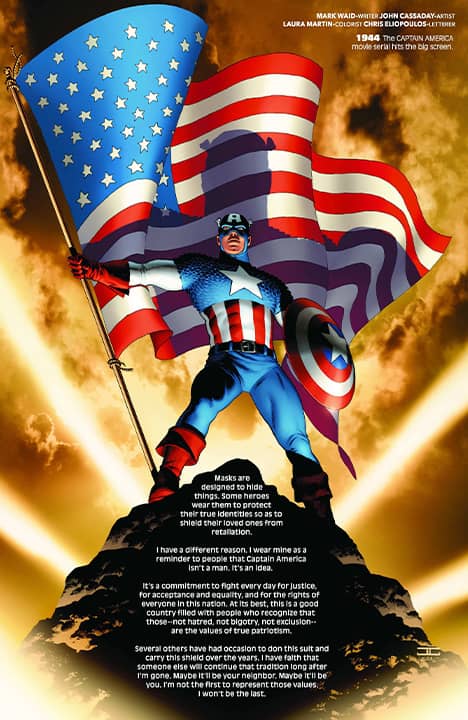 Most of Marvel’s Vast Catalog Is Now Available Digitally

Before Marvel 1000, the trio called the Three Xs appeared in only a single Marvel issue from 1940. While other characters from Marvel’s early days have been reimagined, writer Al Ewing said the old story of the Three Xs “had something very familiar about it” and provided a seed to bring a broad story that fit not only the anniversary issue, but one that will continue in upcoming comics.

Ewing, who is credited as the issue’s “mastermind,” said he scoured old Marvel issues to make sure there were enough bread crumbs that Marvel 1000 could go back and find later. “I didn’t want to do too much that readers couldn’t go and hunt down themselves,” Ewing said.

Most of Marvel’s vast catalog is now available digitally through its Marvel Unlimited subscription, making research for Ewing, and fans, easier.

At its core, Ewing said he hopes readers walk away with an understanding about what it means to be a Marvel hero.

“We talk a lot about kings, and there are quite a few Marvel heroes who are kings,” he said. “But we also talk about the other side of that, the hero that rises from the commonality of humanity, the hero who could be you.”