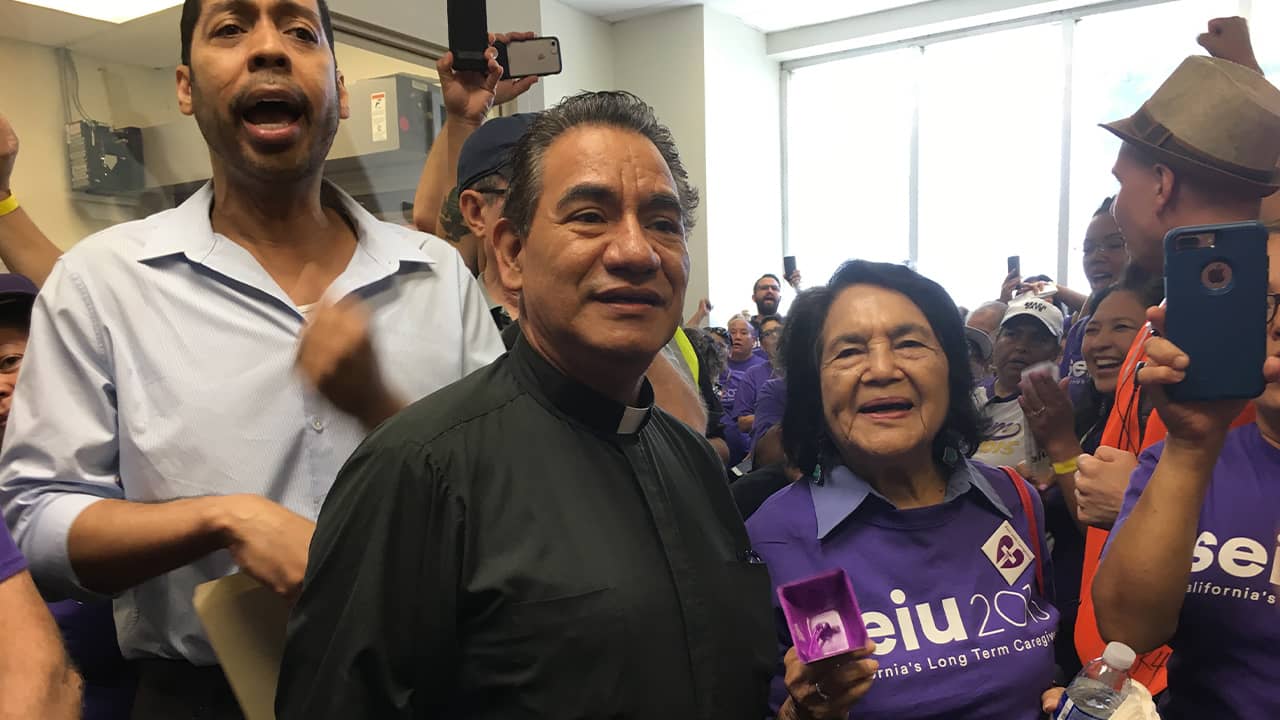 Dolores Huerta emerged from the tunnel beneath the Fresno County Courthouse to the thunderous cheers of the purple-clad SEIU 2015 members. The labor icon thusly fulfilled a prophecy she made earlier Tuesday morning about being arrested. She had no trepidation when she was handcuffed by Fresno County deputies.
“I believe it is a non-violent tactic. When you do everything else to get their attention and they won’t listen, sometimes you have to raise the ante a little bit,” she said prior to the protest.

@DoloresHuerta emerges from detention after arrest at @SEIU2015 protest over in-home support services wages at #Fresno Board of Supervisors. pic.twitter.com/L2Quk5XATD

In total, eight people were arrested in protests at the Fresno County Hall of Records, outside the hallway of the Board of Supervisors meeting. Huerta and five others were cuffed, cited, and released for disrupting official business. Deputies also arrested two others, SEIU 2015 executive vice president Arnulfo De La Cruz and David Werlin, for obstructing a doorway of a public business establishment and resisting arrest. They were booked into Fresno County jail.

The nationally renowned Huerta, an inspirational leader of the Valley’s labor movement and co-founder of the United Farm Workers, joined hundreds of union protesters, demanding higher wages for In-Home Supportive Services employees. They occupied the hallway outside the Board of Supervisors meeting. By the time they got there, the supervisors retreated to closed session, and the doors were shuttered.

Approximately 100 protesters gathered in the hallways, the heat rising figuratively and literally. Any time a county employee emerged from the back into the hallways, protesters showered them with boos — “the line of shame” one labor leader called it. The only physical interaction was when a body was hit while blocking a door that a county employee attempted to open from the other side.
After the supervisors meeting ended, more deputies arrived. Using a bullhorn, one sergeant declared the protest an unlawful assembly and ordered the protesters to leave. Most did, with those remaining well aware of the consequences.
In addition to Huerta, Holly Hickenbottom, Martha Valladarez, Roberto De La Cruz (father of Arnulfo De La Cruz), Don Meas, and Robert Navarro received citations. Like Huerta, they were greeted with cheers when they were released. Punishment is up to 90 days in jail and/or up to a $400 fine.
“The Fresno County Sheriff’s Office had many deputies there to ensure that this was a peaceful protest and it did not disrupt business being conducted by citizens at nearby offices.  From our standpoint, everything went smoothly,” sheriff spokesman Tony Botti said in a news release.

As described by the labor leaders present, IHSS workers are funded through federal, state, and local money. They work for the state but negotiate wages and conditions with the county. It has been more than a decade since their last raise, by their account. They are seeking a $1 above the current minimum wage of $12 an hour. At a negotiating session last month, the county offered only a 10-cent raise over a period of years, SEIU representatives said.
“It’s a complete lack of respect,” union spokeswoman Melissa Uribe said. “It’s frustrating.”
Supervisor Buddy Mendes, prior to the meeting, said more negotiations are needed.
“They need to bargain at the table. It’s a state program,” Mendes said.

A Personal Cause for Soria

Approximately 17,000 IHSS employees work in the county. Many take care of sick relatives. Fresno councilwoman and congressional candidate Esmeralda Soria addressed the crowd after the protest.
“My dad had to become a healthcare worker for my mother,” Soria said, noting her mother suffered from dementia. “My dad was forced to retire. He was earning about $40,000 previously. But, today, he is earning minimum wage for 20 hours a week, when the work is 24/7.”
Soria noted she came “across the street” from Fresno City Hall. She did not mention that she is running for Congress against fellow Democrat and incumbent Jim Costa.
But, her three-minute speech drew the attention of labor leaders.
“We’ll remember this,” one said.

“We should keep on protesting,” Huerta said at an impromptu news conference following her release.
Dereck Smith, executive vice president SEIU 2015, said their leaders are scheduled to go back to the table with county negotiators later this week. 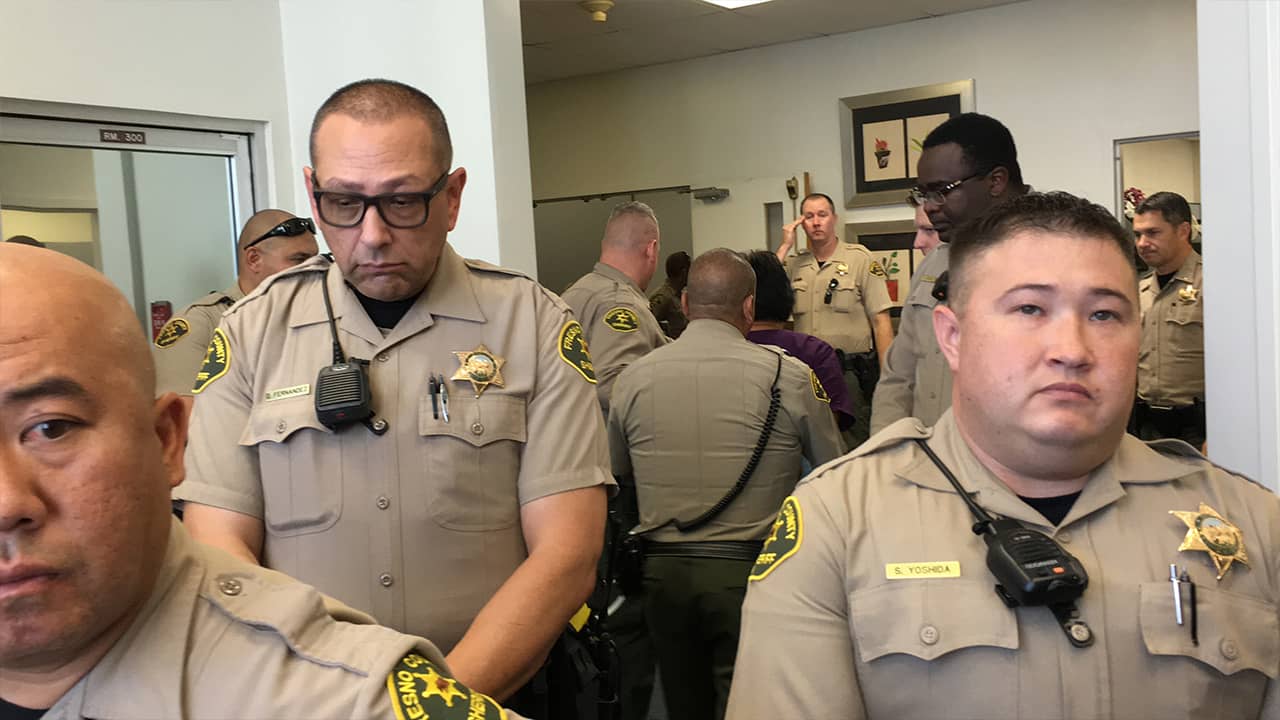 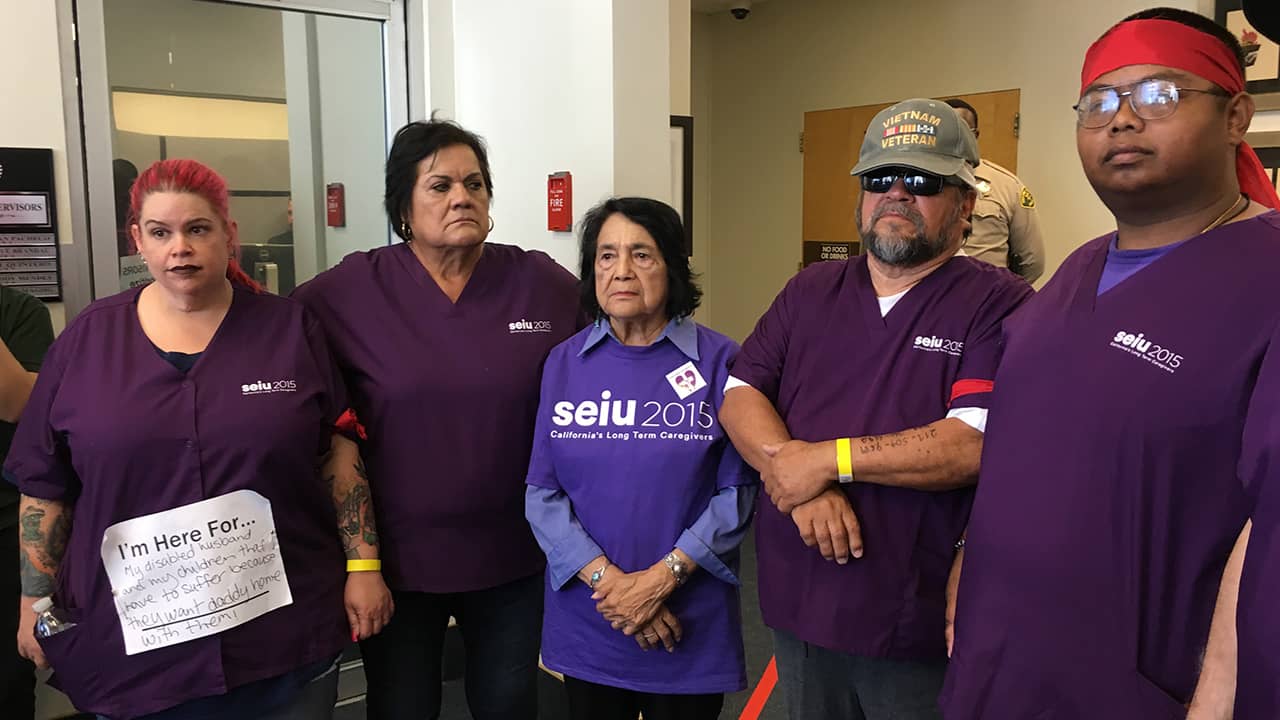 From L to R: Holly Hickenbottom, Martha Valladarez, Dolores Huerta, Roberto De La Cruz and Don Meas refused to leave after being ordered to disperse. They were arrested, cited and released. 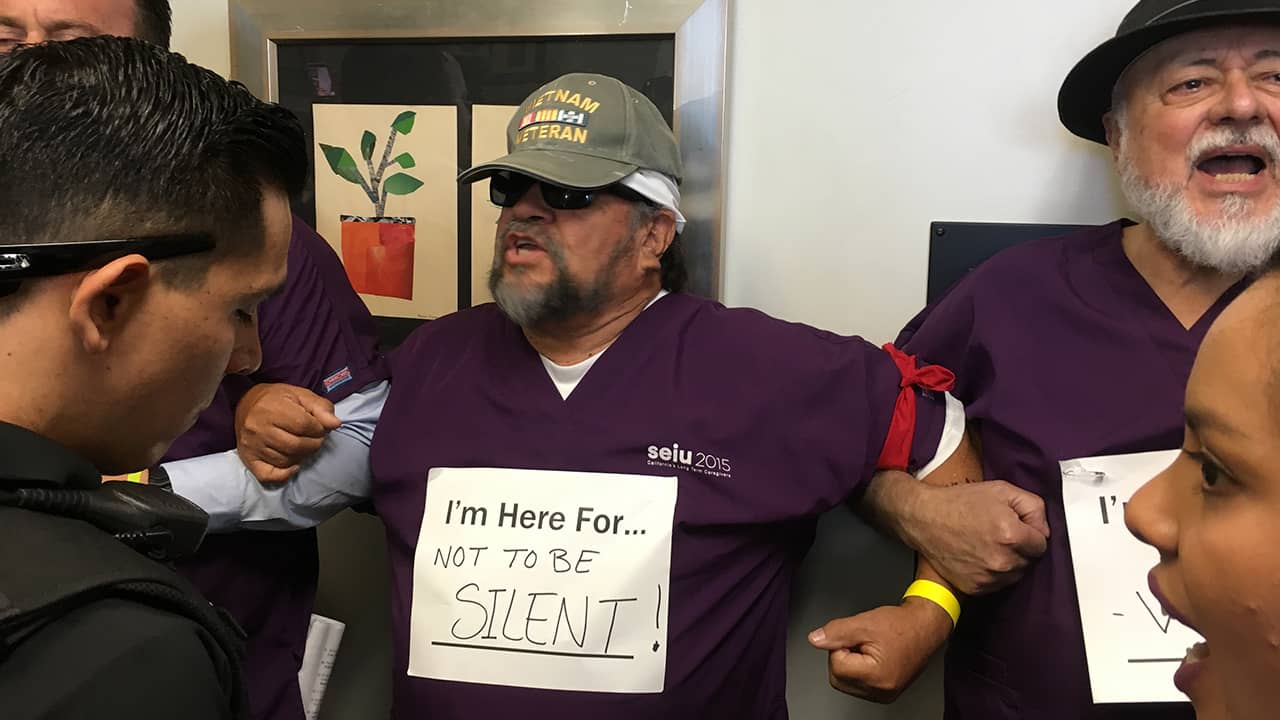 Robert De La Cruz (left) and Robert Navarro link arms at a protest at the Fresno County Board of Supervisors.

Grandson of Indian Immigrants Is Fresno State Ag One President