The funding is in place. The permits are being lined up.
Soon, Jake Lingo hopes to demolish a group of industrial buildings in central Fresno and start building a $38 million mixed-use project. A health clinic will be on the first floor. The remaining three stories will house 88 apartments, modern and affordable. 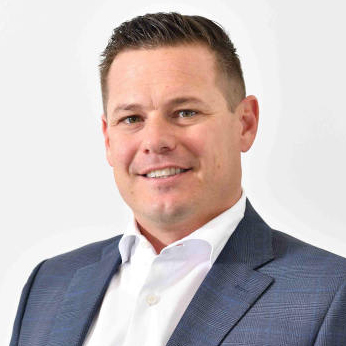 “It’s going to be really cool to see this corner start to remold itself into an urban core mixed-use development.” — developer Jake Lingo
He calls the project a “catalyst” to urban redevelopment.
Despite receiving his approval from the city in 2017, those old buildings remain. The project has yet to start.
While many of the business tenants — mostly automotive-industry related — moved out, John Kinsfather isn’t ready to leave.

A Battle Over Relocation Funds

Kinsfather operates Hypercycle, selling and servicing used motorcycles. He’s been at the same location on the southwest corner of Blackstone and McKinley avenues since 1991, with a month-to-month lease for $990 a month made on a handshake deal. 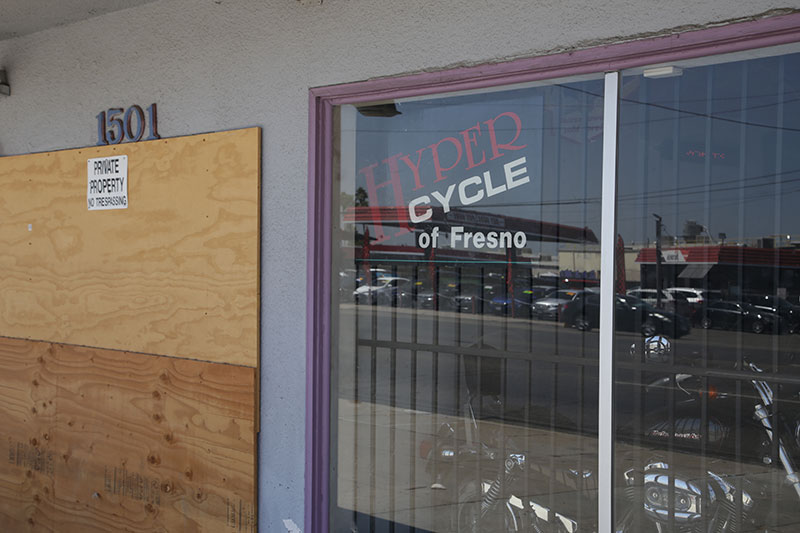 Hyper Cycle’s owner feels he is not being offered enough relocation assistance to move.

Lingo’s company, Integrated Community Development, now owns the property. It plans to tear the buildings down and build a 7,500 square foot retail/residential unit in its place.
“It is one of the first steps of the redevelopment of the Blackstone corridor,” Lingo said. “It’s going to be really cool to see this corner start to remold itself into an urban core mixed-use development.”
Before demolition can take place, ICD needs to move the existing businesses out. The California Relocation Assistance Law requires financial help for people or businesses, like Kinsfather’s, that are moved out by state-funded projects.
“We’ve been going through that process, which has been a positive one. As you can imagine, relocating eight established businesses from that location and helping them to find new locations of business has been a process. It has been a successful one,” Lingo said.
Kinsfather says that the company ICD hired to manage the move, OPC, is giving him the runaround on what he needs to move. 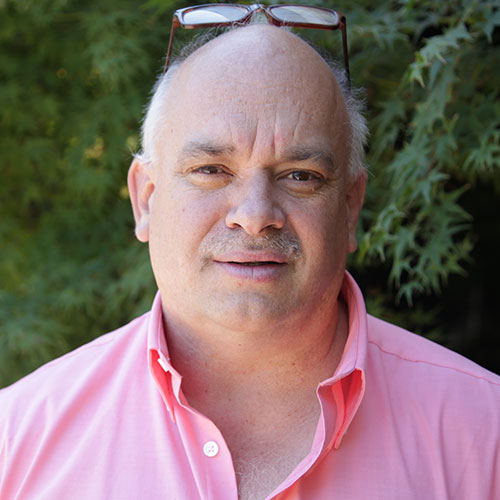 Tenants knew a move was coming after word spread about the proposed housing project. They starting receiving informational notices in 2016 from OPC. Follow-up letters came over the next two years.
“Our initial meetings with (OPC) was they were going to come in and just do everything for us — provide relocation assistance, provide leads, assess personal needs for the company. They made it sound like they were going to be a concierge for the move,” Kinsfather said.
Kinsfather doesn’t necessarily have a problem moving.
“I understand progress and we have to participate in it,” Kinsfather said. But, his contention is that the developer isn’t meeting his obligation for relocation expenses.
Based on the letters, Kinsfather believed he would receive money to help with moving. He got frustrated with a lack of details.
Meanwhile, Kinsfather researched how much it would cost to move his business. It wouldn’t be cheap or easy.
“It’s going to be difficult for me to find the zoning as a vehicle dealer,” Kinsfather said. He estimated he needed a half-acre, which would be difficult to find in the area. So, he needed to put his current inventory of vehicles in storage.
In April, Kinsfather received a 30-day notice to move. Taking a drastic measure, Kinsfather refused to pay rent. Six weeks later, he received a 3-day quit or pay rent notice. He has since paid up his rent. 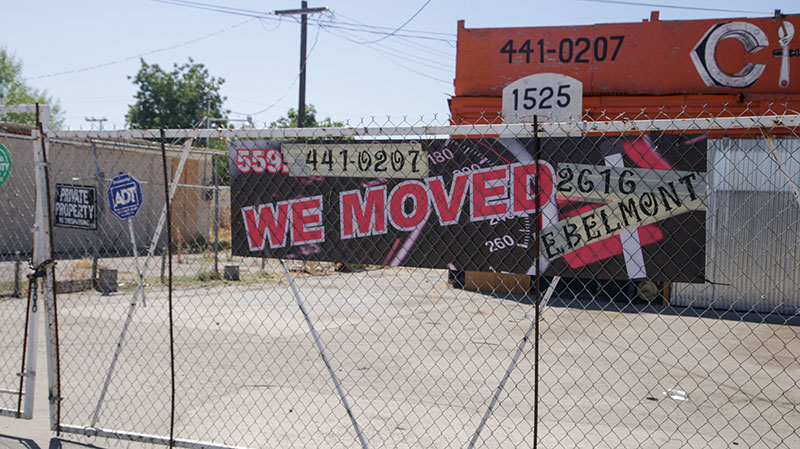 Chill’s Auto Repair moved its business from Blackstone and McKinley to a location on Belmont.

Kinsfather said he spoke with Lingo and sought help from the office of Councilwoman Esmeralda Soria’s office.
“I’ve been monitoring what’s going on. This is a project that’s been very important to me. I will continue to honor the process between the property owners, the developers, and the neighborhood,” said Soria, who represents the district where the project is located. She added that she hopes everyone gets their needs met.
As for now, Kinsfather remains in the space but is not actively operating.
“I’m hibernating, I’m not doing a lot. I didn’t feel like I could open up full-time again or that I wanted to. I wanted to get moved,” Kinsfather said. He runs the business by himself, with no employees.
Lingo would not comment specifically on his negotiations with Kinsfather but said he is confident the matter will come to a successful conclusion.
“We have been working with all of the business owners to successfully relocate those tenants,” Lingo said. “We have followed all of the (law’s) requirements.”


The owner of another business in the area called the move to another part of the city “stressful.”
Kinsfather hired legal help and was advised not to accept more money from OPC — about another $20,000 — until the relocation expenses are settled.
“My goal is to get paid, so I can get on with my life,” Kinsfather said.
Lingo understands the challenges of moving.
“We have tried to be compassionate toward the business owners. They’ve been there for a long time,” Lingo said. “We have tried to work with them and make this as comfortable as possible. It’s never going to be easy.”

On a hot summer afternoon, the buildings that comprise of the future development are mostly emptied. Some are boarded up. Others appear abandoned.
The only souls at the location on Blackstone, between Home Avenue to the south, and the train tracks to the north (by McKinley Avenue) were two men doing construction work. Another apparently homeless man wandered around a car repair business, where there were remnants of a limo with no wheels parked in front.
Hypercycles remains closed, even with a motorcycle in the display window. To the business’s left is Mid-Cal Engines & Transmissions. Neighbors say the owner closed up shop completely. 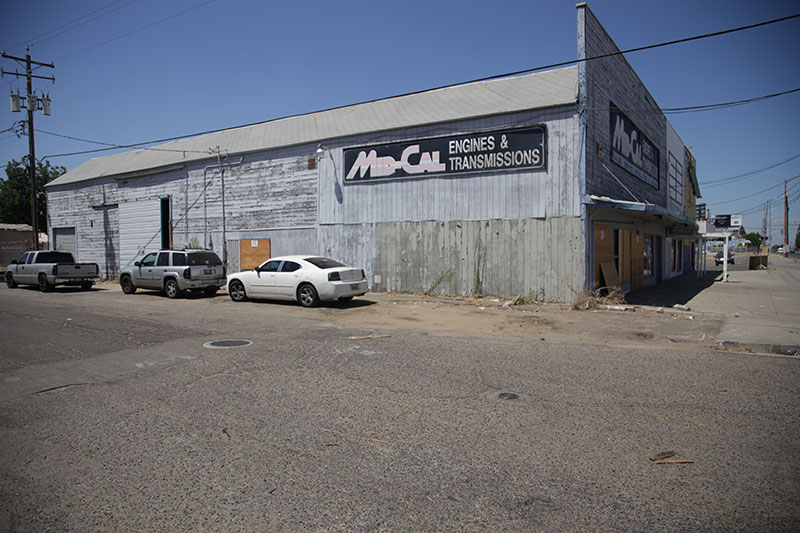 Neighbors say the owner of Mid-Cal closed down the business rather than move to a new location.

To the right of Hypercycles is the former location of Jorge’s Tires. Big signs notify customers it moved a half-mile down Blackstone toward Olive Avenue. Business there on one summer afternoon seemed steady.
The owner of another business in the area called the move to another part of the city “stressful.”

Once the buildings are destroyed, Lingo anticipates 18 months to build, with an estimated 2021 opening.
The owner did not want to be named, but said “Change is not always easy, but you have to make the best of it … We didn’t have any other options, but to do it.”
The business did note its moving cost of $20,000 was compensated by OPC.

The project will be financed mostly with public money, most of it from the state. Of the $38 million price tag, approximately $5 million (in loans, grants, fee exemptions) will come from the city, approved in December 2017.
Some councilmembers at the time balked at the price tag. Then-councilman Steve Brandau said it would be cheaper just to buy homes for everyone in northwest Fresno.
Once the final tenants are cleared, Lingo says, the buildings will be destroyed. Clean-up and grading will take place, and construction will start. He anticipates 18 months to build, with an estimated 2021 opening.
Lingo said the yet-to-be-named project, along with bus rapid transit and improvements at nearby Fresno City College, is “going to be a shining example of what the future of development in Fresno can look like.”