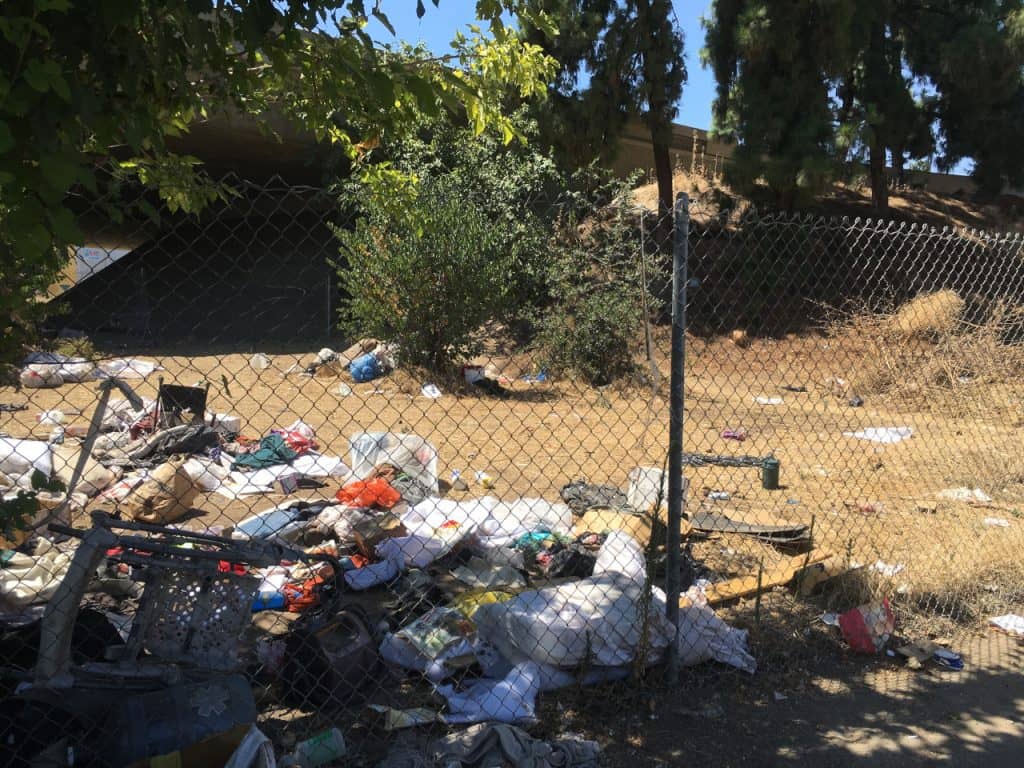 Caltrans representatives told members of the Fresno City Council that they also are frustrated, overwhelmed and understaffed when it comes to cleaning up the areas near highways.
It wasn’t an official council meeting, but about two dozen representatives from the city, Caltrans law enforcement, and state legislative staffers met at City Hall on Thursday morning to talk about the problem.
“Our highways look like Third World countries,” councilman Garry Bredefeld told the group. “It’s a terrible impression for our city.”
Bredefeld and fellow councilman Miguel Arias have aired their complaints over the past few weeks about problems around embankments, onramps, and offramps to the three main state highways that traverse Fresno: 41, 168 and 180.

John Liu, Caltrans deputy director for District 6 — which encompasses Fresno, Madera, Kings, Tulare and parts of Kern counties — spoke on behalf of his three-member delegation to the meeting.
He said his agency doesn’t have the resources to fully maintain its highways. That includes challenges such as mowing, finding volunteers, and especially dealing with the homeless.
Of the $49 million in the District 6 annual budget for maintenance, about 10% goes to the Fresno-Clovis area.
“The illegal encampment issue has exploded in the last few years,” Liu said.
Because of rulings in civil rights court cases, Caltrans must post a warning 72 hours in advance if they plan to clear out a homeless camp. And they often have to contract out to a hazardous-materials removal company because of the dangers of needles and human waste.
Both Liu and representatives from the California Highway Patrol and Fresno police noted that if homeless people are removed from state property — like a highway underpass — they will migrate to city-owned property, like a sidewalk. When the city removes them, the people head back to state property, they said.

Liu said they have seen fewer volunteers to help a stretched-thin staff. Caltrans has 20 landscaping employees to cover 1,100 acres of space. That’s on top of two van-fulls of about 10 parolees assisting on projects, he said.
Caltrans once could get help from Adopt-a-Highway volunteers, but their numbers have decreased over time. He said it’s now easier for such companies to advertise online. A recent program that tapped into Fresno County employees ended because of problems with workers’ compensation, Liu said.
One idea discussed at the meeting that seemed to gain steam was asking Superior Court judges to select offenders to be “sentenced to Caltrans,” as Liu put it, as a form of community service. That would require collaboration with the court and district attorney’s office, the group agreed.
Another idea to help would be to hire temporary workers to assist the cleanup effort.
And littering is a problem, Liu said, especially at onramps and offramps. “People are lazy,” he said.

Meeting On, Off, On Again

Thursday’s gathering was originally going to be a special meeting of the city council. The clerk’s office posted the agenda before 9 a.m. Wednesday, just in time for the required 24-hour notice for a special meeting.
Less than seven hours later, the meeting was cancelled, at least in its official form. Arias, Bredefeld and council president Paul Caprioglio decided to meet with the stakeholders anyway in an open setting, with the media and public invited.
Why did it happen like this? When word of the meeting got around, other council members expressed interest in attending. State laws covering open meetings say if a majority of council members (in Fresno’s case, four) want to participate, it has to be an official meeting, properly agendized, with the public given prior notice.
Caprioglio’s chief of staff worked with the clerk to make the meeting official. However, when Caprioglio got word of this, he abruptly canceled the meeting. He said he would rather hold it in the unofficial setting, his office said.

After an hour, Arias wrapped up the meeting with an understanding there would be more. Caprioglio said he would like to include county stakeholders, including the Measure C committee — the board that administers the county-wide tax for transportation projects.
Representatives for Assemblyman Jim Patterson and state Sen. Andreas Borgeas, both of whom represent Fresno in Sacramento, agreed to do what they can to help. Borgeas already voiced his opinion on social media.

Despite the state taking in more taxpayer funds and a $20 billion surplus, state highways in and around Fresno continue to suffer neglect.

“We want to instill in our community to take pride in Fresno,” Bredefeld concluded.