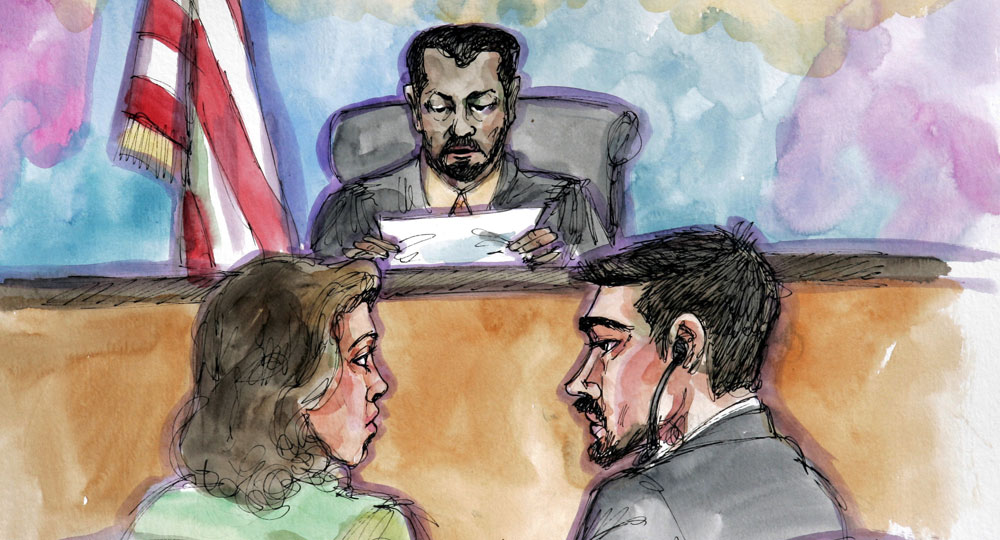 SACRAMENTO — A federal judge on Tuesday overturned the 2006 conviction of a Lodi man accused of plotting an attack in the United States after attending a terrorist training camp in Pakistan.
Federal prosecutors were reviewing the decision and did not immediately say whether they will seek to retry Hamid Hayat, a cherry picker from the community of Lodi in California’s Central Valley agricultural heartland, who has already served more than 14 years of his 24-year sentence for providing material support to terrorists and lying to FBI agents. They could also appeal U.S. District Judge Garland E. Burrell Jr.’s decision.
Burrell ruled that Hayat, now 36, was ineffectively represented by his inexperienced defense attorney.

Claims of a ‘Sleeper Cell’ in Lodi

Members of Hayat’s new legal team, led by the law firm of Riordan & Horgan, said they will seek his immediate release from the federal prison in Safford, Arizona, while he awaits any further action.
“Two federal judges have found credible the testimony of multiple witnesses that Hamid could not have committed the crimes of which he was accused. That is effectively a finding of actual innocence,” they said in a statement.
Investigators initially claimed five men were part of an al-Qaida “sleeper cell” in Lodi.
But only Hayat, who was born in California, was convicted of terror-related crimes. Three suspects were eventually deported without charges, while Hayat’s father, an ice cream truck driver, admitted to a customs violation after a jury was unable to reach a decision on whether he lied to federal agents about his son’s activities.

Burrell agreed with a magistrate judge’s recommendation that defense attorney Wazhma Mojaddidi failed to find alibi witnesses who would have testified that Hayat never had time to receive terror training while visiting relatives and getting married in his ancestral village in Pakistan.
She also should have provided a witness to testify that what prosecutors said was an incriminating note found in Hayat’s wallet was in fact a religious supplication commonly used by many Muslims, he ruled.
But Burrell rejected several other instances where U.S. Magistrate Judge Deborah Barnes found that Mojaddidi had erred.
Mojaddidi, an immigration and family law attorney who was trying her first criminal case, “appeared to independently and ably represent Hayat, and that representation did not appear tainted by a conflict of interest,” Burrell wrote.
Burrell presided over Hayat’s original trial and previously rejected a defense motion over whether Hayat was properly represented at trial. But he adopted Barnes’ finding that Mojaddidi’s failure to find alibi witnesses was particularly prejudicial.
Barnes heard six witnesses who testified that the longest Hayat was absent from his family’s ancestral village of Behboodi while visiting Pakistan with family members between 2003 and 2005 was one week. That directly contracted his purported confession to attending a training camp for three to six months.
“Hamid cannot get those 14 years of his life back, but we are relieved to see the case take such a big step forward,” Hayat’s family said in a statement distributed by the Sacramento Valley office of the Council on American-Islamic Relations.