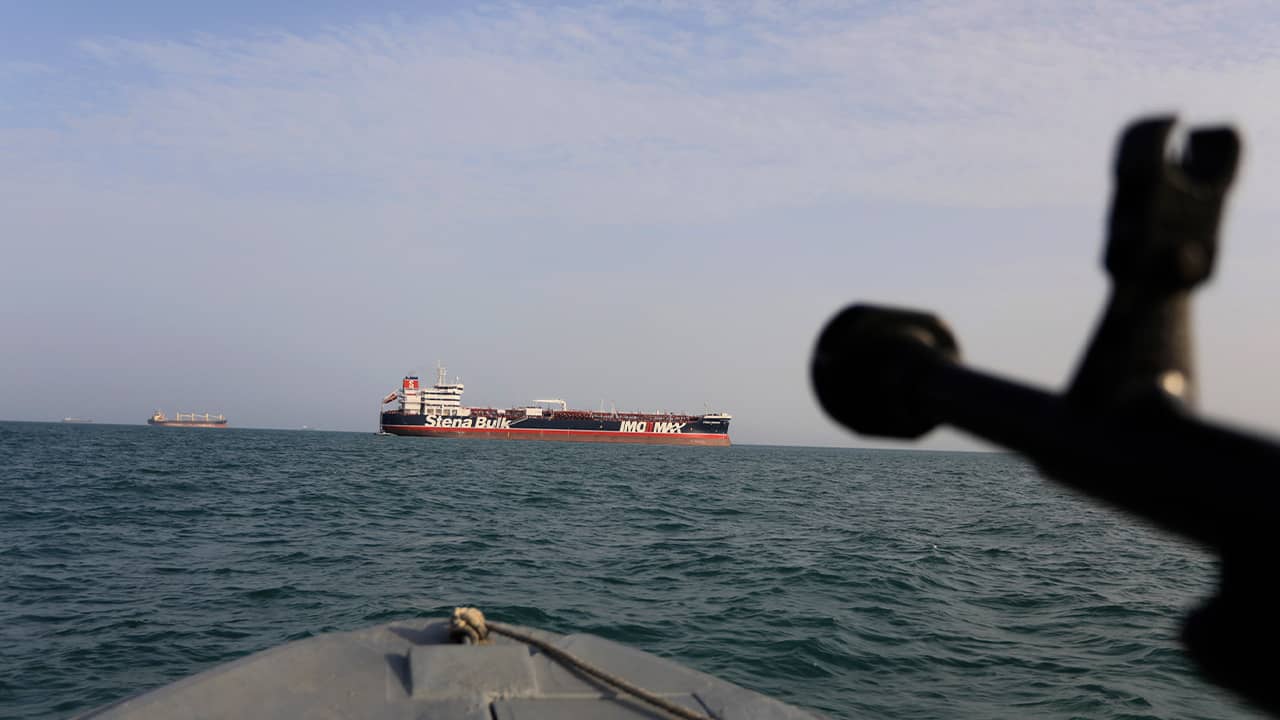 TEHRAN, Iran — In video released Monday, an Iranian Revolutionary Guard officer is heard telling a British warship not to interfere or put their “life in danger” as the paramilitary force, using speedboats and a helicopter, seized a U.K.-flagged commercial vessel in the Strait of Hormuz earlier this month.
The video includes a shot apparently filmed on the day of the July 19 incident from above the British warship Foxtrot 236 that was in the vicinity of the U.K.-flagged Stena Impero, showing the British navy unable to prevent Iran’s seizure of the ship in the critical waterway.
It also offers additional audio to that released by maritime security risk firm Dryad Global, which last week made public a portion of the exchange between the Foxtrot and the Iranian Guard during the incident.
The seizure of the Stena Impero further heightened tensions in the Strait of Hormuz, which lies between Iran and Oman. The narrow waterway is of critical importance to the world’s energy supplies because one-fifth of all global crude exports passes through the strait.

Audio Appears to Have Been Edited

Tensions there have soared following President Donald Trump’s decision last year to withdraw from Iran’s nuclear deal with world powers and impose sanctions on Iran that have targeted its oil exports, among other key industries.

The Guard had previously released video of the incident showing Iranian commandos in black ski masks and fatigues rappelling from a helicopter onto the Stena Impero.
This latest video and audio comes just days after the U.K. dispatched an additional warship to the region to accompany British-flagged ships passing through the Strait of Hormuz. Britain’s Ministry of Defense said the HMS Duncan will join the frigate HMS Montrose in the Persian Gulf to defend freedom of navigation until a diplomatic resolution is found to secure the key waterway.
Britain has figured prominently in rising U.S. tensions with Iran ever since British Royal Marines took part in the seizure of an Iranian oil tanker off Gibraltar, a British overseas territory. Officials there initially said the July 4 seizure happened on orders from the U.S. The U.K. says the tanker was suspected of violating sanctions on oil shipments to Syria.

Iranian officials, meanwhile, have alleged the Stena Impero was seized after it violated international maritime law by turning off its signaling for longer than is allowed and passing through the wrong channels. Iranian officials have also suggested the ship was seized in response to Britain’s role in impounding the Iranian supertanker two weeks earlier.
Both sides have called the interception of one another’s ships “hostile acts” and “piracy.”