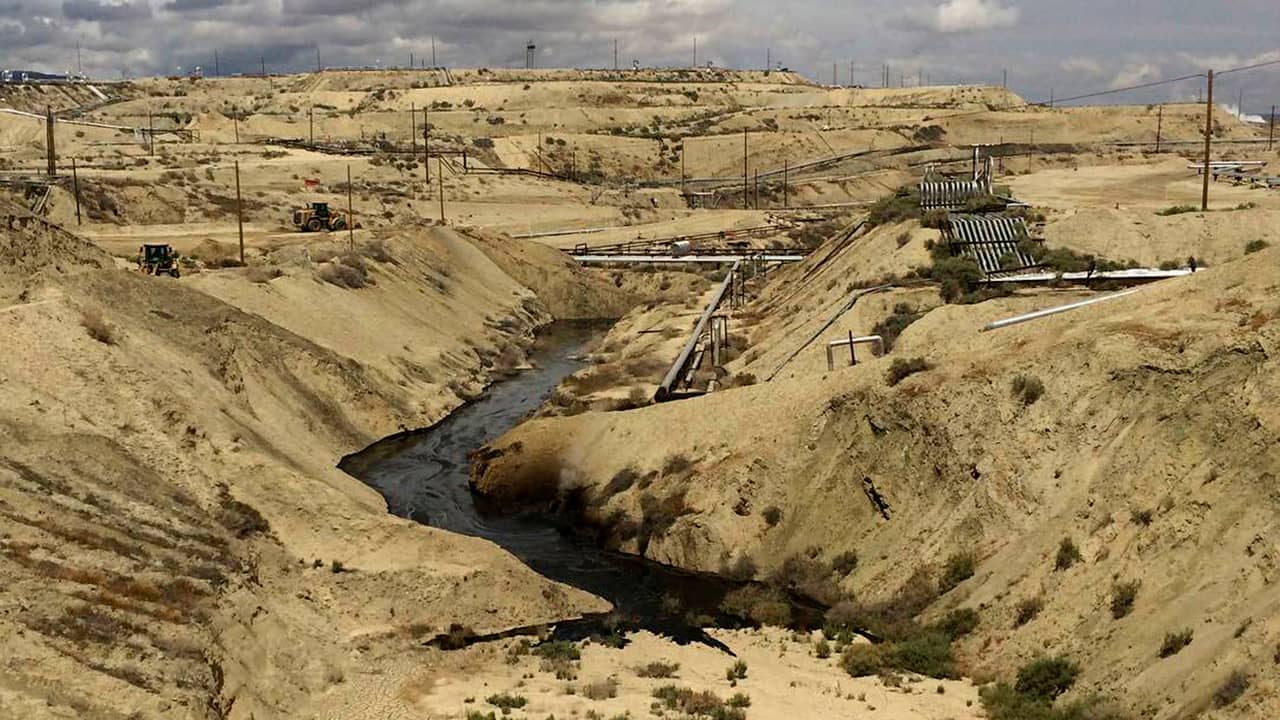 Gov. Gavin Newsom visited the site of California’s largest oil spill in decades and said he is encouraged by Chevron’s efforts to clean it up.
About 970,000 gallons have leaked from the ground at an oilfield west of Bakersfield over the last couple of months; about one third of it is oil and the other two thirds water.


About 970,000 gallons have leaked from the ground at an oilfield west of Bakersfield over the last couple of months.
“I’m seeing progress,” Newsom said during a visit Wednesday to the site, where the oil and water are contained in a dry desert creek bed. The leaks are known as surface expressions, which can be caused by injecting steam into the ground.
Chevron uses steam injection to extract oil in the Cymric Oil Field about 35 miles west of Bakersfield. The steam softens the thick crude so it can flow more readily. It is a different process from fracking, which breaks up underground layers of rock.

This is my first look at the Chevron oil spill in McKittrick (west Kern County)… Governor @GavinNewsom toured the sight this afternoon. State officials and the governor say the spill appears to be contained; they do not believe there is a threat to wildlife. pic.twitter.com/fQXAgvA53a

The company has said the initial leak began May 10 after its crews tried to seal a damaged and abandoned well. The company said efforts to confirm the source of the original leak and shut it down unleashed higher flows in the weeks after the initial release was discovered.

Spill is the Largest in California Since 1990

The state issued Chevron a notice of violation, ordering it to stop steam injections around the spill. The company also increased its production of oil from wells in the area. Both actions are intended to relieve underground pressure that may be forcing the mix of oil and water to the surface.
The latest seepage was noticed July 17.
The spill is the largest in California since 1990, when a tanker spilled more than 400,000 gallons of crude oil off the coast of Huntington Beach.
Officials said the latest spill is not affecting waterways. Still, Newsom told reporters the state would ask Chevron to turn over data so regulators can investigate the cause of the spill.
The Bakersfield Californian reported over the weekend that records show Chevron continued to inject steam into the ground at a site about 360 feet from where its crews were working on a well — a combination of activity that experts said probably contributed to the release. Chevron denied that steam played any role in the uncontrolled releases.