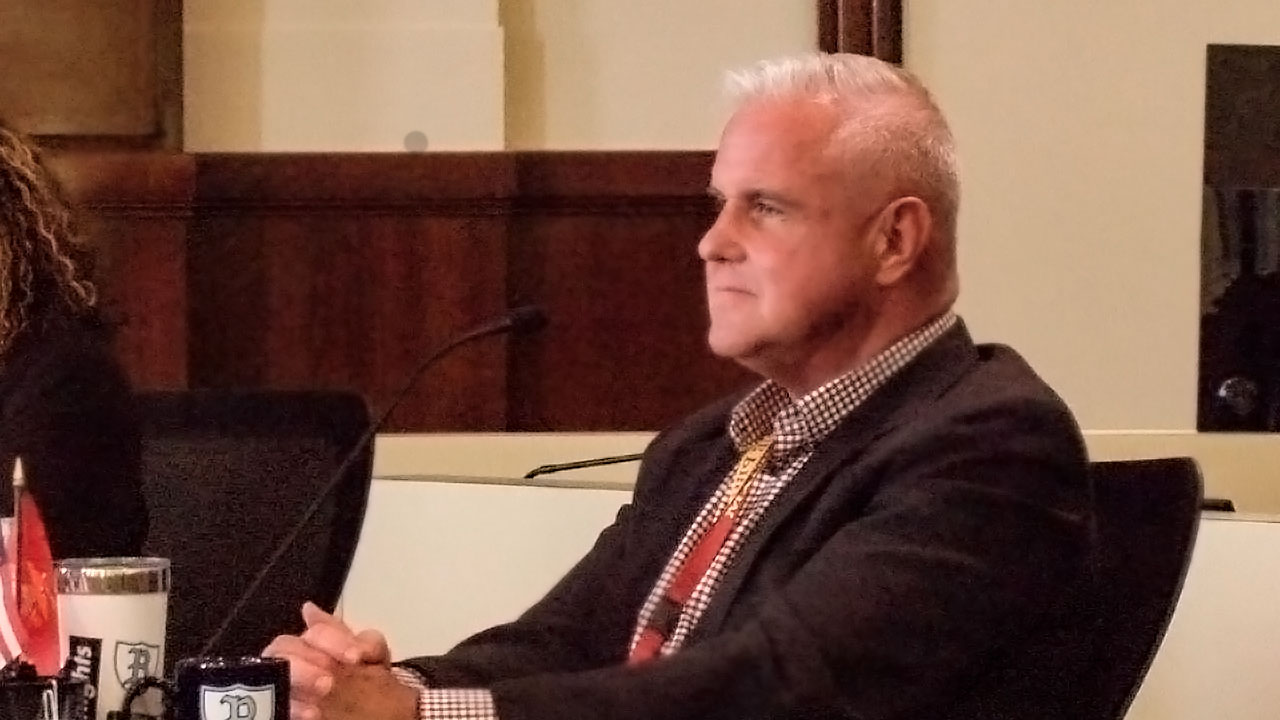 The results of two internal investigations into the controversial behavior of Fresno Unified trustee Terry Slatic soon will be made public, the school board’s president says.
Slatic, meanwhile, was defiant following a special board meeting Thursday called to consider disciplinary action against him.

Asked about calls for him to resign made by fellow trustees and others in attendance, Slatic said:
“No. Not in a million years. If the voters don’t want me here, I will happily go back into retirement. Because I came out of retirement to fix this dysfunctional school district.”
Board president Claudia Cazares said trustees voted in closed session Thursday to release the results of two district investigations.
One investigation involves a January incident between Slatic and an Army recruiter. The other examined Slatic’s interaction with staff, Cazares said.
The completion of the investigations means the board can move forward on forming a committee to consider a formal censure of Slatic, Cazares said.

The meeting was called to specifically discuss Slatic’s behavior at a recent meeting between the trustee and the Bullard High School cheer team.

“The meeting went exactly as I expected in every way, shape or form,” Slatic said after his colleagues voted 5-0 to limit his access to school campuses and to disapprove of his actions.
The theme of the meeting converged the two most recent controversies to engulf Bullard — a student donning blackface and using the n-word and subsequently being allowed back on the cheer team, and Slatic’s handling of the team meeting.

Many people who spoke Thursday said it wasn’t Slatic’s role to address the cheer team; he explained why he did.
“In consultations with the superintendent that day and the day before, we were both in agreement that somebody — the JV cheer squad conveyed to me (through emails) their practice went poorly and there was a lot of ‘neener, neener,’ to be brief, on these girls.
“(Superintendent) Bob (Nelson) and I decided somebody’s got to talk to these girls because they are not getting the message. … We are seven weeks into it at this point. This is an issue that if we had actual staff function around here, would have been gone in a week.”
Slatic said he and Nelson had met many times with the girls involved in the blackface incident, as well as the team. The two agreed that Slatic would handle the talk because he is the father of a former cheerleader and Nelson had another meeting July 10, Slatic said.

As to public perception of the cheerleader meeting, Slatic said they don’t have a complete picture of what happened: “I’m appalled that people have spent so little time understanding the facts of this case. Everyone wants to jump up and down and set their hair on fire.”
Slatic defended the way he spoke.
“Do they like the tone that I used? I would speak that way to my priest, or my grandmother. I spoke to the girls like they are elite athletes. As a cheer dad, I know they are elite athletes,” Slatic said.
Slatic noted that he did not use expletives and repeated policies found in the district’s cheer manual, particularly on limits to freedom of speech.
“Playing sports is a privilege, not a right,” he said.

Slatic’s only comments from the dais were about issues he wants to shine a light on. Afterward, he cited a fight covered up last month at Edison High with “racial overtones,” a 1.0 GPA requirement to graduate, and a “corrupt” lottery determining student selections for magnet schools.
“All the trustees said everything has to come out. And I’m going to hold them to that.”

Audio of Slatic’s Meeting with Cheerleaders

Cazares played audio recorded of Slatic’s meeting with the cheerleaders. Slatic said the recording was made without his knowledge, but later said he didn’t object to it being played publicly.
Here’s what the audience heard: