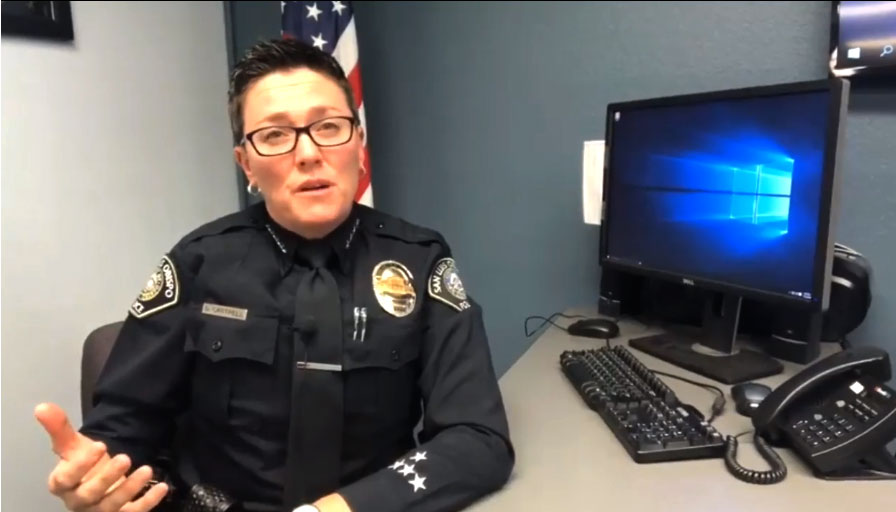 A gun left behind in at a restaurant by San Luis Obispo’s police chief has been returned, and a man admitted to pocketing the firearm after finding it in a bathroom, city authorities said.
On Wednesday night, a man who described himself as the suspect’s brother-in-law called the San Luis Obispo County Sheriff’s Office to say he had the gun. The man brought the firearm to the sheriff’s office in Los Osos, according to a statement from the San Luis Obispo city manager.
Police officers went to Los Osos to get the gun, then interviewed the suspect, who was identified as Skeeter Carlos Mangan, 30. Officers said Mangan admitted to finding the firearm, putting it in his pocket, then returning home.
It was unclear Thursday whether Mangan would face charges related to the incident.

She Went Back for Gun, But it Was Gone

The police chief, Deanna Cantrell, said she lost the gun about noon Wednesday after having lunch at an El Pollo Loco restaurant.
Cantrell posted a video on the police department’s Facebook page in which she apologized to the community. She offered no excuses for what happened, and said what she did was “irresponsible and careless.”

Cantrell said that after her meal, she entered the bathroom and removed the gun, which was holstered, because it wouldn’t remain clipped to her pants.
She realized the gun was gone minutes after leaving the bathroom, but when she returned it was gone.
“I talk about transparency and having a relationship that’s built on trust with our community, so I want to make sure I practice what I believe,” Cantrell says on the video.
According to security video at the restaurant, a man entered the bathroom minutes after Cantrell left it. Police posted an image of the suspect.

In a statement, San Luis Obispo City Manager Derek Johnson said he had spoken to Cantrell, who apologized to him and agreed to attend training on firearm safety.
“Having carried a firearm safely for 25 years, (Cantrell) is committed to serving as an example of the level of vigilance that must be maintained at all times, regardless of experience or rank,” Johson said in the statement.