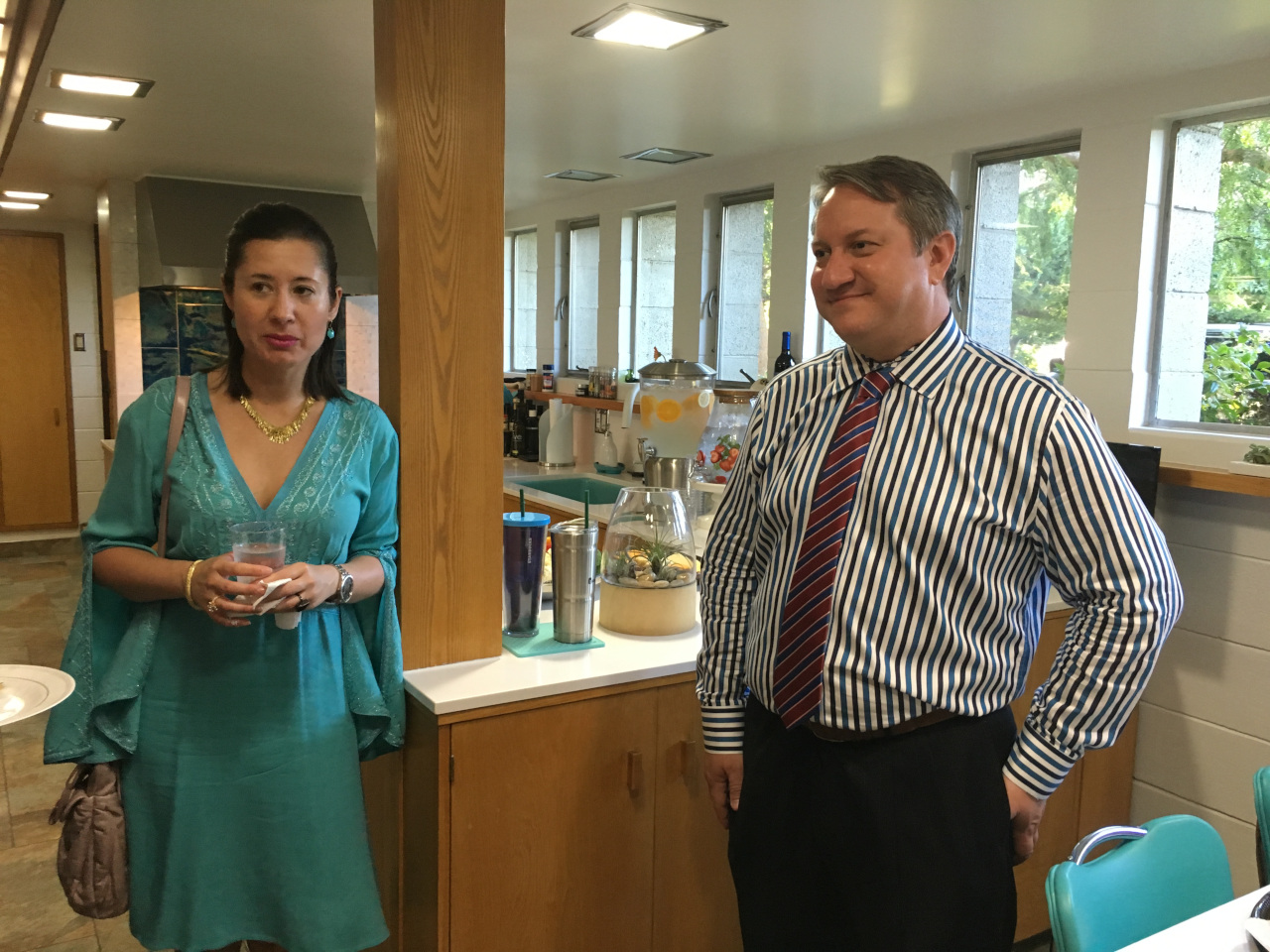 Jared Gordon knows he’s not close to the fundraising leaders among the candidates for the Fresno City Council special election next month.
Frankly, he’s not worried about it.

“I’ve intentionally prioritized focusing on going to community events and talking to voters before raising money. That’s really been the core of my campaign,” Gordon said.
Gordon held an intimate fundraiser Thursday at the home of his parents. His father, Dean Gordon, is a noted Fresno attorney, and a Democrat. Jared is a Republican.
“I always thought it was similar to one of my favorite TV shows as a kid, ‘Family Ties.’ I always have been a bit like Alex P. Keaton,” the younger Gordon said. The character played by Michael J. Fox was a conservative in a family of liberals.
Some familiar names from the city’s GOP establishment attended, including Fresno County Republican Party chairman Fred Vanderhoof.
Gordon hopes to add to the $25,000 he’s raised so far. That pales in comparison to candidates Karbassi ($139,000) and Garcia ($73,000).

He says his experience in civic engagement will give him the edge.
“Some of the other people in in the race are well intentioned, but they are newly involved in Fresno politics, newly involved in community affairs. I’ve been steeped in it,” Gordon said.
Regarding the city’s recently completed budget, Gordon supported Mayor Lee Brand’s use of the veto to ensure a balanced budget. That included removing money for the Advance Peace anti-gang initiative. A controversial part of the initiative was paying stipends of $300 to $1,000 to participants who had gang connections.
“Maybe that’s something that if they get more data and figure more things out about it that doesn’t include paying gang members, that’s something the council can revisit,” Gordon said.
The special election for the District 2 council seat, which represents northwest Fresno, is scheduled for Aug. 13.

Maybe gaffes are something vice presidents just do.
A lowlight reel of Joe Biden’s sillier remarks is only a YouTube search away.
Mike Pence added two more at a speech at a farm outside Lemoore this week.
First, he mispronounced the last name former congressman David Valadao, a man Pence described as a close, longtime personal friend with a bright future.

Then he stumbled on the name of the California city near the epicenter of two major earthquakes.
“And I also have a message to all the people across Rivercrest and all the affected areas,” Pence said.

He meant Ridgecrest, of course. He actually got it right on the first mention during his speech.
In the “It may be on Jeopardy!” department, Pence came out to “Hail, Columbia,” the official vice presidential theme music.

The Fresno County Grand Jury issued a split decision in a report on the Fresno First 5 program.
The grand jury investigated First 5 based on a citizen complaint. It released three reports looking into various governmental functions this week (the others dealt with elder care and Fresno’s 911 system).
The quasi-governmental organization appropriately spent funds when it built its $11 million Lighthouse building in downtown Fresno.
First 5 Executive Director Emilia Reyes said the grand jury report affirmed her group’s commitment to children.
“As stewards of public funds, our commission and staff are committed to invest in our early childhood system of care so that families have access to the community-based supports they need,” Reyes said in a response to the report. “The Lighthouse for Children stands as proof of this commitment and highlights the importance of supporting the first five years of life so that our children are ready for school and life.”
The grand jury also expressed concern about vacancies on the commission that is supposed to operate First 5.
A voter-passed state law established First 5 20 years ago. It allowed the county Board of Supervisors to establish the commission and appoint members to its board. Initially, there were to be nine board members — a mix of county officials and experts in the field of children’s health care and social services.
The county reduced the board from nine members to seven in 2014 because it couldn’t fill all positions. Even with seven, it couldn’t have a full board, operating with just five members.
“According to several interviewees, efforts made to recruit additional commissioners have been hindered in large part due to the stringent conflict of interest qualification,” the grand jury said.
That policy excluded many who should otherwise serve under state guidelines, the grand jury said.
Some commissioners didn’t meet qualifications set by those same guidelines, said the grand jury, which recommended supervisors complete their First 5 appointments by the end of the year, review the qualifications of all current commission members, and modify First 5’s conflict of interest policy.
“With regard to the makeup of our commission, I believe the current First 5 commissioners are deeply committed to the well-being of our county’s youngest children and we’ll stand by the county Board of Supervisors’ direction,” Reyes said.

State legislators will convene in Fresno on Monday to discuss California’s shortage of health care professionals.
The Senate Select Committee on the Social Determinants of Children’s Well-being meets at Fresno City Hall, Room 2165, at 10 a.m.
The committee will hear from at least seven speakers in health care and social services, including Sandra Celdon of Fresno Building Health Communities.
The committee is chaired by Sen. Holly Mitchell (D-Los Angeles). Sen. Melissa Hurtado (D-Sanger) also is on the committee and plans to attend.

Call it Plan B. Or is it C or D?
The Fresno County Board of Supervisors approved half million-dollar land purchase for an animal shelter on 2.8 acres of land on South West Avenue, not too far from the current location at the old county morgue.
An attempt to privately build a facility at a neighborhood near Grantland Avenue and Highway 99 is tied up in litigation.

Last year, the board approved zoning changes to allow Derrel Ridenour (of Derrel’s Mini-Storage fame) to build a new animal shelter. But concerned neighbors filed a lawsuit.
According to the most recent court documents, the parties “have made considerable progress in settlement discussions” and the next court action will take place in September.

A Night to Remember

Forgive the rerun, but this group could use your help:
The nonprofit group Honor Our Military Veterans is holding a July 18 gala to do exactly what the group’s name implies.
“A Night to Remember” will honor five World War II veterans. The event features music from Valerie Salcedo and The Gilly Girls, along with violinist Patrick Contreras.
The event will be at New Covenant Church, 1744 E. Nees Ave., starting at 6 p.m. Tickets are $30 (with discounts for children and veterans).