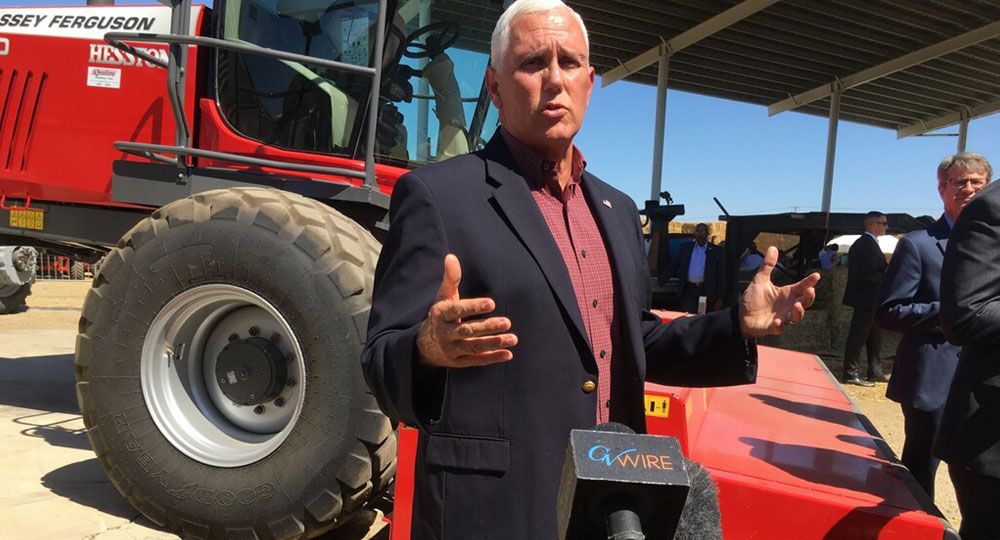 Vice President Mike Pence pulled off his tie, slapped on some boots, then stepped off Air Force Two on Wednesday and into a full morning and afternoon of events in the Valley, including a speech supporting the nation’s new trade agreement with Canada and Mexico.
Pence gave the remarks about the U.S.-Mexico-Canada Agreement at the Freitas Family Farm just outside Lemoore.
The crowd overflowed the farm’s pavilion, with some people sitting atop hay bales, shaded from afternoon heat that climbed into the 90s. The event was hosted by America First, which is President Donald Trump’s Super PAC.
The USMCA is designed to replace the North American Free Trade Agreement, or NAFTA. USMCA needs to be ratified by Congress.

“The president made it clear in the course of that campaign that he believed NAFTA had not served American workers and American jobs and American farmers,” Pence said. “Well, we promised to renegotiate that agreement and that we did.”
Pence said he had been traveling across the nation to promote the renegotiated trade agreement.
“I wanted to come here to California, here in the San Joaquin Valley, because you all understand the global impact of our agricultural economy and the need to have a trade deal here with our neighbors to the north and south,” Pence said. “It really puts American agriculture first. That’s exactly what we’ve done.
“I mean here in California, this great state already exports more than $48 billion in goods and services to Canada and Mexico alone. And under the USMCA, we know that number is going to grow.” 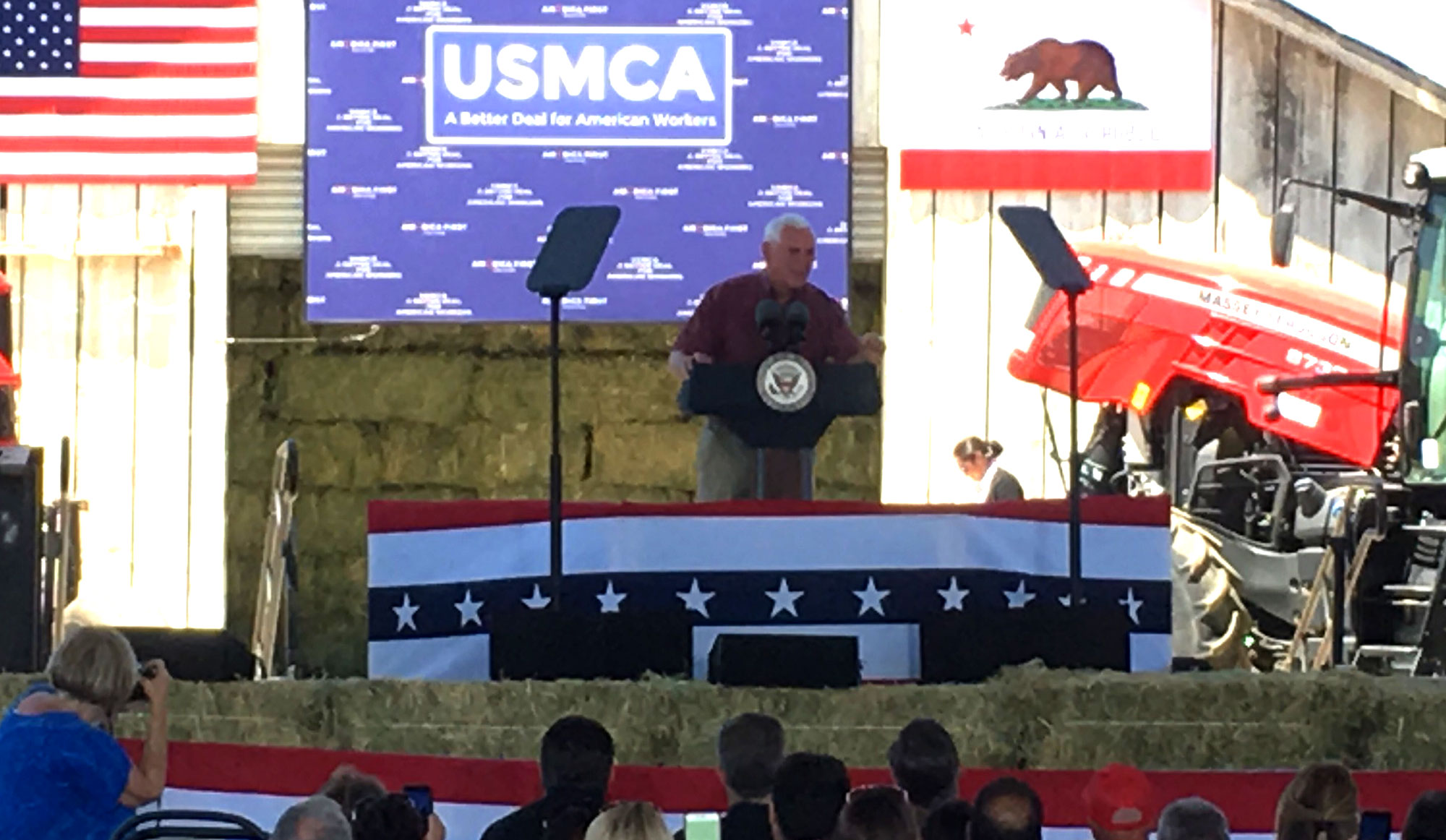 A Word for the Vice President’s Hosts

Pence said the USMCA would open up Canada to poultry producers for the sale of chicken and eggs, “along with expanded access for turkey.” That triggered a “woo!” of approval from someone in the crowd. “Somebody is excited about that,” Pence responded. “Making Thanksgiving plans over there.”
The vice president brought his hosts, the Frietas family, into the speech. “I know that Doug and Julie want to pass this extraordinary, third-generation farm on to (the next generation). Thanks to President Donald Trump and our supporters in the Congress, that’s going to be a whole lot easier because the president signed a tax cut that eliminated the death tax for nearly every family farmer in America.”
Pence concluded his remarks with Trump’s 2016 campaign slogan: “Make America great again.”

Crowd rises to its feet, waves hands during live rendition of “Proud to be an American.” Followed by USA chants. pic.twitter.com/WksQoRBjna

After the speech, Pence responded to a question about Gov. Gavin Newsom approved legislation this week that makes California the first state to offer taxpayer-funded health benefits to young adults living in the country illegally. Pence said the move only will serve to increase the flow of undocumented immigrants across the southern border.

The event at the Freitas farm was Pence’s only public appearance of the day, other than brief handshakes at Naval Air Station Lemoore, where the vice president’s plane touched down.

Before disembarking, Pence changed clothes, putting on a work shirt and boots more befitting of a visitor to the nation’s agricultural capital.
A crowd of about 75 was at the base when the Pence and his wife, Karen, arrived. He walked over and had some pictures taken. “Hey, Navy, how are ya?” he could be heard saying to one service member.
Pence then got into a black Suburban that rolled to the vice president’s first stop: Harris Inn Ranch in Coalinga, where he attended a fundraiser for Trump’s reelection campaign.

The pool reporter accompanying Pence, Josh Dawsey of The Washington Post, said that he wasn’t allowed to listen in on the vice president’s remarks at the Coalinga event.
However, an administration official said Pence addressed a crowd of more than 100 supporters on immigration and the border wall.
The official also said Pence expected to raise more than $1 million on his California swing.

Have You Seen This Classic '57 Chevy? It Was Stolen in Clovis