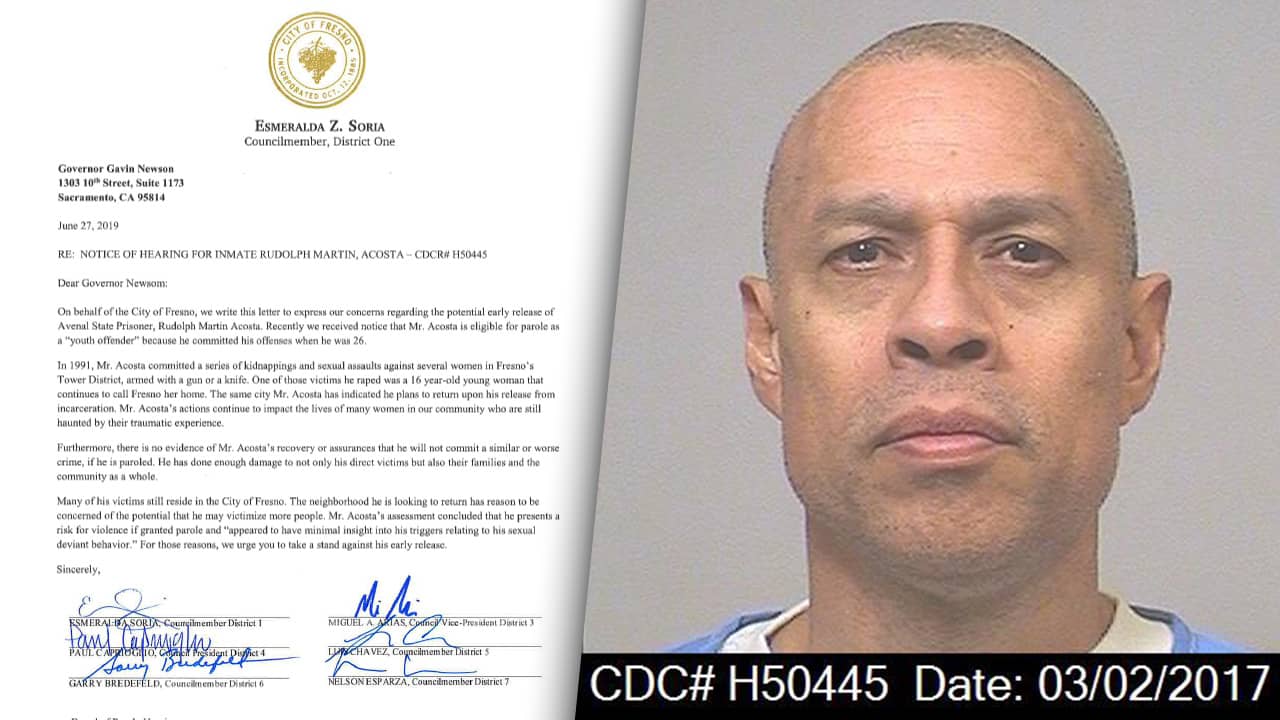 All six Fresno city council members signed a letter to Gov. Gavin Newsom, expressing concern about the potential early release of Rudolph Acosta.
As reported by others in the Fresno media, Acosta was known as the “Tower District Rapist” and sentenced to 78 years in prison. He was initially charged with 29 sex and robbery crimes. He began serving his time in 1992.

The council members noted that if released, Acosta plans to return to Fresno where many of victims still reside.
“We urge you to take a stand against his early release,” the letter states.
The parole board will hold a hearing for Acosta on July 30 at Avenal State Prison. According to the Board of Parole Hearings website, a two or three member panel will conduct the hearing, withe the board normally making its recommendation the same day.
[tnc-pdf-viewer-iframe file=”https://gvwire.s3.us-west-1.amazonaws.com/wp-content/uploads/2019/07/09011801/City-letter-to-governor.pdf” width=”800″ height=”700″ download=”true” print=”true” fullscreen=”true” share=”true” zoom=”true” open=”true” pagenav=”true” logo=”true” find=”true” current_view=”true” rotate=”true” handtool=”true” doc_prop=”true” toggle_menu=”true” language=”en-US” page=”” default_zoom=”auto” pagemode=””]

Arias Lets Circle K Have It

At last week’s Fresno council meeting, developers for convenience store chain Circle K gave a presentation outlining their plans for additional locations.
Councilman Paul Caprioglio praised the company for a Circle K in his east-central district.
Not everyone was equally enthused. Councilwoman Esmeralda Soria said the Circle K at Olive & Palm had generated 500 calls to police. Company representatives said they would work with the neighborhood to make any fixes.
Councilman Miguel Arias also took exception to concerns expressed by Circle K’s representatives about pending regulations restricting new liquor sale licenses in the city.

“(It) is frustrating to sit here and to spend time valuable time on the council hearing a corporate presentation on an item we fully vetted publicly months ago,” Miguel Arias said at the start of his four-minute attack.
Arias blasted them for Circle K’s complaints. He refuted their contention that buying an additional liquor license to operate a store is a financial hardship.
“Your current establishment is a blight and a nuisance to the Tower District. It has been for years,” Arias said of the Olive & Palm location. “If the small businesses in Fresno, that are family owned, can afford to maintain their properties, you shouldn’t have any trouble with it.”
Arias’ critique continued.
“You’re not and you haven’t been a good corporate citizen to the city of Fresno,” Arias said.
I can’t imagine Fresno’s business community being happy with those statements.
Nelson Esparza followed, with a more gentle criticism of Circle K.
“I don’t think any of here are begging Circle K to come into our district as the grand prize development,” Esparza said. He then joked that Caprioglio should be their commercial pitchman.
Maybe Arias and Esparza prefer shopping at AM/PM. The two recently joined their council colleagues in rejecting a liquor license for a proposed 7-Eleven near Roosevelt High. 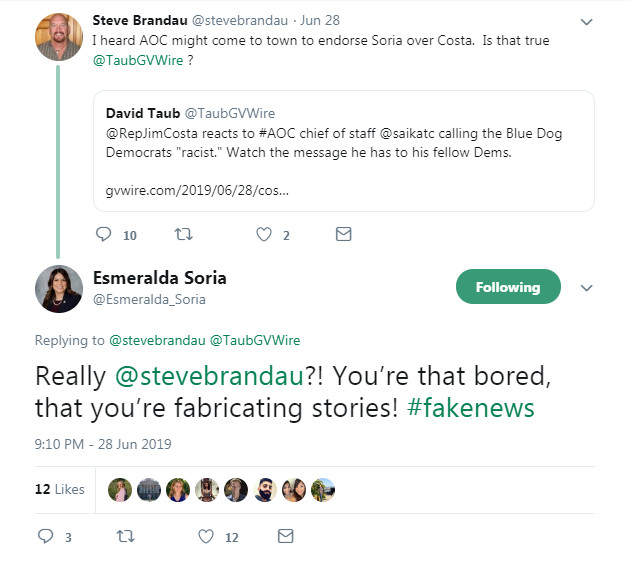 Fresno councilwoman Esmeralda Soria says she has made no plans regarding her political future. That hasn’t stopped the rumor mill spinning that she wants to run for Congress against fellow Democrat Jim Costa in 2020.
The latest turn came from one-time council colleague Steve Brandau, now a county supervisor. He floated the idea (heard previously by Politics 101 and just about anyone in this town who follows politics) on Twitter.
Soria says she did not meet with Emily’s List, a group that helps Democratic women run for office, when she recently visited Washington, D.C. The Sun’s Alex Tavlian has reported that she did.
For the record, Soria has not opened any federal fundraising committee.
Costa already has a pair of challengers, Republican and former educator Kevin Cookingham and Merced Democrat and educator Kim Williams.
The latest numbers (through the first quarter of 2019), show Costa with $121,000 cash on hand; Williams with none; and Cookingham yet to formally file financial reports.
Soria’s most recent financials from her 2018 city council reelection campaign show $113,000 cash on hand (through the end of 2018).

Trustee Saved By the Bell?

The Fresno Unified school board held a special meeting last Thursday (June 27) to ratify its labor contract with the teachers’ union.
According to video posted on the district website, the scheduled 8 a.m. meeting lasted only seven minutes. Five members showed up on time (Trustee Terry Slatic sat down just as the video started).
Trustee Elizabeth Jonasson Rosas showed up a minute later. Veva Islas was not there when the board approved the teachers’ contract, 6-0.
Islas then showed up at the literal last minute of the meeting, just in time to cast her vote to change wages and health benefits for management and other employees.  It passed 7-0.
Islas’ timing didn’t go unnoticed by former trustee Brooke Ashjian on Twitter.

The real question is how is it that FTA pumped almost 40k into Veva Islas Hooker and she can’t get out of bed to vote on the contract? Sad!!! https://t.co/xu8oZ3osnv

Islas on Twitter replied that “No one gave me 40K. The contract didn’t need my vote to pass because we had already reached an agreement,” and “The real question is why you voted against the contract when you were in office.”
She is partly correct. In her 2018 campaign, the PAC for the Fresno Teachers Association contributed $37,345.02.
I wonder if the trustees had tardy slips.
[Note: the above story has been corrected to reflect Islas missed one vote, but cast a vote on the second item at the meeting.]

The city of Clovis hasn’t raised the fee it charges new development for police services in 20 years. That’s about to change.
The council will vote Monday (July 1) to increase police fees from $100 to $726, or 647%. That is just one fee that will increase.
Charges for everything from water, sewer, and even bridges will go up for those who want to build new homes, apartments and commercial buildings. Parks fees will increase by 33% (which will be implemented over three years), and fire fees will rise by 28%.
The city estimates the average fee overall will increase up to 11% for residential projects. The actual increase depends on the acreage size.

Checks will be getting a little fatter for many Clovis municipal employees.
The city council on Monday (July 1) will vote for 2% yearly raises over the next three years for most management and other employees. The raises cover units representing engineers, public safety and many other positions.
The price tag to the budget — $3.6 million in raises over the next three years.