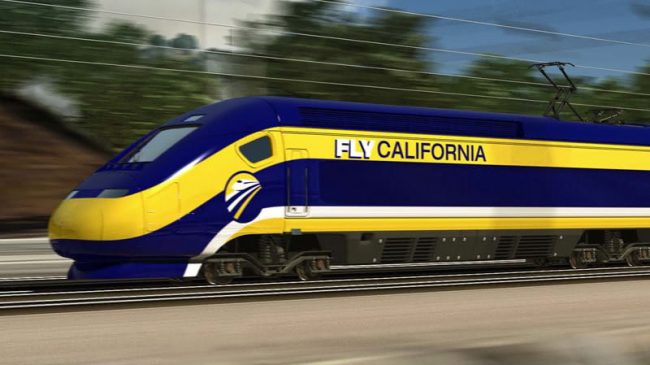 California has long been the leader in innovation, bold action and tackling projects that others wouldn’t dream of. The state highway system, BART, and the Golden Gate Bridge stand out as prime examples of challenging projects that were seen through, and today benefit millions. The vision for high-speed rail is no different. While I have been following the high-speed rail project at a high level for years, it is only recently, when I became chairman of the California High-Speed Rail Authority’s board of directors, that I became acutely aware of the benefits this project presents for the state of California.
High-speed rail at its core holds fundamental, economic and environmental promise for the hardworking men and women who call California home.
The Central Valley, where 119 miles are under active construction, is an area rich with roots and history. Growing up in Turlock, I can attest to the importance, economic benefit and attention high-speed rail is bringing to the Valley. I hear it each time I visit the region.
To hear some say this project is something that is not important to California is insulting. Ensuring we are all connected is essential to the California Dream. It always has been, and it always will be.

The authority has been in construction in the Central Valley since 2015, putting more than 2,600 men and women to work building the first 119 miles of high-speed rail. Bridges, viaducts, grade separations, and other civic works that will make up part of the Phase 1 system all are underway.
When voters in 2008 approved Proposition 1A, the bond measure that provided $9.95 billion to commence construction of a high-speed rail service connecting San Francisco to Los Angeles/Anaheim, they chose a transformative mobility option for themselves and for future generations.
In a state the size of California, high-speed rail service will make huge impacts. Travel times between the Bay Area and the Los Angeles Basin will be reduced from 12 hours by conventional rail, or seven to eight hours by car, to less than three hours by high-speed rail.
The service promises to link California’s major economic and population centers by connecting the cities of the Central Valley with the coastal regions of Northern and Southern California and beyond.
As the state rail plan laid out, high-speed rail will serve as the backbone for a larger, more integrated passenger rail network. These mobility options will allow Californians to move as they never have before.
The building block approach starting in the Central Valley makes sense.
This economic investment and connectivity is vital for the millions of Californians who call the Central Valley home. It’s the vision voters approved in 2008, and the mission to complete that vision remains unchanged.

High-Speed Rail Authority Must Live Within Its Means

While our federal partners have disengaged, this is not indicative of the past working relationship we’ve had with them. We remain committed to fighting what we believe to be an unwarranted attack on the state, and remain hopeful that at some point they will re-engage in what has historically been a positive partnership in large scale transportation projects.
While the federal disengagement is not ideal, the authority is moving forward. The recently released 2019 Project Update Report lays out the path to expand economic benefits while demonstrating the environmental and mobility benefits that high-speed rail can deliver, even in a constrained funding environment.
The analysis done by the authority’s Early Train Operator shows the best option for early interim service in the Central Valley is to develop a line between Merced, Fresno and Bakersfield, and provide faster travel and greater connectivity in and beyond that 171-mile stretch, with better connections for travelers to the Bay Area, Sacramento and the Los Angeles Basin.
The authority must live within its means. That means completing a segment it can fund with available revenue, and getting trains on the ground to show Californians what high-speed rail service in California can do.
The High-Speed Rail Authority will expand the entire system as envisioned, connecting a revitalized Central Valley to the Bay Area and Southern California as more funding becomes available.

Let’s Get on With It

This is the building block approach described in the 2018 Business Plan adopted by the authority one year ago.
To that end, the authority is investing nearly $1.4 billion in the corridor between San Francisco, San Jose and Merced. That includes completing environmental reviews and contributing $713 million to the Caltrain Electrification Project, with regional partners in high priority environmental reviews and early mobility projects to pave the way for future high-speed rail connections.
Concurrently, investments are being made in Southern California as well.
Over $1.2 billion in the L.A. Basin in concert with our regional partners is dedicated to complete environmental reviews from Bakersfield to Anaheim and high-priority bookend projects, including $441 million for Los Angeles Union Station improvements.
The authority continues to pursue the best option to begin early service in the only part of the state where we are under construction on truly high-speed rail assets — the Central Valley. This is the right thing to do because, candidly, it is time to get high-speed, electric trains operating in California.
Let’s get on with it.
About the Author
Lenny Mendonca is chairman of the California High-Speed Rail Authority board of directors, chief economic and business advisor to Gov. Gavin Newsom, and director of the Governor’s Office of Business and Economic Development (GO-Biz). He can be reached at lenny.mendonca@gobiz.ca.gov. He wrote this commentary for CALmatters, a public interest journalism venture committed to explaining how California’s Capitol works and why it matters.
Please see his past commentaries for CAlmatters here and here.