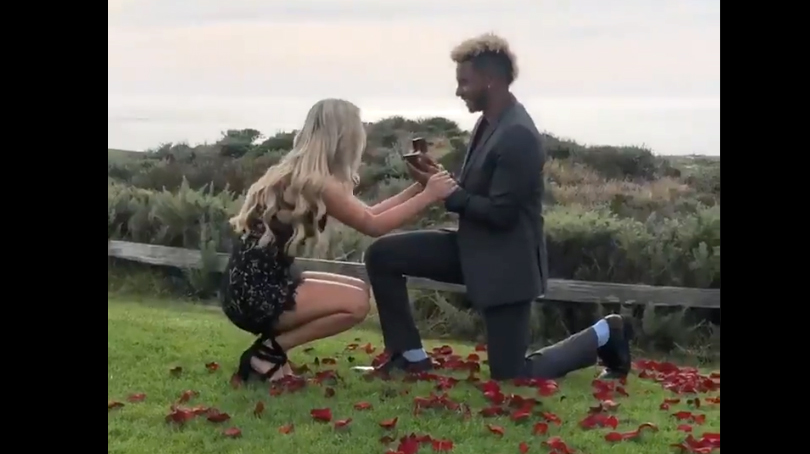 Marcus McMaryion, who led Fresno State to a Mountain West football championship six months ago, executed another perfect play last weekend — a surprise marriage proposal with a Pacific Ocean backdrop.
The former Bulldog quarterback chose a picturesque scene outside Roy’s at Pebble Beach restaurant, at the Spanish Bay resort. Roses were strewn on the grass where he took a knee and popped the question to girlfriend Chelsy Lunsford. In a tweet with a video that captures the moment, McMaryion wrote: “She said yes …”

Lunsford followed up with a tweet that gave her new fiance serious props for level of preparation.

Y’all get you a man that makes sure your nails are done, you’re dressed cute, a photographer is there AND wears socks w/ your face on them when he proposes https://t.co/BmN1c8cgD3

Lunsford and McMaryion both attended Dinuba High. And their relationship appears to have passed some important tests:

PSA: find someone you can see yourself raising a dog with pic.twitter.com/MHvdXNN03D

McMaryion logged two strong seasons at Fresno State after transferring from Oregon State. The Bulldogs went 22-6 in those two seasons, topped by 2018 campaign, which featured a heart-stopping overtime victory over Boise State for the Mountain West title and a 31-20 win over Arizona State in the Las Vegas Bowl. The Bulldogs finished with a 12-2 record.
NFL teams passed on drafting McMaryion in April, so he is trying to land a job as a free agent. In early May, he had tryouts with the Oakland Raiders and New Orleans Saints, but was not signed.