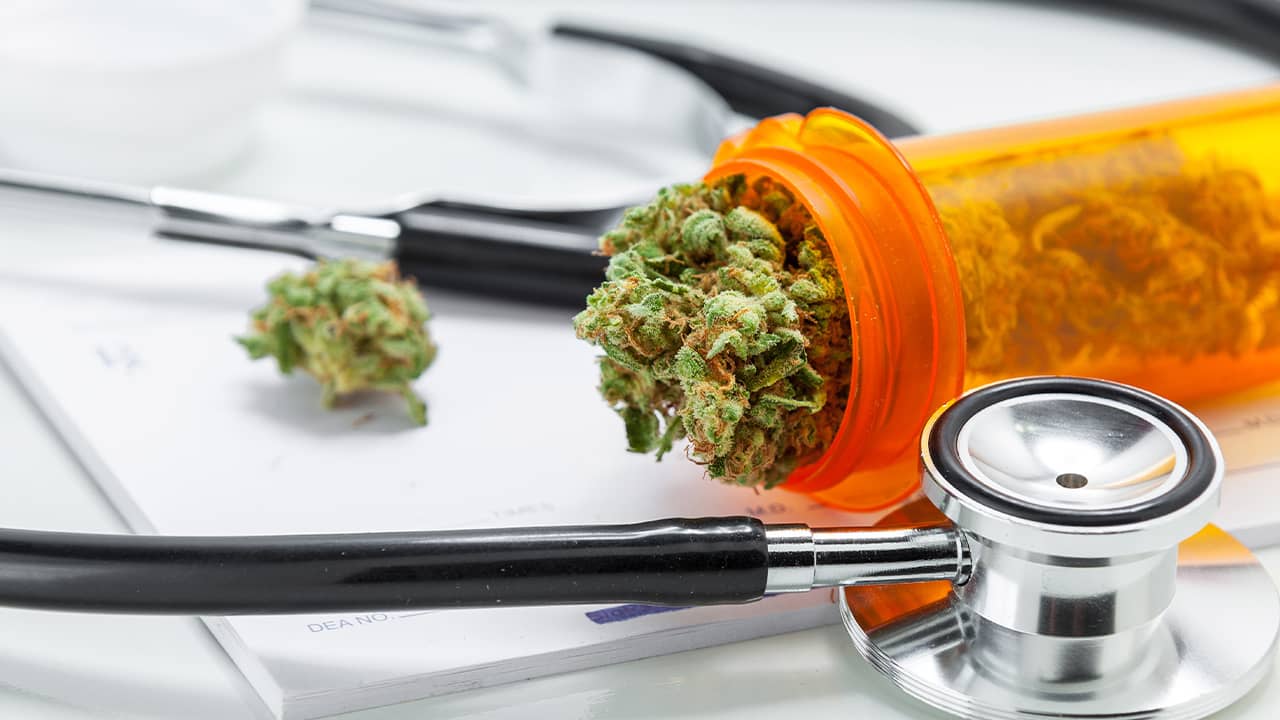 PORTLAND, Ore. — When states legalize pot for all adults, long-standing medical marijuana programs take a big hit, in some cases losing more than half their registered patients in just a few years, according to a data analysis by The Associated Press.
Much of the decline comes from consumers who, ill or not, got medical cards in their states because it was the only way to buy marijuana legally and then discarded them when broader legalization arrived. But for people who truly rely on marijuana to control ailments such as nausea or cancer pain, the arrival of so-called recreational cannabis can mean fewer and more expensive options.
Robin Beverett, a 47-year-old disabled Army veteran, said she resumed taking a powerful prescription mood stabilizer to control her anxiety and PTSD when the cost of her medical marijuana nearly tripled after California began general sales. Before last year, an eighth of an ounce of dry marijuana flower cost her $35. Now it’s approaching $100, Beverett said.
“It’s ridiculous. The prices are astronomical,” said Beverett, who moved to Sacramento from Texas because medical marijuana is illegal there. “Going to the dispensary is just out of the question if you’re on any kind of fixed income.”

It’s a paradox playing out nationwide as more states take the leap from care-centered medical programs to recreational models aligned with a multibillion-dollar global industry.
States see a “massive exodus” of medical patients when they legalize marijuana for all adults — and then, in many cases, the remaining ones struggle, said David Mangone, director of government affairs for Americans for Safe Access.
“Some of the products that these patients have relied on for consistency — and have used over and over for years — are disappearing off the shelves to market products that have a wider appeal,” he said.
Cost also rises, a problem that’s compounded because many of those who stay in medical programs are low-income and rely on Social Security disability, he said.

Ten States Have Both Medical and Recreational Markets

In Oregon, where the medical program shrank the most following recreational legalization, nearly two-thirds of patients gave up their medical cards, the AP found. As patients exited, the market followed: The number of medical-only retail shops fell from 400 to two, and hundreds of growers who contracted with individual patients to grow specific strains walked away.

In Alaska, the state with the second-biggest decline, medical cardholders dropped by 63% after recreational sales began in 2016, followed by Nevada with nearly 40% since 2017 and Colorado with 19% since 2014.
The largest of all the legal markets, California, doesn’t keep data on medical patients, but those who use it say their community has been in turmoil since recreational pot debuted last year. That’s partly because the state ended unlicensed cannabis cooperatives where patients shared their homegrown pot for free.
There is limited scientific data backing many of the health claims made by medical marijuana advocates, and the U.S. government still classifies cannabis in any form as a controlled substance like LSD and cocaine.
Still, the popularity of medical pot is rising as more states legalize it. There are 33 such states, including the politically conservative recent additions of Oklahoma and Utah. Oklahoma has among the more liberal guidelines for use and has approved more than 100,000 patient licenses since voters backed legalization last June.
Getting a precise nationwide count of medical patients is impossible because California, Washington and Maine don’t keep data. However, absent those states, the AP found at the end of last year nearly 1.4 million people were active patients in a medical marijuana program. The AP estimates if those states were added the number would increase by about 1 million. Retired seniors Kay Nelson, left, and Bryan Grode chat in the lobby of Bud and Bloom cannabis dispensary while waiting for a free shuttle to arrive in Santa Ana. Recent studies show that people 65 and over are the fastest-growing segment of cannabis users. (AP Photo/Jae C. Hong)

As more states legalize marijuana for all adults, some who have been using it medically are feeling disenfranchised.
In Michigan, where medical marijuana has been legal for over a decade, the creation of a new licensing system for medical dispensaries has sparked court challenges as the state prepares for the advent of general marijuana sales later this year. A cancer patient there filed a federal lawsuit this month, alleging the slow licensing pace has created a shortage of the products she needs to maintain her weight and control pain.
In Washington, medical patients feel they were pushed aside when that state merged its medical and general-use markets, which also is what’s happening in California.


“Patients have needs. Consumers have wants. Patients are in crisis right now.” — Anthony Taylor, medical marijuana advocate on Oregon Cannabis Commission
Los Angeles dispensary owner Jerred Kiloh sells medical and recreational marijuana and said those markets are quickly becoming one, since few companies are going to produce products for a vanishing group of customers. He said his medical business has dipped to 7% of overall sales and is dropping month to month.
“It’s going to be gone,” said Kiloh, president of the LA trade group United Cannabis Business Association.
In Oregon, regulators are struggling to find a path that preserves the state’s trailblazing low-cost medical pot program while tamping down on a still-thriving black market. A special state commission formed to oversee the market transition put out a report earlier this year that found affordability and lack of access are major hurdles for Oregon’s patients.
“Patients have needs. Consumers have wants,” said Anthony Taylor, a medical marijuana advocate who sits on the Oregon Cannabis Commission. “Patients are in crisis right now.”
General legalization has “indelibly changed the medical market,” and regulators want to identify the patients most affected by the transition, said Steve Marks, executive director of the Oregon Liquor Control Commission, which oversees Oregon’s recreational marijuana program.

Lawmakers just passed a bill that includes language that will allow the commission to explore a pilot program for home delivery of medical cannabis to patients in underserved areas, he said.
Meanwhile, Oregon U.S. Attorney Billy Williams has demanded lawmakers get control of excess weed being trafficked out of state and cited the medical industry as a potential source of illicit cannabis.
As a result, lawmakers are “paring the medical program back to what it probably should have been from the outset,” said Ben Pirie, a cannabis law attorney in Portland.
“There are patients with legitimate needs, but there are many more growing way more cannabis than needed to address those needs — and what do you do with that?” Pirie said, adding “there is this sweet spot in the middle that’s difficult to hit.”

Oregon law allows medical patients to shop tax-free at general-use stores, and recreational stores can sell medical pot, although those products comprise just 8.5% of their sales.
Meanwhile, the rules that came with general legalization put lower caps on the potency of edibles. That means medical customers often pay more for the same dose they got before broad legalization.
Medical cardholders, for example, used to buy gummies or chocolate bars infused with 400 mg of THC, the high-inducing element of cannabis. Now, edibles are capped at 100 mg for medical patients but cost the same or more.
“Who, with any medical condition, needs to be eating 20 pieces of candy a day?” asked Erich Berkovitz, Oregon’s last remaining state-licensed medical marijuana processor.

Patients can also grow a small number of plants, but that doesn’t address the needs of the many medical patients who don’t smoke and instead rely on marijuana-infused edibles or tinctures.