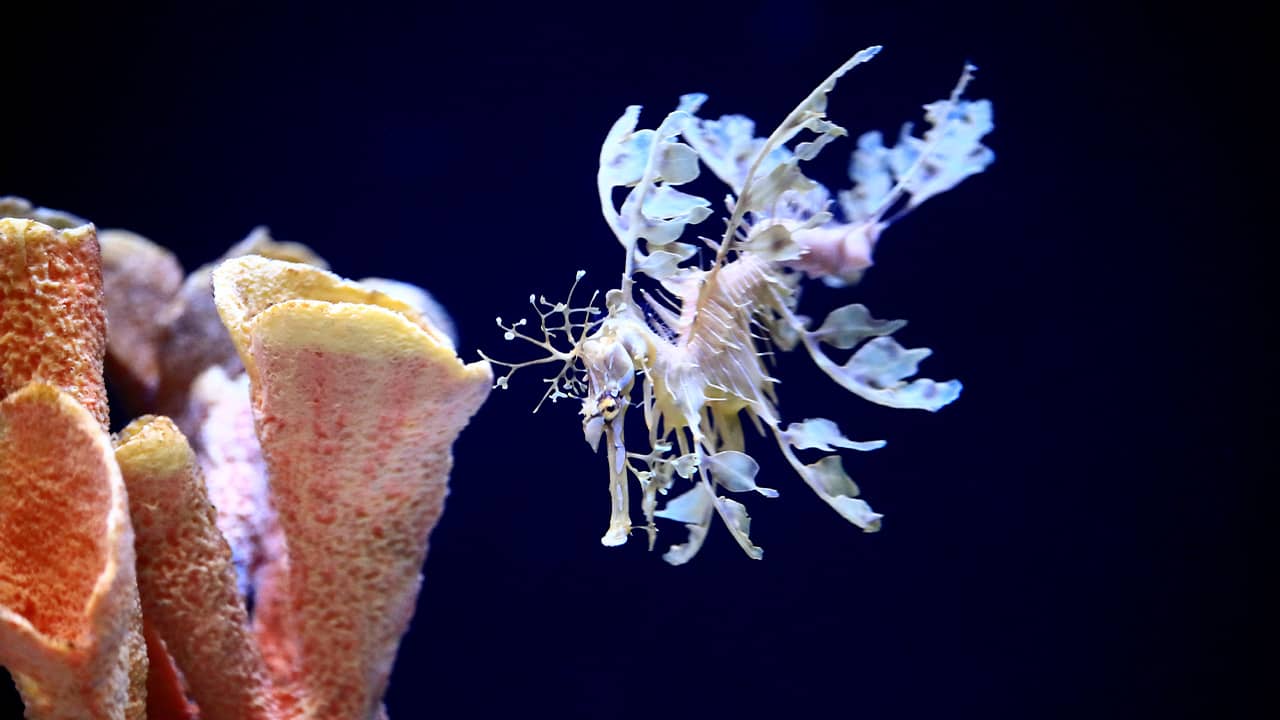 LA JOLLA — At first glance, it looks like a branch of kelp, but then an eye moves among its leafy appendages, and ridges of tiny, translucent fins start to flutter, sending the creature gliding through the water like something from a fairy tale.

“They look like something out of this world. When people see them move, you hear them say, ‘What? That’s alive? Wow! That’s crazy.'” — Steven Kowal, tourist

A Southern California aquarium has built what is believed to be one of the world’s largest habitats for the surreal sea dragons, whose native populations off Australia are threatened by pollution, warming oceans and the illegal pet and alternative medicine trades.

The Birch Aquarium at the Scripps Institution of Oceanography at the University of California San Diego hopes the exhibit, which opened this month, will lead to the leafy sea dragon, the lesser-known cousin of the seahorse, being bred for the first time in captivity.

“It literally just looked like a piece of kelp,” said Steven Kowal, 25, who was visiting San Diego from Greensboro, North Carolina, and took time to see the exhibit. “It was crazy to me that it was, like, actually living and swimming around, so that’s cool. I’ve never seen anything like that.”

“They look like something out of this world,” said Leslee Matsushige, the aquarium’s associate curator, who noted the sea dragons’ amazing ability to camouflage themselves. “When people see them move, you hear them say, ‘What? That’s alive? Wow! That’s crazy.'”

Little Is Known About Them Because Their Populations Are so Small

Scientists like Matsushige hope the creatures’ magnetic power will prompt people to read signs next to the tanks that outline ways to protect them and what can be done to make oceans healthier, such as picking up trash and stopping pollutants from going down the drain.

Few aquariums have sea dragons. There are only two types of sea dragons, the leafy and the weedy, each representing its own genus. Both are found only in a small area of temperate waters off the southern and western coasts of Australia.

Little is known about them because their populations are so small and in remote areas.

So far, only the weedy sea dragon, a bony fish that resembles seaweed when floating, has been bred in captivity, and only a handful of times.

The Aquarium of the Pacific in Long Beach was the first in the world to breed the weedy sea dragons in 2001. It also is trying to breed leafy sea dragons.

The Birch Aquarium’s 18-foot-long tank has three leafy sea dragons — two males and one female — and 11 weedy sea dragons. The 5,300-gallon tank is a vast space, especially for the smaller leafy sea dragon, which grows to only about 14 inches in length. The tank has grassy plants, a sandy bottom and rocks.

They Have No Natural Predators

Scientists hope the large space will foster breeding. Sea dragons mirror each other in a courtship dance, spiraling upward before the female deposits her eggs onto a patch on the underside of the male’s tail. Like seahorses, the male carries the young and gives birth.

“We’re already seeing great courtship behaviors, and so we’re hopeful we can get some egg transfers really soon.” — Jenn Nero Moffatt, director of animal care at the Birch Aquarium

“We’re already seeing great courtship behaviors, and so we’re hopeful we can get some egg transfers really soon,” said Jenn Nero Moffatt, director of animal care at the Birch Aquarium.

The exhibit is the latest effort by the aquarium that is a world leader in seahorse propagation.

Sea dragons swim by spinning translucent fins while their tails act as rudders. They have no natural predators, in part because their slender bodies are covered by bony plates.

If both types of sea dragons can be bred, scientists believe that could reduce the number being taken illegally from the wild.