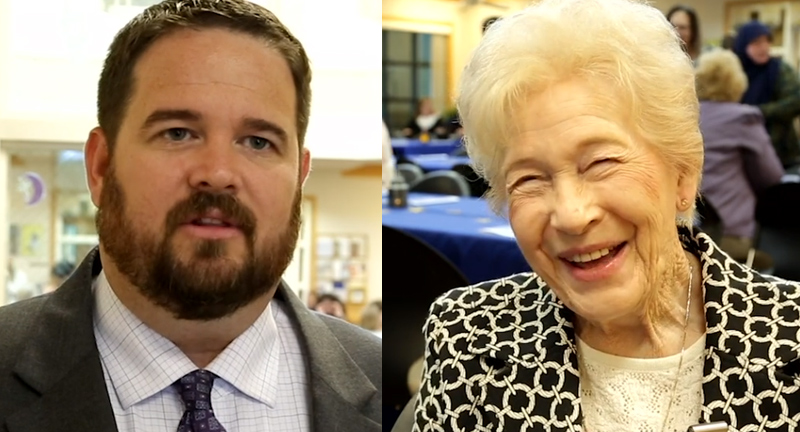 The Rev. Zach Darrah stood in the meeting hall of the Islamic Cultural Center of Fresno and smiled the biggest smile.

“I mean, we’re a Christian organization,” Darrah said of Fresno Interdenominational Christian Ministries, which he serves as executive director. “And they’re a Muslim organization. And we don’t have to hide that.  Here we are sharing a beautiful night of friendship together.”

The Spirit of Abraham Awards are given to people and organizations who significantly enhance interfaith cooperation and the understanding of Islam and Muslims in the central San Joaquin Valley.

Darrah’s organization, commonly known as FIRM, was one of two recipients of this year’s Spirit of Abraham Awards.  The other winner was Loretta Martin, longtime director of Clovis Funeral Chapel. The awards were presented at the Islamic Center’s “Night of Spirituality” gathering Friday night.

The Spirit of Abraham Awards have been presented every year since 2005. They are given to people and organizations who significantly enhance interfaith cooperation and the understanding of Islam and Muslims in the central San Joaquin Valley.  Past recipients include Fresno Police Chief Jerry Dyer, Dr. Sudarshan Kapoor, The Ethics Center at Fresno State, and Rabbi Rick Winer.

Reaching Out to Syrian Refugees

FIRM was recognized for its outreach to refugees from war-ravaged Syria. FIRM had spent years tending to the needs of Hmong, Laotian and Slavis refugee communities. The people and families from Syria was the first time the ministry worked with Muslim refugees.

Darrah said FIRM brought in people who could help bridge language and cultural barriers. From that point, FIRM did what it does every day: ensure people have proper food, clothing, and shelter, while addressing whatever other needs arise.

“We have to teach many of how to drive,” said Darrah. About 50 Syrian refugees earned driver’s licenses thanks to FIRM.

Martin and her late husband, Daniel, founded Clovis Funeral Chapel in 1976. About 25 years ago, she began working with the local Muslim community to facilitate funerals for loved ones. She learned about the rites of preparation, which include washing and shrouding the body. Reza Nekumanesh, director of the Islamic Cultural Center, said Martin has done an incredible job making families feel cared for and respected during a time of anguish.

“I have no idea in my wildest dreams,” Martin said of receiving the award. “I’ve so enjoyed working with these people.”

US Targets $300 Billion of Chinese Goods for New Tariff Hikes

After Two Years Away, Uber Returning to Fresno Airport