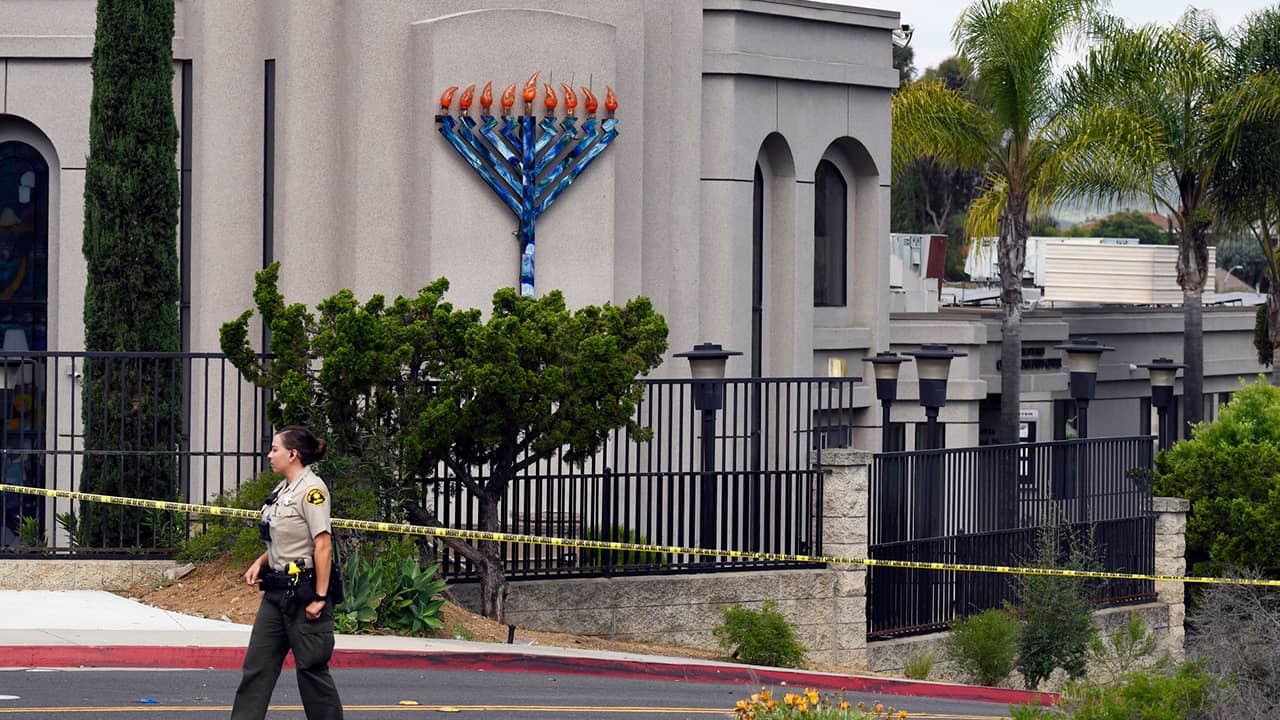 The Chabad of Poway synagogue applied for a federal grant to install gates and more secure doors to better protect that area. The $150,000 was approved in September but only got awarded in late March.

The shooter killed a woman and wounded an 8-year-old girl and two men — one of them the rabbi presiding at the service on the last day of Passover, a major Jewish holiday.

“Obviously we did not have a chance to start using the funds yet,” Rabbi Simcha Backman told The Associated Press.

Backman, who oversees security grants for the 207 Chabad institutions across California, declined to provide details on the planned security enhancements or to speculate whether they might have changed the outcome of Saturday’s attack.

The shooter killed a woman and wounded an 8-year-old girl and two men — one of them the rabbi presiding at the service on the last day of Passover, a major Jewish holiday.

Backman said the synagogue north of San Diego is considering asking authorities to allow some of the money be used to hire security guards, which it doesn’t have now.

After a gunman massacred 11 people at the Tree of Life synagogue in Pittsburgh last October, rabbis of California’s Chabad organization, including at the Poway synagogue, began asking members who were trained law enforcement professionals to carry their weapons at services, Backman said.

Gunman Has Pleaded Not Guilty to Murder Charges

The congregation also received training from the city of Poway on how to respond to an active shooter, and the rabbi applied for a concealed carry permit.

An off-duty Border Patrol agent fired at the gunman Saturday as he fled, hitting his vehicle. John T. Earnest, 19, has pleaded not guilty to murder and attempted murder charges.

Prosecutors have said he posted his “intent to harm Jews” online just ahead of the shooting and acknowledged starting a fire at a nearby mosque last month.

The synagogue, whose doors were open Saturday to welcome worshippers, was built two decades ago with some security features such as video surveillance, but it started to beef up its measures in 2010. Records show the synagogue received a $75,000 grant that year for security systems and alarms, a security assessment and installation of 16 cameras, fencing and lighting.

The synagogue applied for another grant in May 2018, and it was approved in September. It took until March 22 for the state to release the funds.

Backman said it often takes at least a year to complete the paperwork and necessary approvals, including state and federal officials signing off on any historical or environmental effects of the upgrades.

The security grant program is funded by the Federal Emergency Management Agency and administered in California by the state Office of Emergency Services. A sign asks for time to grieve at the Chabad of Poway synagogue in Poway. The gunman who attacked the synagogue last week fired his semi-automatic rifle at Passover worshippers after walking through the front entrance that synagogue leaders identified last year as needing improved security. The synagogue applied for a federal grant to better protect that area. The money, $150,000, was approved in September but only arrived in late March. “Obviously we did not have a chance to start using the funds yet,” Rabbi Scimcha Backman told The Associated Press. (AP File Photo/Gregory Bull)

While the synagogue got approval in September, a workshop on the required documents was not held until the end of October and the synagogue submitted its first documents in early February, Office of Emergency Services spokesman Brad Alexander said. The state then requested additional information before awarding the money.

“It seems like a long time from the time they granted to the authorization. I would like to find out if there’s a way we can speed this up, can we remove some bureaucratic steps here to help these organizations get these improvements done quicker?” — Sen. Brian Jones

“It seems like a long time from the time they granted to the authorization,” said Republican Sen. Brian Jones, whose district includes the synagogue. “I would like to find out if there’s a way we can speed this up, can we remove some bureaucratic steps here to help these organizations get these improvements done quicker?”

New FEMA rules allow the grants to be spent on security guards, and state officials said recipients of past grants can seek a modification to use the money that way, which Backman said the synagogue is considering. He added that the synagogue will find the funds to hire security guards if the government does not fund them.

With hate crimes against Jews and other religious and racial minorities growing, Gov. Gavin Newsom is backing a change in a similar state grant program that also would allow money to be spent on guards. He said institutions should decide whether those guards should be armed.

Poway synagogue Rabbi Yisroel Goldstein, who lost a finger in the shooting, has talked to Newsom, while the Chabad organization sent rabbis to Sacramento to push for funds to secure places of worship, Backman said.

Backman applauded Newsom’s announcement Monday about budgeting $15 million to increase security for religious institutions and other vulnerable nonprofits. Last year, the program got $500,000.

Layers of Security Most Effective

Jewish-affiliated organizations in California received 79% of the 264 nonprofit security grants awarded under the federal and state programs since 2012. The remaining 21% went to institutions serving other faiths, hospitals, Planned Parenthood chapters, domestic violence shelters, museums and a university.

Houses of worship, like all institutions that are open to the public, face a balancing act in providing security while maintaining a welcoming atmosphere, said Jesus Villahermosa, a former law enforcement officer in Washington state who teaches classes nationwide on deterring and reacting to active shooters.

“All the mechanical security in the world isn’t going to change that anyone in America can walk into any place in America and open fire,” he said. “It’s difficult, because I don’t think there is a perfect solution.”

Even installing metal detectors merely makes those gathered there the initial potential target, he said.

Villahermosa said synagogue leaders were wise to ask officers to bring their weapons and agreed with them about the danger of untrained people bringing weapons to services for fear they will shoot bystanders.

The best approach would be having layers of security, he said, including professional armed guards at entrances, embedded in the congregation and at the front of the worship area watching congregants.

Government help for that make sense with millions of Americans attending places of worship, Backman said.