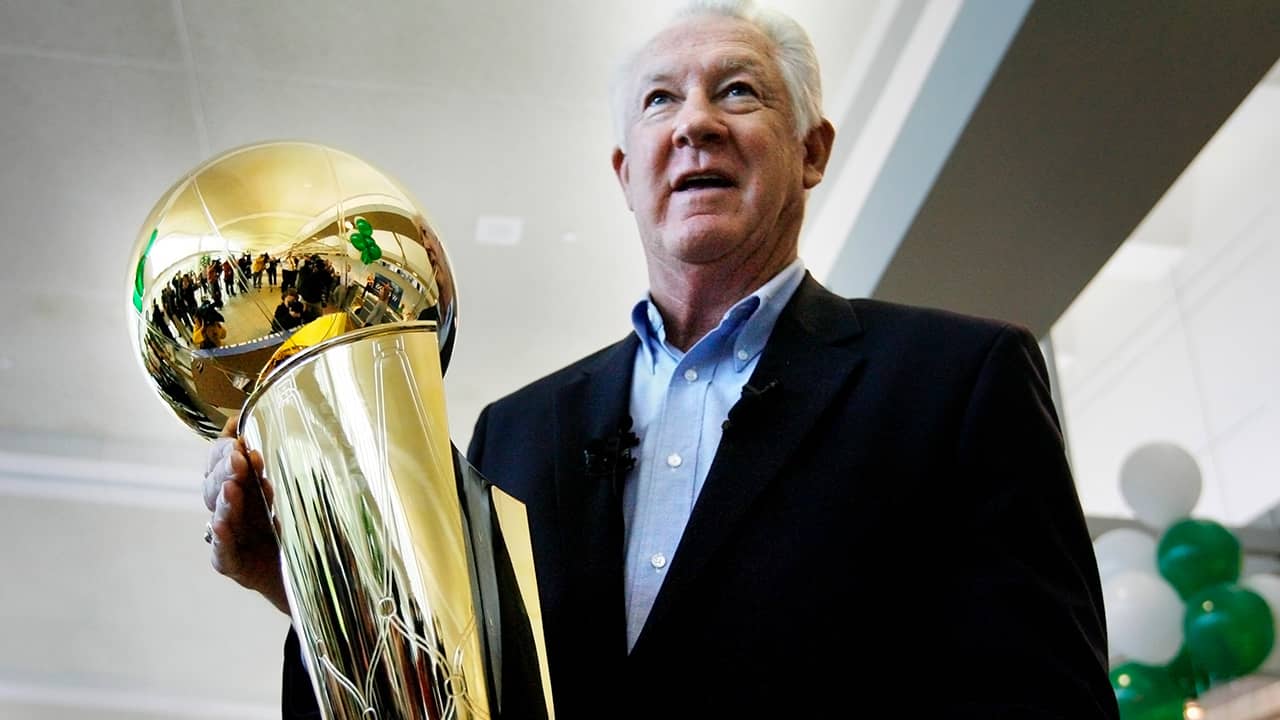 BOSTON — John Havlicek’s legacy was built over 16 years with the Boston Celtics, eight of them as NBA champions, making him among the best to ever play the game.
One play immortalized him forever:

“Havlicek stole the ball! “Havlicek stole the ball!” Celtics radio announcer Johnny Most screamed, a moment that remains among the famous plays in NBA history.
Havlicek died Thursday in Jupiter, Florida, the Celtics said. He was 79. The cause of death wasn’t immediately available. The Boston Globe said he had Parkinson’s disease.
Voted one of the NBA’s 50 greatest players, Havlicek won eight titles with Boston and his steal of Hal Greer’s inbounds pass helped the Celtics hold off Philadelphia in the 1965 Eastern Conference final. He entered the Naismith Memorial Basketball Hall of Fame in 1984.

“John Havlicek is one of the most accomplished players in Boston Celtics history, and the face of many of the franchise’s signature moments,” the Celtics said in a statement. “He was a champion in every sense, and as we join his family, friends, and fans in mourning his loss, we are thankful for all the joy and inspiration he brought to us.” Nicknamed “Hondo” for his resemblance to John Wayne, the 6-foot-5 Havlicek helped lead Ohio State to the 1960 national championship.
He was drafted ninth in the first round in 1962 by a Celtics team stocked with stars Bill Russell, Bob Cousy, K.C. Jones, Sam Jones, Tom Sanders, Tom Heinsohn and Frank Ramsey. Boston won championships in six of his first seven years.
“It is getting difficult each time I hear about another contemporary that passes!” Russell tweeted. “What is harder is when we lose guys like John Havlicek, he was not just a teammate & a great guy, but he was family. That is how our Celtics teams were.”
As Russell and others gradually moved on, Havlicek became the elder statesman and moved up to become a starter. The team won championships in 1973-74 and 1975-76 with Havlicek leading squads that included Dave Cowens and Jo Jo White.

Havlicek Was the MVP of the 1974 Finals

“John Havlicek was a wonderful friend who represented the best of the NBA,” NBA Commissioner Adam Silver said in a statement. “He described himself as a man of routine and discipline — a humble approach that produced extraordinary results.”
Havlicek was the MVP of the 1974 Finals, and set Celtics career records for points and games.
As much as his deadly jump shot or his play in Boston’s triple-overtime NBA Finals victory over Phoenix in 1976, Havlicek was known for his durability. In his NBA career he scored 26,395 points in 1,270 games and played in 13 All-Star Games.
“The Boston Celtics are not a team, they are a way of life,” Hall of Fame coach and executive Red Auerbach once said. And no one personified the Celtic way more than Havlicek.
His No. 17 was raised to the rafters in old Boston Garden and now resides in TD Garden, retired soon after he retired in 1978. He averaged 20.8 points, 6.3 rebounds and 4.8 assists in the regular season, and 22.0 points, 6.9 rebounds and 4.8 assists in 172 playoff games.
Bill Bradley recalled the fierce New York-Boston games when he and Havlicek would go at it. He called Havlicek the “quintessential Celtic — unselfish and loyal.” FILE – In this Jan. 8, 1970 file photo, Boston Celtics’ John Havlicek (17) protects the ball with his body from Atlanta Hawks’ Walt Hazzard (42) during an NBA basketball game in Boston. (AP File)

“For 10 years, John Havlicek was my toughest opponent in one of the biggest rivalries in the league,” the former Knicks star and New Jersey senator said in a statement. “Night after night, he was the epitome of constant motion. He only needed half a step to beat me, which he usually did.”

Havlicek Was Also an Outstanding Football and Baseball Player

Born April 8, 1940, in Martins Ferry, Ohio, Havlicek became a standout athlete at Bridgeport High School in the coal-mining town of 2,500 near Wheeling, West Virginia.
Havlicek was also an outstanding football and baseball player in high school and was given a tryout by the Cleveland Browns after graduating from college.
As a sophomore at Ohio State, he scored 12.2 points a game when the Buckeyes won the national championship, beating California 75-55 in the final. His junior and senior years, Ohio State again won the Big Ten titles and made it to the NCAA title game but lost to Cincinnati each time. During Havlicek’s three years at Ohio State, the Buckeyes went 78-6, dominating most games unlike any team up to that time.
All five starters from Ohio State’s title team in 1960 — which included Jerry Lucas and future Celtics teammate Larry Siegfried — played in the NBA. Backup Bob Knight went on to a Hall of Fame coaching career.
Havlicek remained in Boston after his retirement, managing investments. He later split time between New England and Florida. He occasionally returned to Ohio State for reunions of the championship team and Celtics events. His Ohio State number was retired during ceremonies in the 2004-2005 season.

Judge: Key Harvey Weinstein Hearing to Be Held in Secret