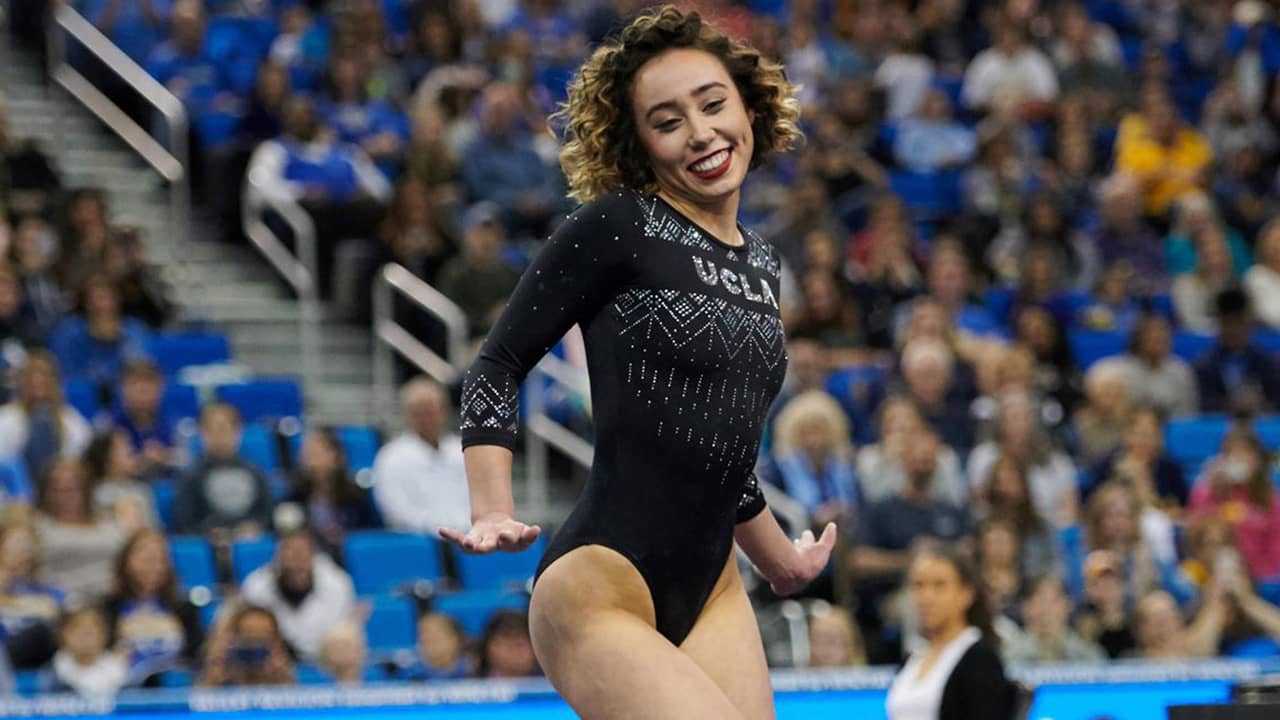 LOS ANGELES — Katelyn Ohashi wrote a poem called “Fame ” that ends “Not everyone’s destiny is going to be the same. Set your own goals and make your own fame.”
As the 22-year old UCLA senior gets ready to compete for the final time at the NCAA Championships, she has lived up to her own words with a trio of viral floor routines that have given her an audience outside the world of gymnastics and a platform to speak out on issues of empowerment. The meet begins Friday in Fort Worth, Texas.
Ohashi is ranked first nationally in floor exercise after recording a perfect 10.0 in six meets. She’s just the fourth gymnast in NCAA history to have a 10.0 national qualifying score on any event.
For as much attention as Ohashi gets on floor exercise, she is also ranked second nationally on the balance beam and leads a Bruins squad that is the defending national champion and has lost only one meet this season.
“I think I finally have really taken ownership of myself and me as a gymnast,” Ohashi said. “It just reminds you that timing is everything. I wouldn’t have been ready for all of this last year. I think this being my last year has set me up for a lot of the things I want to do in my future. I’ve always wanted to have a platform like this. So I think it’s really amazing.”
She is using that platform to try to spread a message of empowerment for women and to stand with survivors of abuse. It’s the theme of her new routine, a reworking of the one that earned her a perfect 10.0 in five of 10 meets and got more than 117 million views on social media, leading to appearances on national morning shows and acclaim from musicians, actors, athletes and politicians.

‘This Is a Dream Come True for a Coach’

The music for the new routine was selected by Ohashi, UCLA coach Valorie Kondos Field, Wieber and former UCLA gymnast Ariana Berlin. Berlin spliced it all together. It also features a higher degree of difficulty with extra flips on tumbling passes and more intricate choreography, which Ohashi delivers with an energetic flair and enthusiasm that draws roars and appreciative screams from the audience.
Kondos Field and Wieber felt the pressure going into this season of seeing whether Ohashi could live up to 2018, when she became the NCAA floor champion with a routine that had more than 90 million views. UCLA has had many floor routines go viral, but last year was the first time it was done by a junior.
“We’ve never had to top it so I knew it had to be more exciting and joyful,” Kondos Field said. “All the music that we were finding and that she was bringing to me was cool music. It was artistic. It was really great music, but it wasn’t joyful on a level greater than she had last year.”
Kondos Field, who is retiring at the end of the season, said the whole experience this year has made Ohashi a better person, student and teammate.
“This is a dream come true for a coach to see a student-athlete mature through celebrity,” she said. “She has been inundated with media requests and having to keep up with school and having to be a great team player and not being able to be late for work out. And she’s maneuvered everything so well like a pro.”
It wasn’t a dream beginning, however.
Before Ohashi arrived at UCLA in the fall of 2015, she competed for four years at the elite level and won the all-around competition at the America’s Cup in 2013. But that was her last major accomplishment on the elite stage as back and shoulder injuries derailed her Olympic hopes.

Ohashi Has Been Outspoken About Issues That Matter to Her

As bad as the physical injuries were, Ohashi was in worse shape mentally because of the pressures of competition and the coaches. Kondos Field and Ohashi went out to lunch regularly her freshman year. The discussions weren’t about routines, but about college life.
Kondos Field also challenged her to use all the time she spent on her phone more productively, like listening to TED talks.