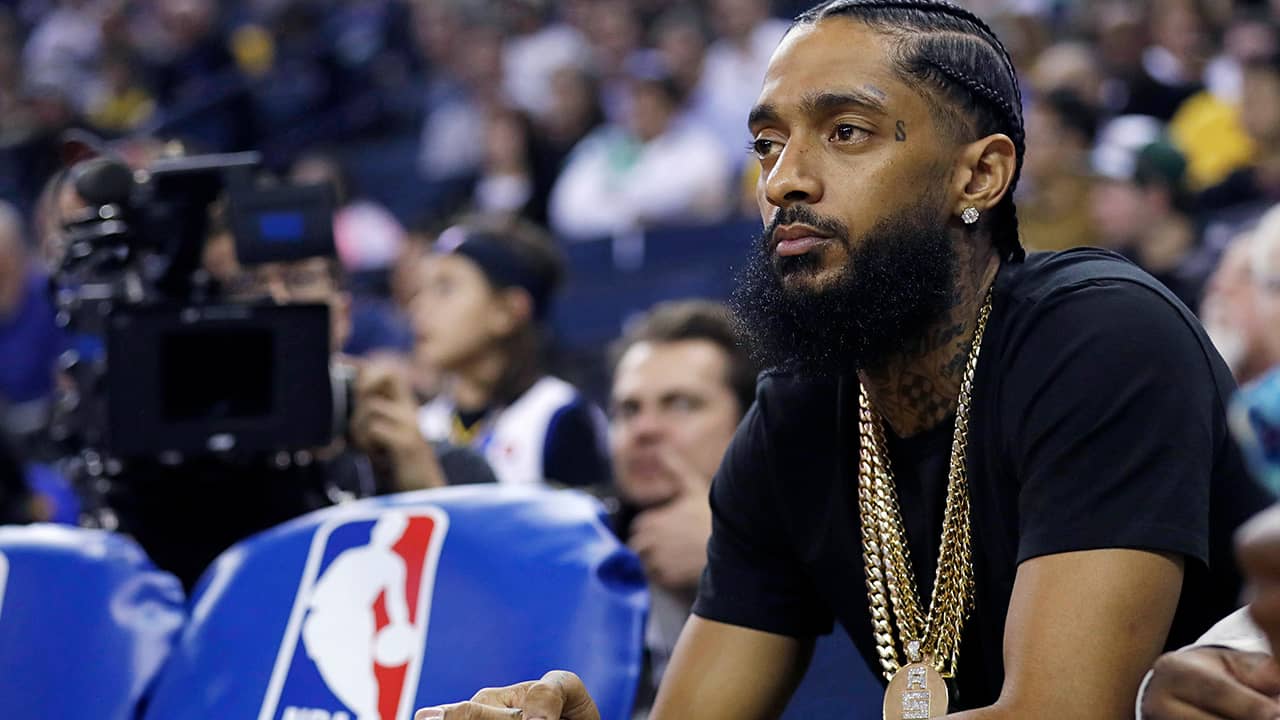 LOS ANGELES — Rapper Nipsey Hussle was fatally shot outside the clothing store he founded to help rebuild his troubled South Los Angeles neighborhood, police said, cutting short a career that earned him a Grammy nomination this year for his major-label debut. He was 33.
Police said Hussle was one of three men shot Sunday outside Marathon Clothing, his store in South Los Angeles; the other two were in stable condition. A large crowd gathered outside the store as night fell. Detectives were canvassing the area for witnesses and looking to see if any surveillance video captured the shooting, police Lt. Chris Ramirez said. Investigators had not yet determined a motive or identified any suspects, Ramirez said.
Mayor Eric Garcetti was among the many people expressing condolences.
“Our hearts are with the loved ones of Nipsey Hussle and everyone touched by this awful tragedy. L.A. is hurt deeply each time a young life is lost to senseless gun violence,” Garcetti tweeted.
Hussle, who had two children and was engaged to actress Lauren London, was an Eritrean-American whose real name was Ermias Asghedom.
“This doesn’t make any sense! My spirit is shaken by this!,” Rihanna wrote while posting photos of Hussle with his daughter and another with his fiance. “Dear God may His spirit Rest In Peace and May You grant divine comfort to all his loved ones! I’m so sorry this happened to you @nipseyhussle.”

This doesn’t make any sense! My spirit is shaken by this! Dear God may His spirit Rest In Peace and May You grant divine comfort to all his loved ones! 💔🙏🏿
I’m so sorry this happened to you @nipseyhussle pic.twitter.com/rKZ2agxm2a

Hussle was born on Aug. 15, 1985, in the same Crenshaw neighborhood where he died, and where he had been working to provide youths with alternatives to the hustling he did when he was younger.
Los Angeles Police Commissioner Steve Soboroff tweeted that he and Police Chief Michel Moore had agreed with Hussle to meet with him on Monday to “talk about ways he could help stop gang violence and help us help kids.”

Hussle released a number of successful mixtapes that he sold out of the trunk of his car, helping him create a buzz and gain respect from rap purists and his peers. In 2010 he placed on hip-hop magazine XXL’s “Freshman Class of 2010” — a coveted list for up-and-coming hip-hop acts — alongside J. Cole Big Sean, Wiz Khalifa and others.

Hussle Said He Wanted to Provide Hope and Motivation

Many celebrities were mourning his death on social media. NBA star Steph Curry tweeted, “God please cover and restore @NipseyHussle right now!!!”
Snoop Dogg posted a video of himself and Hussle together on Instagram, and posted a second clip sending prayers to the rapper’s family.

The. 2nd conversation me and. @nipseyhussle ever had and u ran with the game and. Created the marathon so proud of what u did ✌🏾there will be seeds of ya labor that will grow trust me 💙🙏🏽. Hussle 🕊🕊

“Prayers out to the whole family man. This (stuff has) got to stop man,” he said in the second video.
Rapper Nas mourned Hussle’s death on Instagram and wrote, “It’s dangerous to be an MC. Dangerous to be a b-ball player. It’s dangerous to have money. Dangerous To Be A Black Man… Nipsey is a True voice. He will never be silenced.”
Outside of music, Hussle said he wanted to provide hope and motivation to those who grew up in Crenshaw like him, and pay it forward. Forbes magazine reported in February that with business partner Dave Gross, the rapper had purchased the Crenshaw plaza where his Marathon Clothing store is located, and had plans to knock it down and “rebuild it as a six-story residential building atop a commercial plaza where a revamped Marathon store will be the anchor tenant.”
“Watching Nipsey inspired me to invest and own in our communities,” Emmy-nominated actress Issa Rae, also from Los Angeles, wrote on Twitter.
TV commentator Van Jones also tweeted, writing: “AWFUL. This brother was JUST getting started. He’d finally figured out how to use celebrity to build real wealth and opportunity in the hood. AND HE WAS DOING IT — FOR ALL OF US!!!”