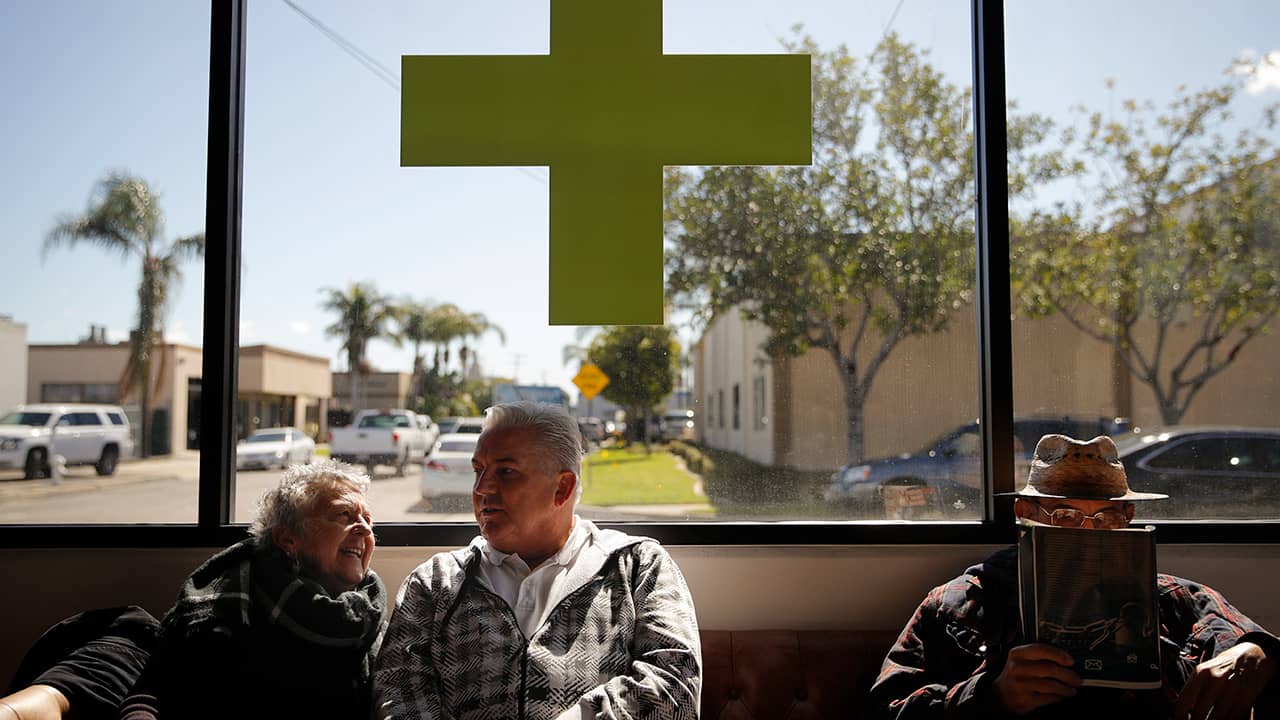 LAGUNA WOODS — The group of white-haired folks — some pushing walkers, others using canes — arrive right on time at the gates of Laguna Woods Village, an upscale retirement community in the picturesque hills that frame this Southern California suburb a few miles from Disneyland.

There they board a bus for a quick trip to a building that, save for the green Red Cross-style sign in the window, resembles a trendy coffee bar. The people, mostly in their 70s and 80s, pass the next several hours enjoying a light lunch, playing a few games of bingo and selecting their next month’s supply of cannabis-infused products.

“It’s like the ultimate senior experience,” laughs 76-year-old retired beauty products distributor Ron Atkin as he sits down to watch the bingo at the back of the Bud and Bloom marijuana dispensary in Santa Ana.

Most states now have legal medical marijuana, and 10 of them, including California, allow anyone 21 or older to use pot recreationally. The federal government still outlaws the drug even as acceptance increases. The 2018 General Social Survey, an annual sampling of Americans’ views, found a record 61 percent back legalization, and those 65 and older are increasingly supportive.

Indeed, many industry officials say the fastest-growing segment of their customer base is people like Atkin — aging baby boomers or even those a little older who are seeking to treat the aches and sleeplessness and other maladies of old age with the same herb that many of them once passed around at parties.

“I would say the average age of our customers is around 60, maybe even a little older,” said Kelty Richardson, a registered nurse with the Halos Health clinic in Boulder, Colorado, which provides medical examinations and sells physician-recommended cannabis through its online store.

Its medical director, Dr. Joseph Cohen, conducts “Cannabis 101” seminars at the nearby Balfour Senior Living community for residents who want to know which strains are best for easing arthritic pain or improving sleep.

Its medical director, Dr. Joseph Cohen, conducts “Cannabis 101” seminars at the nearby Balfour Senior Living community for residents who want to know which strains are best for easing arthritic pain or improving sleep.

Relatively little scientific study has verified the benefits of marijuana for specific problems. There’s evidence pot can relieve chronic pain in adults, according to a 2017 report from the National Academies of Sciences, Engineering and Medicine, but the study also concluded that the lack of scientific information poses a risk to public health.

At Bud and Bloom, winners of the bingo games take home new vape pens, but Atkin isn’t really there for that. He’s been coming regularly for two years to buy cannabis-infused chocolate bars and sublingual drops to treat his painful spinal stenosis since the prescription opiates he had been taking quit working.

It was “desperation” that brought him here, he said, adding that his doctors didn’t suggest he try medical marijuana. But they didn’t discourage him either.

The dispensary is filled with the 50 people from the bus as they peruse counters and coolers containing everything from gel caps to drops to cannabis-infused drinks, not to mention plenty of old-fashioned weed.

Adele Frascella, leaning on her cane, purchases a package of gummy candies she says helps keep her arthritic pain at bay. In this Feb. 19, 2019 photo, a vendor shows various cannabis products to retired seniors at Bud and Bloom cannabis dispensary in Santa Ana, Calif. More Americans in their 70s and 80s are adding marijuana use to their roster of senior activities. Recent studies show that people 65 and over are the fastest-growing segment of cannabis users. (AP Photo/Jae C. Hong)

Her Group Has Since Grown to More Than 1,000 Members

Fashionably dressed with sparkling silver earrings, Frascella confirms with a smile that she was a pot smoker in her younger days.

She took it up again a few years ago, even investing in a “volcano,” a pricey, high-tech version of the old-fashioned bong that Gizmodo calls “the ultimate stoner gadget.” But these days, like many other seniors, she prefers edibles to smoking.

Renee Lee, another baby boomer who smoked as a youth, got back into it more than a dozen years ago after the clinical psychologist underwent brain surgery and other medical procedures that she said had her taking “10 meds a day, four times a day.”

“And I wasn’t getting any better,” she said, adding that she asked her doctors if she might try medical marijuana as a last resort. They said go ahead and she found it ended her pain.

“We started with 20 people, and we kept it really quiet for about a year and a half,” she said, noting that although California legalized medical cannabis in 1996, it was still seen in some quarters as an outlaw drug.

Her group has since grown to more than 1,000 members and puts on regular events, including lectures by pro-cannabis doctors and nurses.

People Lee’s age — 65 and over — are the fastest-growing segment of the marijuana-using population, said Dr. Gary Small, professor of psychiatry and aging at the University of California, Los Angeles.

“We know that cannabis can cause side effects, particularly in older people. They can get dizzy. It can even impair memory if the dose is too high or new ingredients are wrong. And dizziness can lead to falls, which can be quite serious.” — Dr. Gary Small, professor of psychiatry and aging at the University of California

He believes more studies on the drug’s effects on older people are needed. And while it may improve quality of life by relieving pain, anxiety and other problems, he said, careless, unsupervised use can cause trouble.

“We know that cannabis can cause side effects, particularly in older people,” he said. “They can get dizzy. It can even impair memory if the dose is too high or new ingredients are wrong. And dizziness can lead to falls, which can be quite serious.”

Richardson said Colorado saw an uptick in hospital visits by older users soon after the state legalized cannabis in 2012. The problem, he said, was often caused by novices downing too many edibles.

That’s a lesson Dick Watts, 75, learned the hard way. The retired New Jersey roofing contractor who keeps a winter home at Laguna Woods Village began having trouble sleeping through the night as he got into his 70s. He attended a seniors’ seminar where he learned marijuana might help, so he got a cannabis-infused candy bar. He immediately ate the whole thing.

Now when he has trouble sleeping he takes just a small sliver of candy before bed. He said he wakes up clear-headed and refreshed.

“And I have it up on a shelf so my grandkids can’t get to it,” Watts said.