Recent stories published in this newspaper have uncovered cases of police misconduct that resulted in officers losing their jobs. These reports were part of an effort undertaken by many California newspapers, including this one, to obtain documents under the state’s new police transparency law, Senate Bill 1421.

The California Reporting Project has already made more than 1,100 requests from police agencies and other sources regarding individual officers.

The purpose of SB 1421 is to ensure law enforcement agencies release the disciplinary records of officers involved in shootings and other serious misconduct. The intention is not to demonize police, but to expose bad cops and the efforts to shield their behavior from the public they are sworn to protect.

Police unions have gone to court to fight the release of information, arguing that SB 1421 does not apply to records compiled before Jan. 1 when the new law took effect. They also say that releasing the documents could expose sensitive information that would endanger both officers and crime victims. Some police agencies went so far as to destroy old records before the new law took effect.

So far, however, the unions have had little success in keeping the records away from the public. The bill’s author, state Sen. Nancy Skinner, wrote it, she says, to be retroactive, applying to past as well as future records.

Before the new state law took effect, records showing what officers did to get fired or disciplined were secret from the public. But because of records released through SB 1421, the Santa Cruz Sentinel has made public three cases involving sexual misconduct.

— In Watsonville, two officers were fired, in 2014 and 2017 respectively, for repeatedly having sex with unidentified civilians while on duty — at least once in the front seat of a squad car and other times going to private residences while they were supposed to be working.

— In Santa Cruz, a former Police Officer’s Association president was accused of fondling four women in 2017. The officer, who was fired, faces four charges of sexual battery and if convicted would have to register as a sex offender for the rest of his life.

— In Capitola, a former police sergeant lost his position and right to bear weapons after an investigation into the officer’s exchange of hundreds of off-duty text messages with a female member of Police Explorers, who are between the ages of 14 and 20.

Before SB 1421, California was the strictest state in the country in protecting police confidentiality. That meant in the relatively few occasions where law enforcement uses its life-and-death powers inappropriately or illegally, records that document these instances have often been hidden from the public. And this erodes the relationship between police and the people they serve.

Since the bill became law, some law enforcement agencies — including the California Highway Patrol — have complied with the transparency provisions. But many agencies around the state continue to defy SB 1421. Journalists, however, have already obtained police misconduct reports that detail too many shocking crimes by rogue cops, including downloading child pornography, theft, shoplifting, embezzlement, domestic violence, dereliction of duty, and in one case, bank robbery.

But police unions vow to continue their efforts to keep this information secret, thus undermining the credibility of the vast majority of honest cops at a time when the use of force by law enforcement is being critically examined.

The unions are also opposing Assembly Bill 392, which would limit the circumstances for when police officers can use deadly force. The current law gives police an overly broad authority to kill. Law enforcement derailed a similar bill last year and this year, have proposed a bill of their own, Senate Bill 230, that would create new training programs for officers, but put no limits on when they can use deadly force. This bill clearly is an attempt to push back against meaningful reform.

Deadly force reform will be a challenge for legislators and Gov. Gavin Newsom, who will face intense pressure from the unions to accept their toothless proposal. We urge lawmakers and the unions to recognize these reforms are not threats to law enforcement, but instead opportunities for police to better serve the public and build trust with the communities they serve.

California voters decisively rejected Proposition 10 in November, wisely choosing not to invalidate a state law that bars local governments from imposing new types of rent control on single-family homes or apartments built after 1995. But to no one’s surprise, the state’s housing crisis is once again leading to a new push for rent control in the state Capitol.

Two troubling measures have emerged. Assemblyman Richard Bloom, D-Santa Monica, has introduced a bill that would dramatically weaken the current anti-rent control law by allowing cities and counties to control the rent on apartments and single-family homes that are more than 10 years old, although it would exempt landlords of small properties. Assemblyman David Chiu, D-San Francisco, has introduced a bill that would put a percentage ceiling on how much landlords could increase rent annually. He has not settled on a number yet. The bill would allow for increases for inflation.

But history shows rent control makes housing problems worse. Economists overwhelmingly agree that it reduces the quantity and quality of housing, and a study published last year by three Stanford academics found rent control in San Francisco led to a sharp decline in available units. The best and only answer to a housing shortage is more housing. 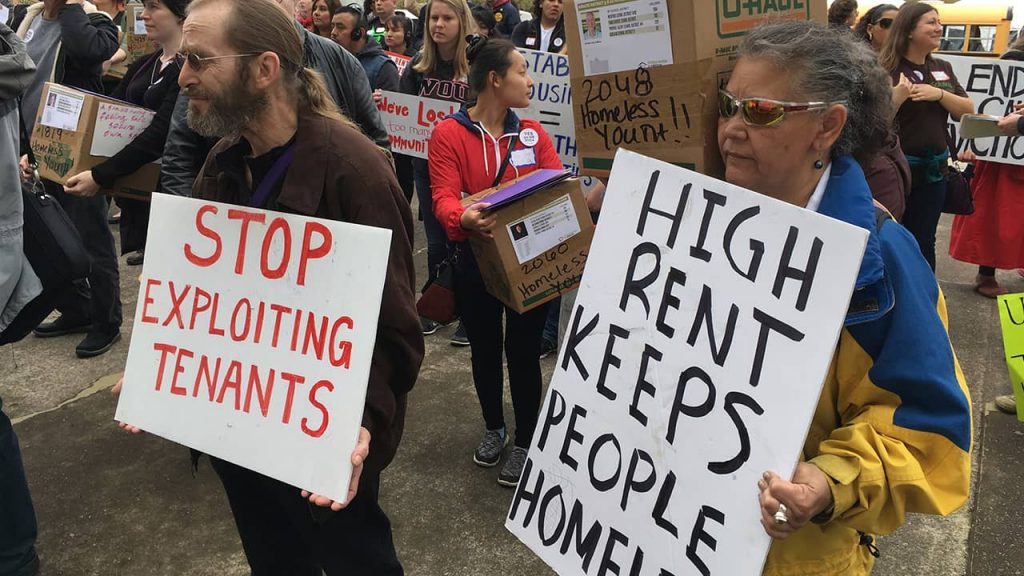 Oregon Gov. Kate Brown signed into law in February 2019 a bill that caps rent increases and bans no-cause evictions for many across Oregon, reshaping the state’s housing market for years to come. There is new legislation to expand rent control in California under consideration. (AP File)

The Sacramento Bee (March 13) on if Gov. Newsom can convince California to abolish the death penalty for good:

Gov. Gavin Newsom’s historic decision to impose a moratorium on the death penalty delivers on the bold change he promised during his campaign, whether or not you agree with it.

His decision will make many people unhappy. Some 53 percent of Californians voted against abolishing the death penalty in 2016. Yet Newsom’s unprecedented move also distinguishes him as a leader willing to be honest and forthright about one of society’s most challenging moral issues.

For years, Democratic leaders have stalled and delayed executions because the death penalty violates their moral consciences. Newsom’s refusing to play that game. Just three months into his administration, he’s saying exactly where he stands and has put himself on the hook for the political consequences.

“I do not believe that a civilized society can claim to be a leader in the world as long as its government continues to sanction the premeditated and discriminatory execution of its people,” Newsom said. “In short, the death penalty is inconsistent with our bedrock values and strikes at the very heart of what it means to be a Californian.”

“Our death penalty system has been — by any measure — a failure,” he added.

Newsom’s executive order, which halts all death penalty proceedings for the duration of his term in office, hinges on three main arguments:

— The death penalty kills innocent people. “Since 1973, 164 condemned prisoners nationwide, including five in California, have been freed from death row after they were found to have been wrongfully convicted.” While no evidence suggests California has executed any innocents, the governor’s office pointed to a 2014 study that estimated “at least one in 25 people would be exonerated” nationwide if they remained under death sentences “indefinitely.” ”The death penalty is absolute. Irreversible and irreparable in the event of human error,” Newsom said.

We have no doubt that Newsom’s executive order will be challenged in every way possible by death penalty supporters and political actors seeking a path to relevance. We also recognize the pain this decision will bring to the families and friends of those victimized by death row convicts. They may feel cheated out of justice. But current death row inmates will never set foot beyond prison walls.

The truth is California hasn’t really had a death penalty since 2006, when the state executed a 76-year-old legally blind diabetic in a wheelchair named Clarence Ray Allen. Since then, legal battles over whether the state can carry out the death penalty in a constitutional manner have ground what Supreme Court Justice Harry Blackmun called “the machinery of death” to a halt.

We commend Newsom for thinking boldly and acknowledge that his reasoning as outlined above is sound and in alignment with previous positions The Bee has taken on this matter. And we can’t help but wonder if this decision belongs to the people of California as much as it does to a single person. While we are engaged in a moratorium, will Newsom also consider a new referendum at the ballot box?

The idea would not be new to him: While campaigning for a measure to repeal the death penalty in 2016, he told The Modesto Bee Editorial Board he would “be accountable to the will of the voters,” if he were elected governor.

“I would not get my personal opinions in the way of the public’s right to make a determination of where they want to take us” on the death penalty, he said. 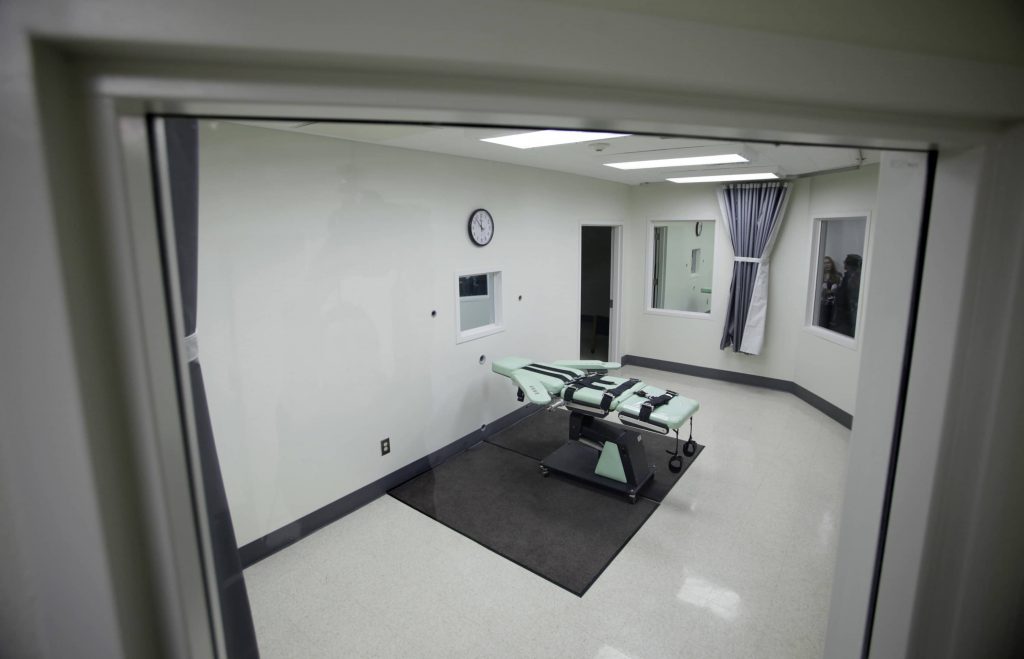