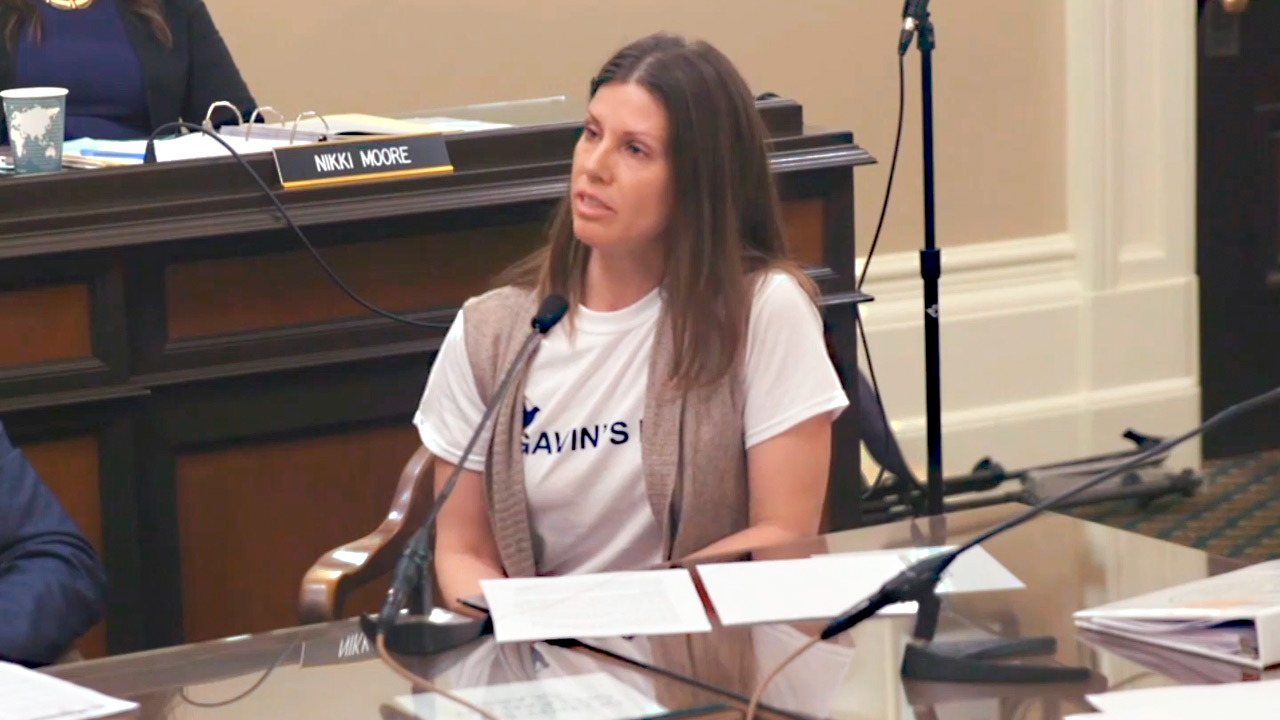 Gavin’s Law was headed for failure in the Democratically-controlled Assembly Public Safety Committee on Tuesday.

The law, authored by Assemblyman Jim Patterson (R-Fresno), would increase penalties for hit-and-run drivers who flee the scene. Patterson named AB 582 after Gavin Gladding, the Fort Washington Elementary School vice principal who died last September after being hit by a car while jogging on Friant Road.

“I’ve been on this committee for seven years. And, Mrs. Susan Gladding, you are the first witness that ever come before this committee that basically turned the committee through your compassionate, emotional testimony.” — Assembly Public Safety Committee Chair Reginald Jones-Sawyer (D-Los Angeles)

Then, Gavin’s widow, Susan, spoke. She brought the committee to tears talking about the loss of her husband to a suspected drunk driver.

Chairman Reginald Jones-Sawyer (D-Los Angeles) put it clearly by the end of the 40-minute hearing.

“I’ve been on this committee for seven years. And, Mrs. Susan Gladding, you are the first witness that ever come before this committee that basically turned the committee through your compassionate, emotional testimony,” Jones-Sawyer said.

“You’ve gotten some committee members into tears. … You’ve been the most powerful advocate for your cause, speaker that we ever had. And, I will tell you, you were very successful. Because I’m pretty certain, Mr. Patterson, we were at no to undecided for the majority of folks here.”

Technically, the bill failed to get out of committee. However, it did not receive any no votes. Patterson and the committee agreed to changes and to bring back the bill. Bottom line: It will likely receive the stamp of approval.

After Patterson introduced the bill, he turned the microphone over to Susan Gladding.

“My husband, best friend and father of my two children, Gavin Gladding, was stolen from us by a reckless driver,” she said, choking back tears.

She continued to describe the details of the case — how a driver killed her husband, fled, and tried to cover it up. She thanked a witness at the scene who called an ambulance and provided a description of the vehicle.

“There is a perverse loophole which encourages, actually rewards drivers to flee the scene of an accident, not to stay and help. By fleeing they can purposely avoid additional charges for hit-and-run and driving under the influence.” — Assemblyman Jim Patterson (R-Fresno)

Rogelio Alvarez Maravilla was sentenced to three years in prison after pleading no contest in the accident that killed Gladding. However, there was not enough evidence to show that he was drinking.

“September 16 and the weeks since have been a living nightmare for my family, who are all present today supporting AB 582. It’s been six months since that terrible day and we are still trying to make sense of the tragedy. But more importantly, the light sentence that the driver received, and that signals that it sends to your constituents …,” she said.

Gladding asked the committee to close the loophole that gives suspected DUI drivers a reason to leave the scene. The widow then talked about her husband and his love of education and public service.

“Gavin was extraordinary, passionate, funny and giving person — the kind of person you want to be around. He had 500 people that will claim him as his best friend. And, he was loved and respected by the thousands of students that he taught and mentored over the course of his 14 years in education.

Gladding’s testimony hit a chord with both supporters and opponents. Many of the scheduled speakers spoke briefly, struggling to regain their composure.

Randy Perry, with the law enforcement advocacy group PORAC, was left speechless and in tears. All he could muster was that his group supported the bill.

Margo George, with the California Public Defenders Association, expressed worry that doubling the sentence for a hit-and-run would increase incarceration, which she said would be ineffective.

Kathy Sher, of the ACLU Northern California, told the committee that the bill could tie the judges’ hands in issuing a sentence that might not be appropriate.

Sixteen family and friends of the Gladding family spoke in support of the bill. No other opponents spoke.

Patterson faced an uphill battle trying to convince the committee, 75% of them Democrats, to support a bill that would increase penalties on crime.

“I’m a mother of a 2-year old. My husband and my family are everything to me. I can only imagine.” — Assemblywoman Buffy Wicks (D-Oakland)

“There is a perverse loophole which encourages, actually rewards drivers to flee the scene of an accident, not to stay and help. By fleeing they can purposely avoid additional charges for hit-and-run and driving under the influence,” Patterson told the committee in his opening statement.

Assemblyman Bill Quirk (D-Hayward) expressed shock that such a loophole existed. He wished for more time to sort it out.

Other members, Rebecca Bauer-Kahan (D-Orinda) and Sydney Kamlager-Dove (D-Los Angeles) were concerned that increasing the minimum penalty from two years to four years would be too much — especially if they were not driving under the influence.

However, neither wanted to let the discrepancy of a lesser penalty for a DUI driver fleeing the scene go. They said they were willing to support an amendment that would allow more discretion in sentencing.

Assemblywoman Buffy Wicks (D-Oakland) could barely speak. “I’m a mother of a 2-year old. My husband and my family are everything to me. I can only imagine,” she told Gladding.

Jones-Sawyer noted there are other reasons to flee a scene, including immigration status. He offered a compromise. The committee would not pass the bill today. But, he vowed to reconsider a revised bill to address concerns about sentencing, while still closing the loophole.

“I guarantee you, it will be by acclamation,” Jones-Sawyer said.

“I know where your hearts are and you demonstrated that today. I am very grateful and I know the family is,” Patterson responded.

The two Republicans on the committee, Tyler Diep (R-Westminster) and Tom Lackey (R-Palmdale) voted in favor of the bill. Jones-Sawyer, Quirk, Bauer-Kahan, Kamlager-Dove, and Wicks abstained. Miguel Santiago (D-Los Angeles) was not present during the vote.