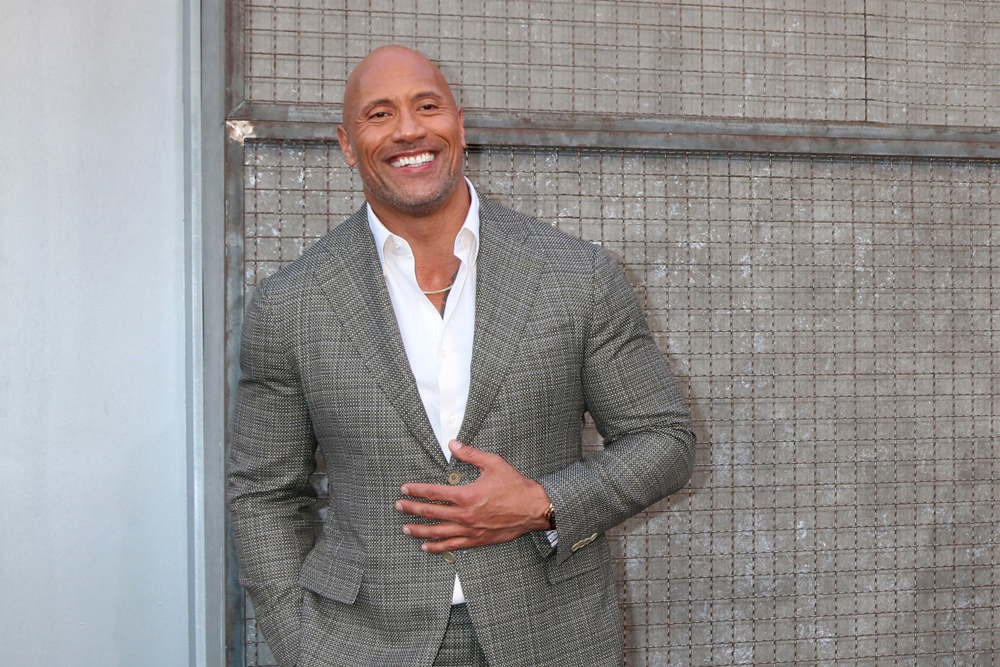 As Black History Month wraps up, here is a list of my Top 10 Black Wrestlers since 1980. Why 1980? That’s the decade I became a wrestling fan.

This list is subjective and from the perspective of a white, California-bred wrestling enthusiast who occasionally gets to write about the subject. My criteria included success in the ring, contributions to the wrestling industry, and advancements of blacks in what has traditionally been a tough business for people of color to thrive. 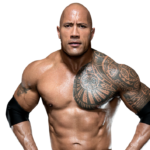 1. The Rock
I wrestled (pun intended) with adding The Rock, as his Samoan ethnicity has always been played up stronger than his African-American roots. His father, Rocky Johnson, was black; his grandfather, Peter Maivia, was Samoan.
But, this list would be incomplete without The Rock, and incomplete with him not being No. 1. After all, he’s headlined six WrestleManias, won eight WWE championships, one of the top stars of all time, and parlayed all that to become a major Hollywood star. 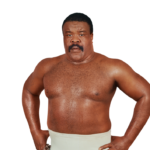 2. Junk Yard Dog
On paper, the concept of JYD as breaking through wrestling’s racial wall was preposterous: a black man wearing a chain around his neck, howling like a dog, and dancing in the ring after a victory.
But, it worked. Fans of all races loved JYD. He was a top draw in the early 1980s in the Mid South territory, which covered Louisiana, Arkansas, Mississippi and Oklahoma, not exactly an area known for its hospitality to African-Americans. Known as the King of New Orleans, JYD owned the Crescent City, virtually guaranteeing a strong house with every appearance.
More so, JYD was a cultural icon in the 1980s WWF national expansion. His image was in cartoons and on toy figures and other merchandise, a position few, if any, black wrestlers previously enjoyed. The WWE inducted him into its Hall of Fame posthumously in 2004. 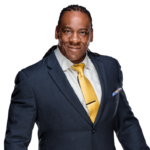 3. Booker T
A six-time world champion, Booker evolved from an ethnically-themed gimmick role into one of the more celebrated wrestlers of his era.
With his real-life brother Stevie Ray, the tag team of Harlem Heat debuted in 1993. As the legend went, the first TV taping saw a white man in a plantation-owner’s outfit leading Harlem Heat to the ring with chains. Fortunately, if this legend was true, it never made air.
Harlem Heat interjected “Ebonics” into their interviews, with liberal use of the term “sucka.” Booker even let slip the N-word when talking about Hulk Hogan.
When Booker went solo, fans recognized he was more than just a gimmick, he was a darn great all-around pro wrestler. While mostly inactive now, Booker can still be seen on WWE broadcasts. The company inducted him to its Hall of Fame in 2013. 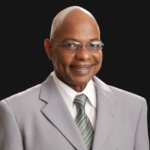 4. Teddy Long
Because of pro wrestling’s long and largely unrecorded history, there are never truly any “firsts.” But consider this: Teddy Long was a referee, when there were few, if any, black referees in the 1980s. He was a top-level manager when the only other black manager at the time dressed and acted like a pimp (see Slick below). He became an authority figure as general manager in the 2000s when no other person of color held such a role.
Whenever he appeared on camera as general manager, Long’s office had pictures of two men — the Rev. Martin Luther King Jr., who fought for racial justice, and Vince McMahon who gave him the opportunity. He became a WWE Hall of Famer in 2017. 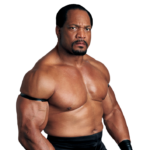 5. Ron Simmons/Faarooq
At one point in Simmons’ athletic career, he was a two-time All-American defensive lineman for Florida State. While a lengthy pro football career didn’t pan out, he used those legitimate athletic credentials for a Hall of Fame wrestling career.
The high point came in 1992, when Simmons became the first African-American to win a major promotion (i.e. WCW, WWF/WWE) world title.
While that glory faded in the intervening years, Simmons reinvented himself as Faarooq, the Jim Brown-inspired leader of the Nation of Domination. He later teamed with Bradshaw to form the APA, one of the toughest tag teams of the era.
And, more importantly for the Attitude Era of the late 1990s/early 2000s, Simmons developed the signature catchphrase, “Damn!” 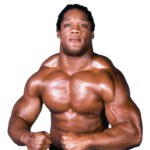 6. Tony Atlas
In the early 1980s, stardom could be measured by appearances on Superstation TBS. Its weekly Saturday night cable wrestling show was the only one at the time to be seen coast to coast. Atlas, with his immaculate bodybuilder physique, was one of the top stars.
Atlas headlined most territories he worked in the first half of the 1980s, thanks to his exposure. He was one of the top black stars of that time, second perhaps only to Junk Yard Dog.
While he never achieved a major singles championship, he did win the WWF tag team title with Rocky Johnson (father of #1 on the list) in 1983. In doing so, they became the first all-black champions in the promotion’s history.
The WWE inducted Atlas into its Hall of Fame in 2006. 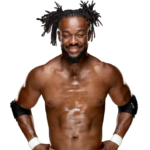 7. Kofi Kingston
Kingston is the only wrestler still in his prime on this Top Ten list. In fact, he just wowed the WWE Universe with his performance at the Elimination Chamber Sunday (Feb. 17), which may just lead to a WrestleMania title shot.
Debuting with the WWE in 2008, Kingston is known for his athletic aerial style. The last few years, he’s been part a trio called The New Day. It took a few years, but fans warmed up to the interviews and antics of the group.
The man, who’s been billed as being from Jamaica or Ghana, is best known for his Houdini-like abilities to avoid eliminations in the annual Royal Rumble match.
For the purpose of this list, I’ll lump Kingston as an American, whether he was born here or not. I can’t say I’ve seen his birth certificate.

8. Mark Henry
Henry’s career was nearly a bust before it boomed. Signed in 1996 before the Atlanta Olympics, Henry was expected to medal in weightlifting and parlay that into a WWE career. The medals didn’t happen, and Henry broke his leg shortly after debuting in the ring.
But, when you are 400-plus pounds and billed as the World’s Strongest Man, opportunities will never cease. Henry took advantage of chance after chance, finally winning the World Heavyweight championship and earning induction into the WWE Hall of Fame in 2018. 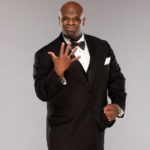 9. D-Von Dudley
“D-Von, get the table!”
In an era when catchphrases meant more than what a wrestler could do in the ring, D-Von Dudley excelled at both.
Emerging from a gimmick of a gaggle of geeky looking mismatched brothers in the original ECW, D-Von survived with his partner and “half-brother” Bubba Ray Dudley to become the most decorated tag team champions of all time.

10. Shelton Benjamin
The veteran is still active in the WWE rings, and at one point was considered the most naturally gifted athlete in the promotion.
A former collegiate star at the University of Minnesota, Benjamin won numerous singles and tag team championships and wowed fans with his array of moves. Of the men on this list, Benjamin is probably the best in-ring competitor.

Ernie Ladd
If this list included stars from the 1970s, Ladd would be Top Three. By the 1980s, Ladd was well beyond his shelf life.
Koko B. Ware
While never main eventing in his WWF tenure, it’s hard not to think of Ware and his colorful ring outfit and ever-present mascot, the parrot Frankie.
Iceman King Parsons
Parsons was one of the top babyfaces when World Class was based out of Dallas, behind the Von Erich brothers. He had the elements to make him a national star — the look, gift of gab, and natural charisma. Unfortunately, it never happened.

Slick
The manager billed as the “Doctor of Style” may have had the catchiest theme music of the 1980s (“Jive Soul Bro”), but dressing up like a pimp, and other mannerisms portrayed the worst of African-American stereotypes.
The Godfather
While Slick was alluded to as being a pimp, that was the over-the-top gimmick of The Godfather in the 1990s. He offered “ho’s” as prizes to his opponents to forfeit a match, and advocated for “Smoking a fatty for this Pimp Daddy!” No, that gimmick did not age well.
Kamala
Kamala’s place here isn’t based on lack of success. He was a top heel anywhere he went in the 1980s. But, the basis of his gimmick — an unintelligent savage from Uganda — isn’t exactly a watershed moment for black pride.