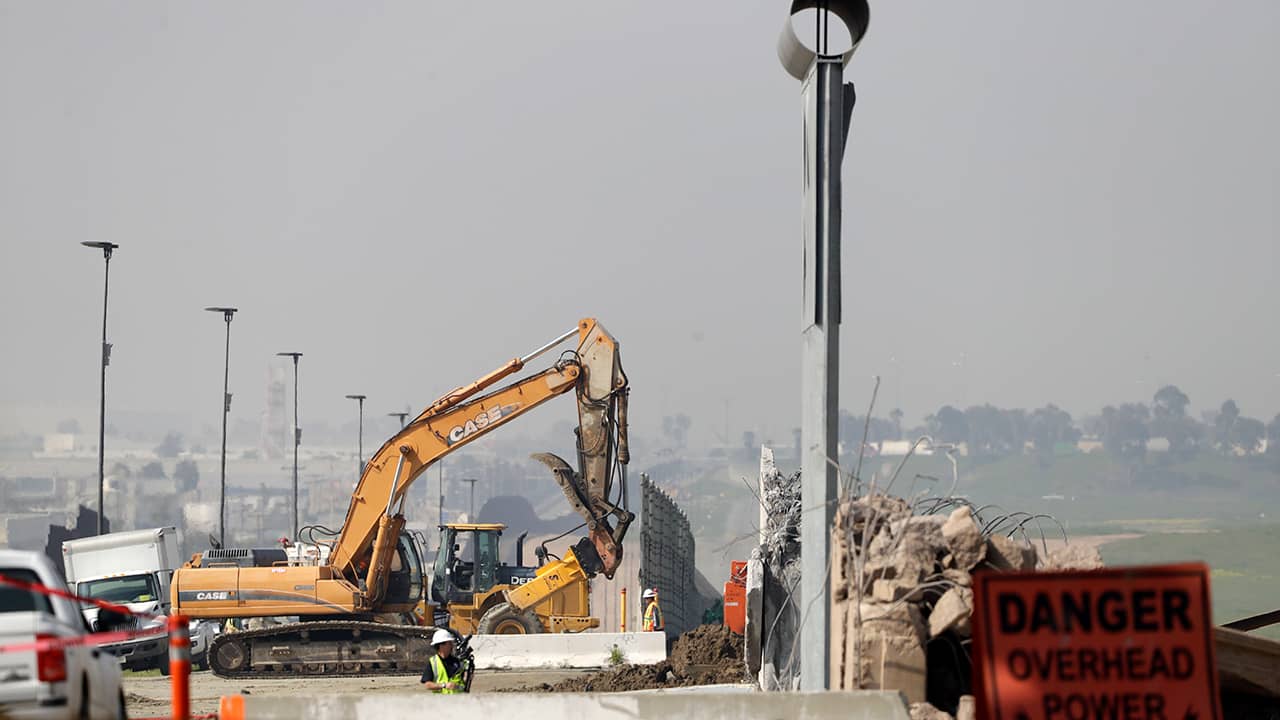 SAN DIEGO — The government is demolishing eight prototypes of Donald Trump’s prized border wall that instantly became powerful symbols of his presidency when they were built nine months after he took office.
The Trump administration says elements of the prototypes have been melded into current border fence designs and they have served their purpose.

People climbed piles of trash against a short border fence that has since been replaced to get a clear view from Mexico. Some asylum-seekers hoisted their children over the fence in front of construction crews to turn themselves in to agents.
Their removal makes way to extend a second layer of barrier with steel bollards, similar to slats, topped by a metal plate rising 30 feet from the ground, the same design being used elsewhere on the border. The new barrier vaguely resembles some of the steel prototypes but looks nothing like the solid concrete panels, which were widely panned because border agents can’t see what’s happening on the other side.
The nearly $3 billion that Congress has provided for barriers during the first half of Trump’s term requires that money be spent on designs that were in place before May 2017, effectively prohibiting the prototypes from being used and denying Trump bragging rights to say he built his wall. It’s unclear if the restriction would apply to the billions of dollars that Trump wants to spend by declaring a national emergency on the nation’s southern border.
The prototypes are coming down during the same week that the House voted to block Trump’s emergency declaration.

The eight prototypes, which cost $300,000 to $500,000 each to build, vary by slopes, thickness and curves. Bidding guidelines called from them to withstand at least an hour of punishment from a sledgehammer, pickaxe, torch, chisel or battery-operated tools and to prevent use of climbing aids such as grappling hooks.
The guidelines also required they be “aesthetically pleasing” from the U.S. side. One has two shades of blue with white trim. The others are gray, tan or brown — in sync with the desert.

The Department of Homeland Security redirected $20 million from its budget in February 2017, a month after Trump took office, to pay for the prototypes and smaller mock-ups built farther from the border that have already been dismantled. The open bidding generated a wide range of ideas, some of them whimsical or far-fetched. One bidder wanted a wall large enough for a deck that would offer tourists scenic views of the desert.
Bidders met fierce criticism from wall opponents. The Roman Catholic Archdiocese of Mexico said any Mexican companies who expressed interest were betraying their country.

A Long Presence of Border Activity

The new barrier replaces a steel-mesh fence that runs more than 12 miles from the Pacific Ocean, which worked like a fortress when it was built a decade ago but is now regularly breached with powerful battery-operated saws recently made available in home improvement stores. It will then extend another mile or so over the prototype site. SLSCO Ltd. of Galveston, Texas, won the $101 million contract in December and started work last week.
Work on replacing the first-layer barrier, also with steel bollards and metal plates up to 30 feet high, runs the same length as the second layer and is nearly finished. The previous first-layer barrier was a short fence.
The prototypes and new construction continue a long presence of border activity in the adjoining Tijuana neighborhood, initially occupied by squatters who later bought the land. Guillermina Fernandez, who sells plants out of her home and at a public market, said smugglers once brought large groups of migrants and dug small holes under the old fence.

About 15 years ago, Fernandez, 54, briefly turned her patio into a dining area for migrants. Campfires kept people warm while waiting for an opening to dart past Border Patrol agents.
“It looked like a party here,” she said.
Illegal crossings in San Diego have fallen dramatically since barriers were installed in the 1990s and mid-2000s, but some migrants go around them and others go over them.
Residents complain that outsiders illegally dump trash on their dirt roads that lack street lights. They say the new wall has produced one benefit: The bollards allow the Border Patrol’s bright lights to seep in and provide some visibility at night.
Related Topics:border fencedemolishingDonald TrumpgovernmentpresidencyprototypesSan Diego
Up Next

Trump-Kim Go One-on-One: Who Will Know What Was Really Said?