The controversial question of where the public should be allowed to access to the San Joaquin River for recreational activity is up for debate once again.

Like last time, there is considerable disagreement on the best path.

In Dec. 2017, the San Joaquin River Conservancy Board voted for a plan to build the access point through a Fresno city park, Spano Park (known as Alternate 5B), where Palm and Nees avenues meet in north Fresno. That decision came after months of contentious debate.

Spano Park sits atop a bluff. The proposal calls for construction of a winding road down to the river to provide access, along with a parking lot and trail facilities.

That expansive plan won over another option, which would allow access through an existing gate nearby at Riverview Drive (known as Alternate 1) in the river bluff neighborhood adjacent to West Audubon Drive.

Related Story: Question About His River Access Vote Gets Under Brandau’s Skin

In an 8-6 vote, the board approved the Spano Park plan and set a one-year timeline to achieve certain project benchmarks. If those goals were not met, the board allowed itself the discretion to revisit its decision.

This week, the board is scheduled to vote on whether to exercise that discretion. It will meet on Wednesday (Feb. 27, 10:30 a.m. at Fresno city council chambers) and could decide to put Spano Park on the backburner, and start the process to open the Riverview Drive access point.

If the board does move away from Spano Park, supporters on that side say more litigation could be coming.

A Matter of Benchmarks 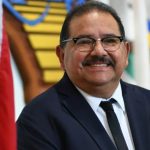 River board member Julie Vance feels the Spano Park option has not met the required benchmarks, which include gathering proper land use permissions and achieving engineering goals. Vance is the Fresno-based regional director for the state Dept. of Fish and Wildlife. She proposed the one-year benchmark check as a condition of the Dec. 2017 vote.

Asked if the last year has been frustrating, she replied “very. The board hasn’t been involved in addressing these benchmarks. That is all on SJRAC. The only role we have is to be able to review what is brought before us. Unfortunately, we didn’t get much brought before us until real late in the year,” she said.

The SJRAC is the San Joaquin River Access Corporation, a private group of river bluff neighbors who organized to acquire land below Spano Park. The group’s legal counsel sent the board a letter that SJRAC “absolutely” met its benchmarks.

Tom Beggs with SJRAC says his group spent a minimal amount for the land ($1), but legal and engineering costs are approaching the six-figure mark.

“Those who misrepresented that they were not met are totally wrong,” Beggs said.

Another skeptical river board member is newcomer Santos Garcia, a Madera city councilman. To explain his view, he quotes the line from the Joni Mitchell song, “pave paradise and put up a parking lot.”

Beggs disagrees with that too.

“We are not gutting Spano Park, as presented by the opposition to what we are proposing,” Beggs said. He notes that most of the trees that would be removed in the Spano Park plan are already diseased.

Related Story: Fed Up, He Takes on River West Trash With His Own Hands 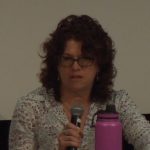 “I personally don’t really care where it happens, as long as we have access because frankly, the property was acquired so long ago and the people of Fresno have waited too long.” — River board member Julie Vance

Just like during the Dec. 2017 debate, the board is still contending with competing factions favoring either the Spano Park or Riverview Drive options. Supporters of both groups cite the environment, costs and ease of access as to why they believe their choice is the best.

“I personally don’t really care where it happens, as long as we have access because frankly, the property was acquired so long ago and the people of Fresno have waited too long,” Vance said.

Another board newcomer, Fresno County supervisor Nathan Magsig, said as much.

“My goal is to get public access to the river as quickly as possible. So, that’s what the expectation is from the community,” Magsig said.

On Tuesday (Feb. 26), the Fresno County Board of Supervisors agreed on a letter of support in favor of the Spano Park option.

Garcia says the Riverview oppositions is a matter of NIMBYism. Beggs feels there is a legitimate concern about increased traffic in a residential neighborhood.

And, Beggs said his group may sue if the river board changes access points.

“Oh, very much,” Beggs said. “The liability is not just from our corporation, but again from those neighbors that will lose their homes — because they are going have to relocate. Who wants traffic signals in your front yard?”

That is what both Vance and Garcia, in separate interviews, said about the city of Fresno’s involvement.

“Maybe things have been going on in the background, but as far as attendance at board meetings and engaging, they have not,” Vance said.

“They haven’t done anything or put it in writing. The city needs to cooperate by not putting up obstacles,” Garcia said.

Vance pointed out that no one from the city attended the river board’s meeting in January (where a vote was taken but later rescinded — see below). But, the board’s minutes for the Jan. 9 meeting contradict Vance’s statement.

“Basically, what Mayor Brand said was… some people took it as blackmail or threat, that if the board moves forward on Alternative 1, the city would not be a partner for O&M (operation and maintenance) funding. To me that was a pretty important consideration given that we need the city as a partner, ideally, for a major park in the city of Fresno,” Vance said.

Brand, through his communications office, said he will address the board on Wednesday and will not comment publicly until that time.

The board held three votes on this issue at its Jan. 9 meeting. On the question of moving forward with the Spano Park option, the board tied 7-7, thus the motion failed.

A motion asking staff to prepare another report failed 8-6. Finally, a third vote to ask staff to look at Alternate 1/Riverview Drive passed 9-5.

Afterward, SJRAC attorney John Kinsey warned the board in a letter that their votes possibly violated the state’s open meeting laws, namely the Brown Act. According to Kinsey, the January item was listed as discussion only. It needed to be listed differently on the agenda for a vote to take place.

John Shelton, the conservancy’s executive officer, felt discretion was the better part of valor. Instead of potentially fighting the charge in court, it was easier to rescind the vote and try again later.

The board is made up of appointees from state agencies, local government body representatives, and three citizen members (appointed by the governor). The 15 member conservancy board currently has 14 active members. Gov. Gavin Newsom has yet to appoint a citizen member representing Madera County.

Based on the rescinded votes, it appears Magsig’s views on access is in alignment with the man he replaced, former supervisor (now state senator) Andreas Borgeas.

However, Garcia replaced Will Oliver as the Madera city council representative on the board. Garcia willingly admits his views differ from his predecessor. Last November, Garcia won his race for council; Oliver lost his re-election bid in a separate race.

“I think I’m doing the right thing by voting for Alternate 1,” he said.

The board is expected to vote on directing staff to move forward with the current Spano Park plan, or direct staff to prepare plans to consider the Riverview Drive access point.

If the board moves towards the Riverview Drive plan, it could trigger a new round of environmental review.