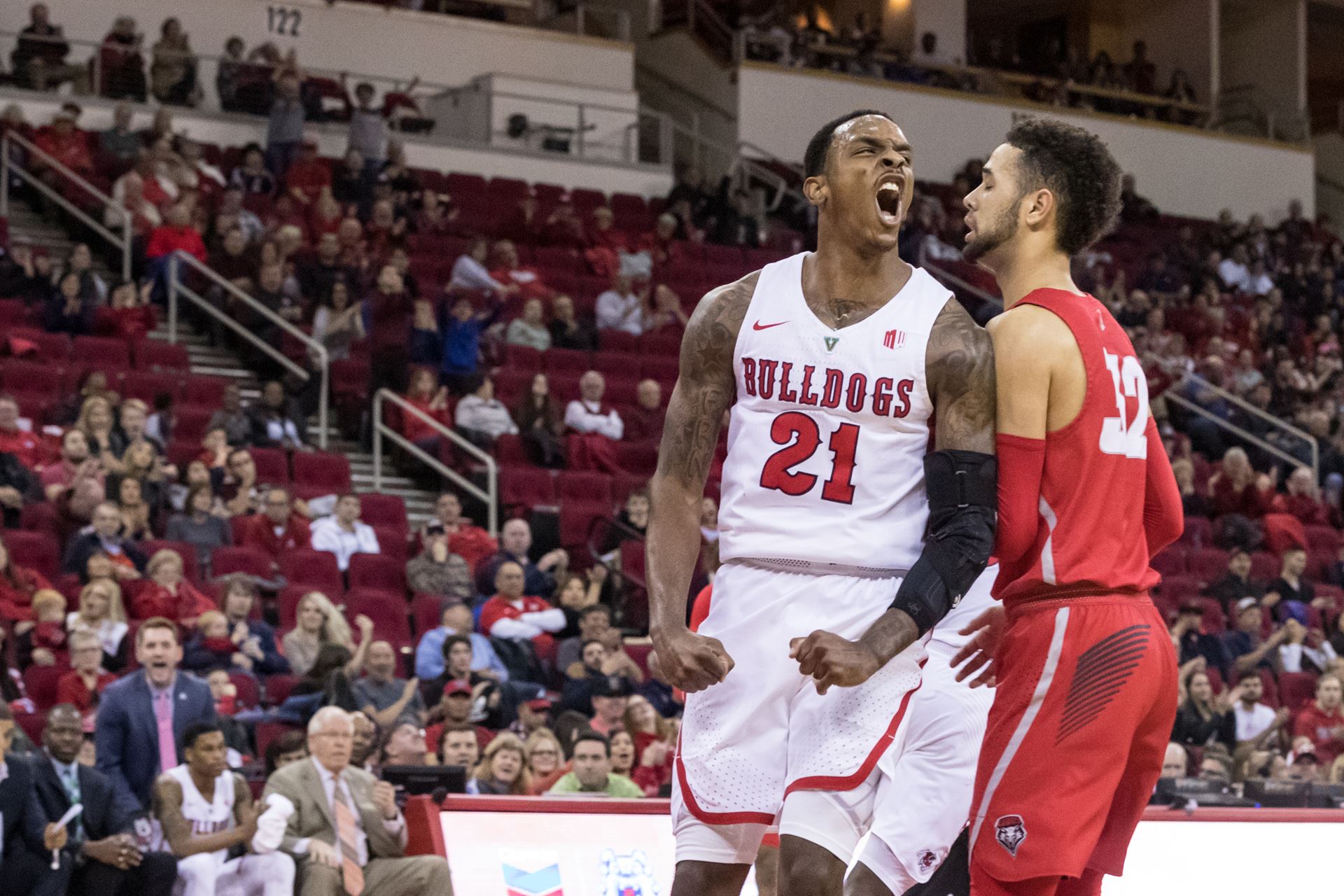 After conquering New Mexico’s “Pit” over the weekend, the Fresno State men’s basketball team enters Wednesday’s 7 p.m. home matchup against Air Force positioned for a high seed in the Mountain West Tournament.
Throw out the Bulldogs’ game Saturday at No. 6 ranked Nevada and their four remaining regular-season opponents have a combined 14-33 record.


“Our staff found a spot for him, a little sweet spot in the zone and Deshon (Taylor) made some penetration and kicked to him and he knocked it down.” Bulldogs coach Justin Huston on Braxton Huggins
In addition, the Bulldogs are continuing their season-long excellence. An 81-73 victory at New Mexico was their fifth win in six games and elevated their overall record to 19-6. With the win, the Bulldogs climbed to 10-3 in Mountain West play, tied for second place with Utah State.
Against the Lobos, the Bulldogs overcame foul trouble and the hot shooting of Vance Jackson, who finished with a career-high 30 for New Mexico (11-14, 5-8).

Taylor, Huggins Too Much for New Mexico

The backcourt duo of Deshon Taylor and Braxton Huggins sustained Fresno State against the Lobos. Taylor scored 26 points, and Huggins scored all 19 of his points in the second half as the Bulldogs rallied from a three-point halftime deficit.
Huggins went scoreless in the opening 20 minutes while picking up three fouls. But he was a key to the second-half effort, hitting a trio of 3s in a 15-6 run that gave the Bulldogs the lead for good.
“Our staff found a spot for him, a little sweet spot in the zone and Deshon made some penetration and kicked to him and he knocked it down,” Bulldogs coach Justin Huston said of Huggins. “He just wasn’t in rhythm in the first half because he was in and out of the game. Braxton can make shots.”

Huggins Is MW Player of the Week

On Monday, Huggins was named the Mountain West Player of the Week. He averaged 22.5 points, 4.0 rebounds, 2.0 assists, and 1.5 blocks while shooting 50 percent from the field (14-for-28). He made seven 3-pointers in leading the Bulldogs to a 2-0 week with wins over Boise State (65-63) and New Mexico.
New Mexico took its biggest lead early in the second half, going up 43-35 following a 3-pointer from Anthony Mathis, who finished with 13. After a quick timeout, Fresno State responded with a 12-0 run to go up 47-43.
“They called a timeout a minute and a half in and they drilled us from there,” Lobos’ coach Paul Weir said. “They went on a run from there that we just couldn’t stop. They recalibrated themselves and we ran out of a little bit of mojo or gas, I don’t know.”

Taylor played 37 minutes against the Lobos, and his 26 points included a career-high five 3-pointers and seven made free throws. He also contributed five assists, three rebounds, and three steals. Another Bulldogs guard, Noah Blackwell, added 11 points and four assists.
“That’s just how the shots presented itself,” Taylor said.  “I know I didn’t want to pass up good shots.  And I felt I had to put more of the scoring on my shoulder when Braxton got into foul trouble.”

Air Force enters Wednesday’s game at the Save Mart Center on a two-game losing streak. The Falcons (10-15, 5-8) have lost nine in a row at Fresno State.  Their last win in Fresno came in 1995.